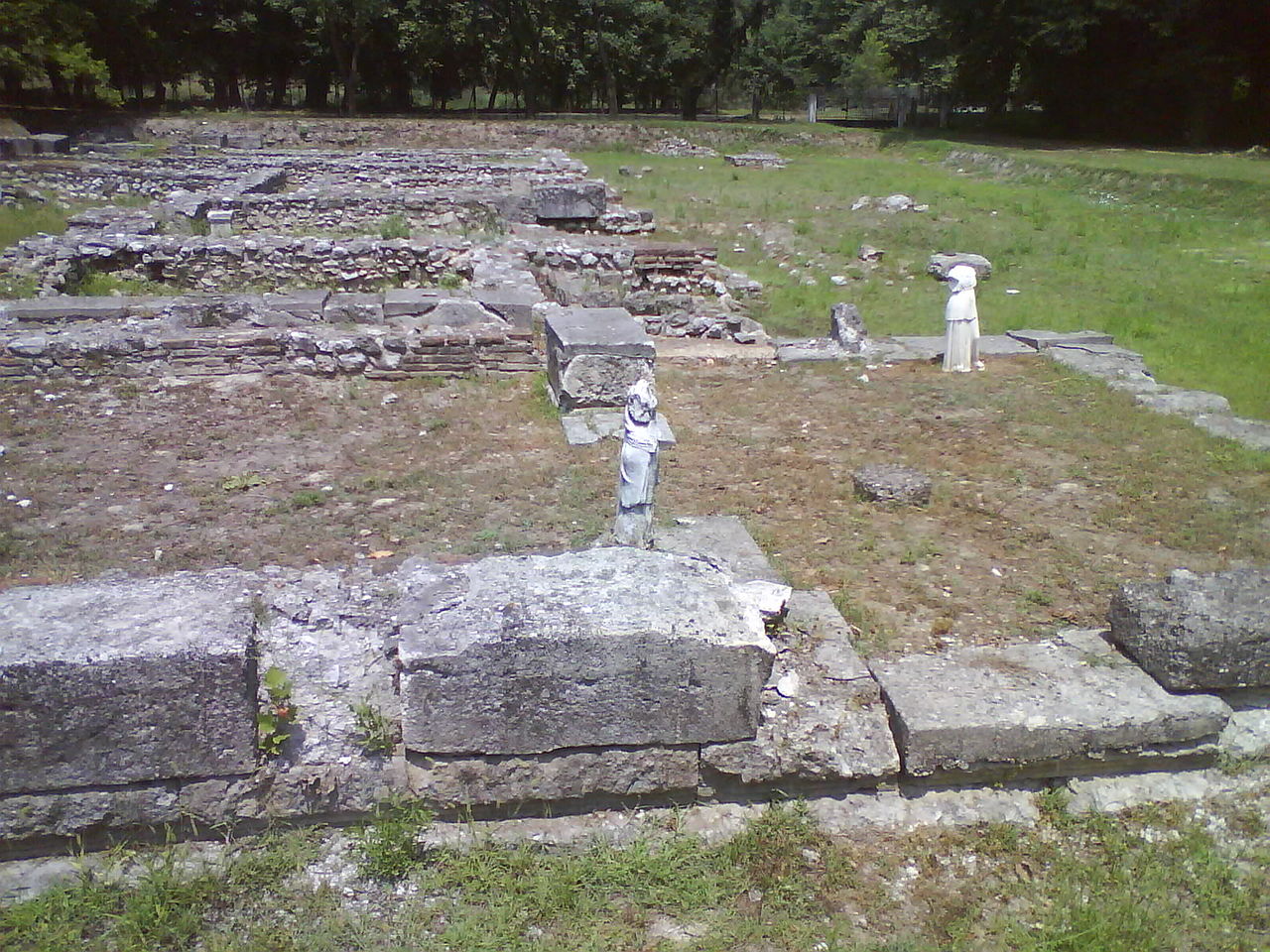 Up to now all that had been done was right and fair according to the laws of war, but what shall I say of that which followed? For mindful of what the Aetolians had done at Dium and Dodona they burnt the colonnades and destroyed the rest of the rich and artistic votive offerings, some of which were most elaborate and expensive works. And not only did they damage the roofs of these buildings by the fire, but razed them to the ground. They also threw down the statues numbering not less than two thousand and destroyed many of them, sparing however, such as represented gods or bore inscribed dedications to gods. On the walls they scribbled the often quoted verse due to Samus, son of Chrysogonus and a foster-brother of the king, whose talent was beginning already at this date to reveal itself:

Seest thou how far the bolt divine hath sped?

and the king and his intimates indeed had a perverse conviction that they were acting rightly and properly in thus retaliating upon the Aetolians for their sacrilegious treatment of Dium. I am quite of the opposite opinion, and we have the material at hand for judging if I am right or not, by taking examples not from elsewhere but from the previous history of this royal house.

Ruins in Dion (‘Dium’ in Latin)

When Antigonus after defeating Cleomenes king of the Lacedaemonians in a pitched battle became master of Sparta and had absolute authority to treat the city and citizens as he chose, so far from injuring those who were at his mercy, he restored to them on the contrary their national constitution and their liberty, and did not return to Macedonia before he had conferred the greatest public and private benefits on the Lacedaemonians. Not only therefore was he regarded as their benefactor at the time but after his death he was venerated as their preserver, and it was not in Sparta alone but throughout Greece that he received undying honour and glory in acknowledgement of this conduct.

Again Philip, who first raised their kingdom to the rank of a great power and the royal house to a position of splendour, did not, when he conquered the Athenians in the battle of Chaeronea, obtain so much success by his arms as by the leniency and humanity of his character. For by war and arms he only defeated and subjugated those who met him in the field, but by his gentleness and moderation he brought all the Athenians and their city under his domination, not letting passion push him on to further achievement, but pursuing the war and striving for victory only until he found a fair occasion for exhibiting his clemency and goodness. So he dismissed the prisoners without ransom, paid the last honours to the Athenian dead, entrusting their bones to Antipater to convey to their homes, gave clothes to most of those who were released, and thus at a small expense achieved by this sagacious policy a result of the greatest importance. For having daunted the haughty spirit of the Athenians by his magnanimity, he gained their hearty co-operation in all his schemes instead of their hostility. And take Alexander. Though so indignant with the Thebans that he sold the inhabitants into slavery and razed the city to the ground, yet he was so far from neglecting the reverence due to the gods when he captured the city, that he took the most anxious care that not even any unintentional offence should be committed against the temples and holy places in general. Even when he crossed to Asia to chastise the Persians for the outrages they had perpetrated against the Greeks, he strove to exact the punishment from men that their deeds deserved, but refrained from injuring anything consecrated to the gods, although it was in this respect that the Persians had offended most while in Greece.

With these examples constantly present to his mind Philip should now have shown himself to be the true heir and successor of those princes, not inheriting so much their kingdom as their high principles and magnanimity. But, instead of this, though all through his life he was at great pains to prove that he was allied in blood to Alexander and Philip, he was not in the least anxious to show himself their emulator. Therefore since his practices were the reverse of theirs, as he advanced in years his general reputation came to be also the reverse.

His conduct on the present occasion is an instance of the difference. For in allowing his passion to make him the rival of the Aetolians in their impiety, and thus trying to cure one evil by another, he thought he was doing nothing wrong. He was constantly reproaching Scopas and Dorimachus with brutality and lawless violence, alleging their outrages on religion at Dodona and Dium, but never reflected that he himself by behaving in precisely the same manner would earn the same reputation among the very people he was addressing. For it is one thing to seize on and destroy the enemy’s forts, harbours, cities, men, ships, crops and other things of a like nature, by depriving him of which we weaken him, while strengthening our own resources and furthering our plans: all these indeed are measures forced on us by the usages and laws of war. But to do wanton damage to temples, statues and all such works with absolutely no prospect of any resulting advantage in the war to our own cause or detriment to that of the enemy must be characterized as the work of a frenzied mind at the height of its fury. For good men should not make war on wrong-doers with the object of destroying and exterminating them, but with that of correcting and reforming their errors, nor should they involve the guiltless in the fate of the guilty, but rather extend to those whom they think guilty the mercy and deliverance they offer to the innocent. It is indeed the part of a tyrant to do evil that he may make himself the master of men by fear against their will, hated himself and hating his subjects, but it is that of a king to do good to all and thus rule and preside over a willing people, earning their love by his beneficence and humanity.

We can but realize the gravity of Philip’s error by picturing to ourselves, what opinion of him the Aetolians would have held if he had done just the reverse, and had neither destroyed the colonnades and statues nor damaged any of the votive offerings. For my own part I think it would have been the best and kindest opinion, since they were conscious of their crimes at Dium and Dodona and would have been well aware that Philip was now at liberty to do exactly what he wished, and even if he acted most ruthlessly would be held to have done right as far at least as concerned themselves, but that owing to his gentle and magnanimous spirit he had chosen to avoid acting in any respect as they had done.

It is evident from this, that they would naturally have condemned themselves, and approved and admired Philip, as having acted nobly and like a king in thus respecting religion and curbing his just anger against themselves. And surely to conquer one’s enemies by generosity and equity is of far higher service than any victory in the field; for to arms the vanquished yield from necessity, to virtue from conviction; in the one case the correction of error is made with much sacrifice, in the other the erring are guided to better ways without suffering hurt. And, what is of greatest moment, in the one case the achievement is chiefly the work of subordinates, in the other the victory is solely due to the commander.

Ruins of the sanctuary of Zeus Naios, Dodona

One thought on “Polybius’ timeless and valuable notions on ‘civilized’ War; the Greeks were destroying their own temples long before the ‘Barbarian Invasions’”