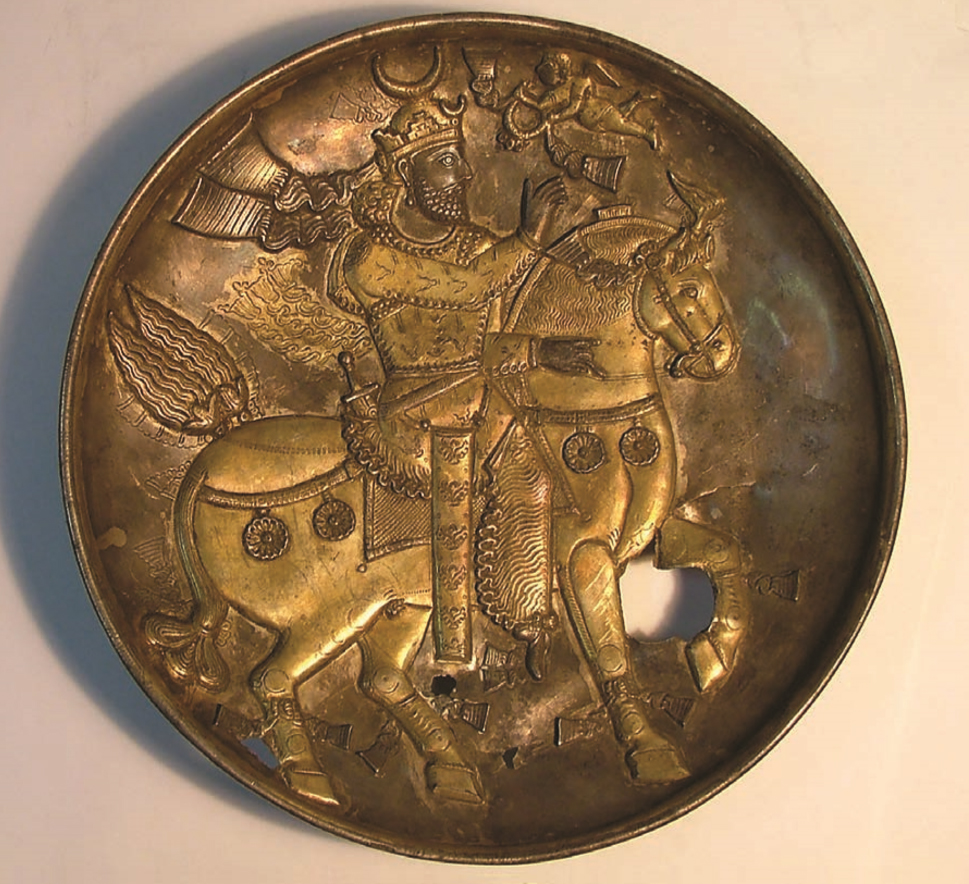 The slackness with which the generals of Justinian prosecuted the Gothic war in the period between the triumph of Belisarius at Ravenna in A. D. 540, and the final conquest of Italy in A. D. 553, is mainly to be explained by the fact that, just at the moment of the fall of Ravenna, the empire became involved in a new struggle with its great Eastern neighbour.

Plate depicting Khosrow I (Chosroes I)

Chosroes of Persia was seriously alarmed at the African and Italian conquests of Justinian, and remembered that he too, as well as the Vandals and Goths, was in possession of provinces that had formerly been Roman, and might one day be reclaimed by the Emperor. He determined to strike before Justinian had got free from his Italian war, and while the flower of the Roman army was still in the West. Using as his pretext for war some petty quarrels between two tribes of Arabs, subject respectively to Persia and the empire, he declared war in the spring of A.D. 540. Justinian, as the king had hoped, was caught unprepared: the army of the Euphrates was so weak that it never dared face the Persians in the field, and the opening of the war was fraught with such a disaster to the empire as had not been known since the battle of Adrianople, more than a hundred and sixty years before. Avoiding the fortresses of Mesopotamia, Chosroes, who led his army in person, burst into Northern Syria. His main object was to strike a blow at Antioch, the metropolis of the East, a rich city that had not seen an enemy for nearly three centuries, and was reckoned safe from all attacks owing to its distance from the frontier. Antioch had a strong garrison of 6,000 men and the “Blues” and “Greens” of its circus factions had taken arms to support the regular troops. But the commander was incompetent, and the fortifications had been somewhat neglected of late. After a sharp struggle, Chosroes took the town by assault; the garrison cut its way out, and many of the inhabitants escaped with it, but the city was sacked from cellar to garret and thousands of captives were dragged away by the Persians. Chosroes planted them by the Euphrates and built for them a city which he called Chosroantiocheia, blending his own name with that of their ancient abode.

This horrible disaster to the second city of the Roman East roused all Justinian’s energy; neglecting the Italian war, he sent all his disposable troops to the Euphrates frontier, and named Belisarius himself as the chief commander. After this, Chosroes won no such successes as had distinguished his first campaign. Having commenced an attack on the Roman border fortresses in Colchis, far to the north, he was drawn home by the news that Belisarius had invaded Assyria and was besieging Nisibis. On the approach of the king the imperial general retired, but his manoeuvre had cost the Persian the fruits of a whole summer’s preparation, and the year A.D. 541 ended without serious fighting. In the next spring very similar operations followed: Belisarius defended the line of the Euphrates with success, and the invaders retired after having reduced one single Mesopotamian fortress. The war lingered for two years more, till Chosroes, disgusted at the ill-success of all his efforts since his first success at Antioch, and more especially humiliated by a bloody repulse from the walls of Edessa, consented to treat for peace [A.D. 545]. He gave up his conquests—which were of small importance—but regarded the honours of the war as being his own, because Justinian consented to pay him 2,000 lbs. of gold on the ratification of the treaty. One curious clause was inserted in the document—though hostilities ceased everywhere else, the rights of the two monarchs to the suzerainty of the kingdom of Lazica, on the Colchian frontier, hard by the Black Sea, were left undefined. For no less than seven years a sort of by-war was maintained in this small district, while peace prevailed on all other points of the Perso-Roman frontier. It was not till A.D. 556, after both parties had wasted much treasure and many men on the unprofitable contest, that Chosroes resigned the attempt to hold the small and rugged mountain kingdom of the Lazi, and resigned it to Justinian on the promise of an annual grant of ∼400 lbs. of gold as compensation money.

But although Justinian had brought his second Persian war to a not unsuccessful end, the empire had come badly out of the struggle, and was by 556 falling into a condition of incipient disorder and decay. This was partly caused by the reckless financial expedients of the Emperor, who taxed the provinces with unexampled rigour while forced to maintain at once a Persian and an Italian war.

The main part of the damage, however, was wrought by other than human means. In A.D. 542 there broke out in the empire a plague such as had not been known for three hundred years—the last similar visitation had fallen in the reign of Trebonianus Gallus, far back in the third century. This pestilence was one of the epoch-making events in the history of the empire. The details which Procopius gives us concerning its progress and results leave no doubt that it operated more powerfully than any other factor in that weakening of the empire which is noticeable in the second half of the sixth century. When it reached Constantinople, 5,000 persons a day are said to have fallen victims to it. All customary occupations ceased in the city, and the market-place was empty save for corpse-bearers. In many houses not a single soul remained alive, and the government had to take special measures for the burial of neglected corpses. “The disease,” says the chronicler, “did not attack any particular race or class of men, nor prevail in any particular region, nor confine itself to any period of the year. Summer or winter, North or South, Greek or Arabian, washed or unwashed—of such distinctions the plague took no account. A man might climb to the hill-top, and it was there; he might retire to the depths of a cavern, and it was there also”. The only marked characteristic of its ravages that the chronicler could find was that, “whether by chance or providential design, it strictly spared the most wicked”.

Justinian himself fell ill of the plague: he recovered, but was never his old self again. Though he persevered inflexibly to his last day in his scheme for the reconquest of the empire, yet he seems to have declined in energy, and more especially to have lost that power of organization, which had been his most marked characteristic. The chroniclers complain that he had grown less hopeful and less masterful. As Agathias wrote: “After achieving so much in the days of his vigour, when he entered into the last stage of his life he seemed to weary of his labours, and preferred to create discord among his foes or to mollify them with gifts, instead of trusting to his arms and facing the dangers of war. So he allowed his troops to decline in numbers, because he did not expect to require their services. And his ministers, who collected his taxes and maintained his armies were affected with the same indifference”.

One thought on “The last years of Justinian’s reign: Antioch sacked by Chosroes’ Persians – The Plague irreversibly weakens the Empire”