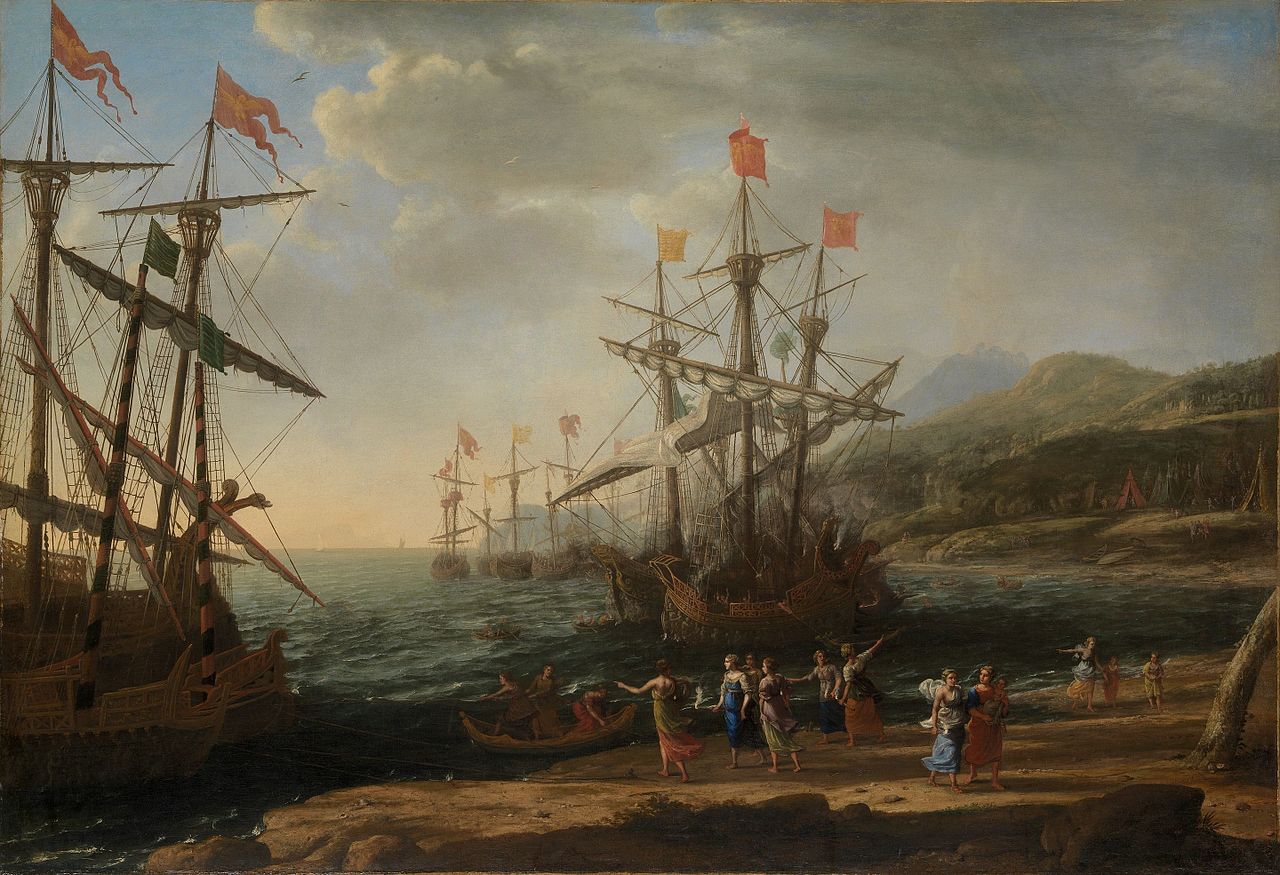 In this post we present an excerpt from Plutarch’s ‘Moralia’.

On The Bravery of Women I

Most of those that escaped from Troy at the time of its capture had to weather a storm, and, because of their inexperience in navigation and ignorance of the sea, were driven upon the shores of Italy, and, in the neighbourhood of the river Tiber, they barely escaped by running in, under compulsion, where there were anchorages and havens. While the men were wandering about the country, in search of information, it suddenly occurred to the women to reflect that for a happy and successful people any sort of a settled habitation on land is better than all wandering and voyaging, and that the Trojans must create a fatherland, since they were not able to recover that which they had lost. Thereupon, becoming of one mind, they burned the ships, one woman, Roma, taking the lead. Having accomplished this, they went to meet the men who were hurrying to the sea to save the ships, and, fearful of their anger, some embraced their husbands and some their relatives, and kissed them coaxingly, and mollified them by this manner of blandishment. This is the origin of the custom, which still persists among the Roman women, of greeting their kinsfolk with a kiss.

The Trojans, apparently realizing the inevitable necessity, and after having also some experience with the native inhabitants, who received them kindly and humanely, came to be content with what had been done by the women, and took up their abode there with the Latins.

NovoScriptorium: Plutarch, as many other ancient authors, takes for granted that the Trojan refugees were one of the constituting components of the Roman polity.

The Trojans were persuaded by their women’s desire to stay in Italy, according to the author.

The custom of women greeting their kinsfolk with a kiss was an ancient  Roman custom that still persists around the Mediterranean.

Plutarch indirectly suggests that the name ‘Roma‘ (the name of the great city) initially derived from the name of a Trojan lady. It has to be said here that the name itself derives from Greek;  the form ‘Rom-a‘ is a word ending coming from the Doric dialect, while the form ‘Rom-e’ comes from the Ionian one. “Ρώμα or Ρώμη” (Roma or Rome) in Greek means “physical strength, power”. In other words, Plutarch apparently was among the ancient writers who believed in the Greek origin of both Romans and Trojans.

The native inhabitants, the Latins, welcomed the Trojans kindly and humanely. But, who were those locals? According to Dionysius of Halicarnassus, they were mostly of Greek origin (1, 2, 3) and so were the Trojans themselves.