5) The Payment and Rations

As we fleetingly mentioned before in the article, the Byzantine army was relatively well paid, especially when compared to the European realms of the contemporary time period. In terms of actual figures, a regular Thema soldier was possibly paid one (or one-and-a-half) gold coin, known as the nomismata, per month. Each nomismata weighed around 1/72th of a pound, which equates to 1/6 to 1/4th of a pound of gold for the individual soldier per year. This increased to 3 pounds of gold per year for a ‘fifth-class’ strategos and 40 pounds of gold per year for a ‘first-class’ strategos. It should also be noted that additionally, these farmer-soldiers held their grants of land, which theoretically were valued over 4 pounds of gold.

Now of course, much like their ancient Roman predecessors, that payment system must have had its limitation. For example, Emperor Constantine VII (or Porphyrogenitus – ‘the Purple-born’), the son of Leo VI the Wise, talked about how the Byzantine army at the provincial level was paid once in four years in the ‘old times’. This could have meant that the provincial troops served in a cyclic manner, thus alluding to the rota system that possibly came into force every three years, which in turn might have provided a fresh batch of permanent soldiers for each year. However, on the other hand, Arabic sources mention how most of the Byzantine forces (circa 9th century AD) were only paid once in four or five years, thus suggesting how the comprehensive payment scale occasionally put a strain on the treasury of the Empire.

In any case, the payment was also complemented by a rationing system, with dedicated rations being provided to the Thema soldier during his active duty. And like in many contemporary military cultures, the provisions were often bolstered by spoils and plunders gathered during both quick raids and extensive campaigns. And interestingly enough, once again in stark comparison to early medieval European armies, disabled soldiers were expected to be endowed with pensions, while the widows of those who were killed in action were given a considerable sum of 5 pounds of gold (at least during the peak of the Byzantine army in circa 9th century AD).

Till now we have talked about the Themata army of the Byzantine Empire (circa 8th – 10th century AD). But the provincial troops were supported by the better-equipped and highly-trained Tagmata, the permanent guard regiments based in and around the capital of Constantinople. In essence, these elite units took the role of the nucleus of the early medieval Byzantine army, and were possibly formed by Emperor Constantine V. Pertaining to the latter part, the Tagmata were thus perceived as the Eastern Roman Emperor’s own regiments who took the field only when their ruler set out to a campaign. But reverting to practical circumstances, during such military scenarios, some of the elite Tagma units must have also stayed back at Constantinople to guard the capital, while a few others were probably even committed to garrison duties in the proximate provinces like Macedonia and Thrace.

The Scholai (Σχολαί, ‘the Schools’), probably the senior-most unit in the Tagmata, were the direct successors of the Imperial Guards established by none other than Constantine the Great. The other three principal regiments that were considered among the Tagmata ‘proper’ are as follows – the Exkoubitoi or Exkoubitores (‘Sentinels’), the Arithmos (‘Number’) or Vigla (‘Watch’), and the Hikanatoi (‘the Able Ones’) who were established by Emperor Nikephoros I in early 9th century AD. There were also some other regiments that were occasionally counted in the imperial Tagmata roster, including the Noumeroi, who were possibly tasked with manning the walls of Constantinople; the Optimatoi (‘the best’), who, in spite of their name, were relegated to a support unit that maintained the baggage train and garrisoned the nearby areas outside the capital; and the Hetaereia Basilike (“the Emperor’s companions”), who probably comprised a mercenary regiment composed of foreigners. There were also situations when men of the Imperial Fleet were inducted into the Tagmata units. 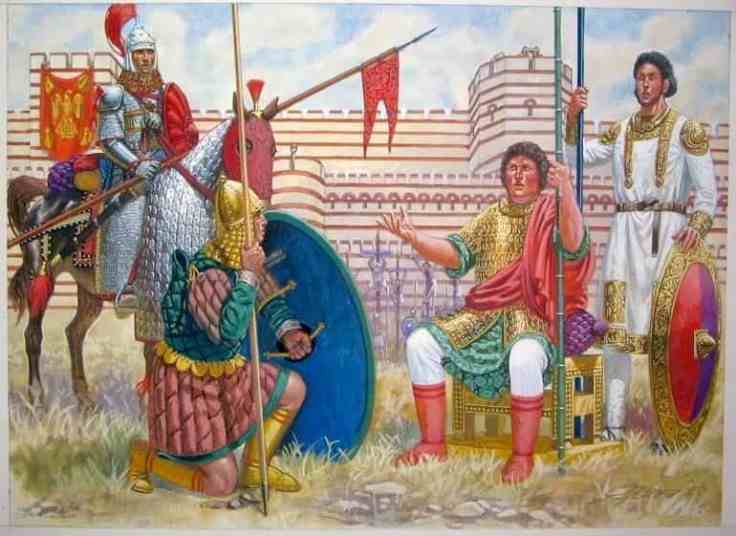 Now when it comes to the number of soldiers of the Byzantine Tagmata, there is a lot of debate in the academic world. Early medieval sources rather mirror this state of confusion, with Procopius writing in the 5th century on how the Scholai was made up of 3,500 men. 10th-century Arab author Qudamah talked about how this number possibly rose to 4,000 per Tagma regiment in the 9th century. However, yet another Arab author, Ibn Khordadbah mentioned how the total strength of the Tagmata army was 6,000 (which makes it 1,500 men per regiment), and they were supported by 6,000 servants. And finally, another historical source of the 10th century described how the Emperor in the campaign should be supported by at least 8,200 horsemen (all of these figures are mentioned in ‘Byzantine Armies 886–1118′ by Ian Heath). Presuming these horsemen to be from the Tagmata, we can surmise that in normal scenarios, the Emperor possibly boasted over 12,000 elite troops – and the number possibly even crossed 25,000 in the later decades of 10th century.

The very term ‘Cataphract’ (derived from Greek Kataphraktos – meaning ‘completely enclosed’ or ‘armored’) is historically used to denote a type of armored heavy cavalry that was originally used by ancient Iranian tribes, along with their nomadic and Eurasian brethren. To that end, the Eastern Romans adopted the cataphract-based mounted warfare from their eastern neighbors – the Parthians (and later Sassanid Persians), with the first units of the heavy cavalry being inducted into the Roman Empire army as mercenaries (probably raised from mounted Sarmatian auxiliaries). And interestingly enough, the subsequent Byzantine army maintained its elite units of cataphracts from antiquity till the early middle ages, thus ironically carrying on the tradition of eastern equestrianism. 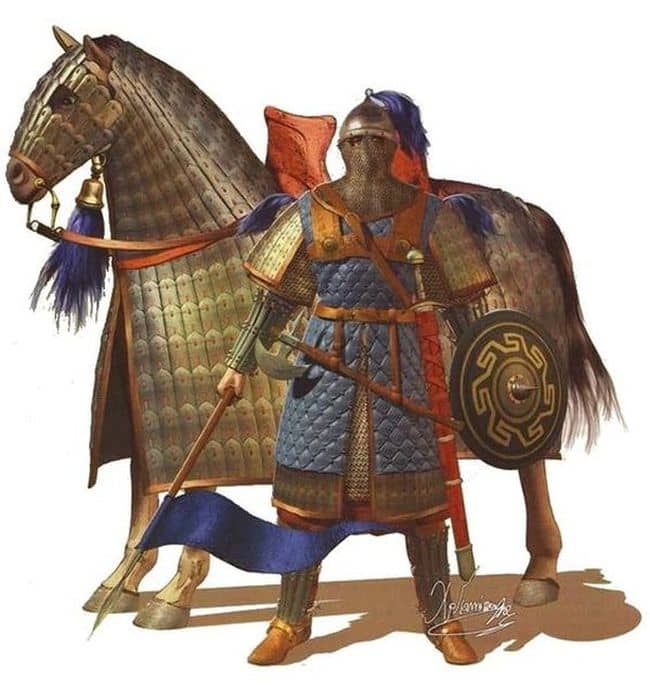 In any case, the Eastern Roman Cataphract of the Byzantine army fielded till the 10th century, was known for its super-heavy armor and weapons (that included maces, bows, and rarely even javelins). Typical contemporary descriptions of the cavalrymen mention the use of klibanion, a type of Byzantine lamellar cuirass that was crafted of metal bits sewn on leather or cloth pieces. This klibanion was often worn over a mail corselet, thus resulting in a heavy ‘composite’ armor, which was further reinforced by a padded armor worn under (or over) the corselet. This tremendously well-protected scope was complemented by other armor pieces, like vambraces, greaves, leather gauntlets and even mail hoods that were attached to the helmet.

Now in terms of military history, the Kataphraktoi or their brethren Klibanophoroi (a super heavy cavalry unit revived by Emperor Nikephoros II Phokas) certainly required costly equipment and armaments, which could have possibly limited these units only to the Tagmata army. It is also interesting to note that Emperor John I Tzimiskes raised another unit of heavily armored shock cavalry – known as the Athanatoi (or ‘Immortals’). According to contemporary sources, these cavalrymen were draped in exquisite armor, described as “armed horsemen adorned with gold”.

By the end of the 10th century, the manpower derived from most Themes in Anatolia began to dwindle; while by the end of the 11th century the quality of native Byzantine troops declined – so much so that their land-owning positions were gradually taken over by Armenians (and related Cappadocians), Varangians, Slavs and even Franks. Emperor Nikephoros II Phokas, who was also a brilliant military leader, perceived this ‘slackening’ trend, and already took steps that would allow the employment (and even recruitment) of mercenaries in the Themata army. In fact, according to credible estimates made by historians, by the end of the 10th century (and early 11th century), possibly more than half of the fighting men in the Byzantine army were mercenaries who came from different ethnic backgrounds.

Now if we proceed to a century later, Frankish sources talked about the variant mercenary elements found in Emperor Alexios I Komnenos’ army, including the Patzinaks, Alans, Kipchaks (Cumans), Bulgars – and these groups possibly formed the core of the missile cavalry. To that end, Nikephoros II’s light cavalry divisions were mostly composed of the Patzinaks (or Pechenegs), semi-nomadic Turkic people who originally hailed from Central Asia. These light cavalrymen were complemented by their ‘heavier’ brethren, along with the infantrymen and marines – derived from the Anglo-Saxons, Rus (early Varangians), Franks, Italians, Dacians, and even Normans. And quite intriguingly, this system of employing mercenaries even took an administrative route (possibly as an alternative to the depreciating Themata army) that streamlined the foreign troops into self-contained contingents known as the symmachoi (‘allies’) that were commanded by their own officers and leaders.

We discussed at length about the Varangian Guards, probably the most renowned of all Byzantine army units, in one of our articles dedicated to the mercenary regiment. Pertaining to the latter part, the Varangians Guards were indeed employed as mercenaries as opposed to guard units like the Scholai and Exkoubitores. Now employing mercenaries was a trademark of Byzantine military stratagem even in the earlier centuries (as we discussed in the last entry). But the recruitment of the Varangians (by Emperor Basil II in 988 AD) was certainly different in scope, simply because of the loyalty factor. In essence, the Varangians were specifically employed to be directly loyal to their paymaster – the Emperor. In that regard, unlike most other mercenaries, they were dedicated, incredibly well trained, furnished with the best of armors, and most importantly devoted to their lord. And unlike other imperial guard regiments, the Varangian Guard was (mostly) not subject to political and courtly intrigues; nor were they influenced by the provincial elites and the common citizens. Furthermore, given their direct command under the Emperor, the ‘mercenary’ Varangians actively took part in various encounters around the empire – thus making them an effective crack military unit, in contrast to just serving ceremonial offices of the royal guards.

In any case, the popular imagery of a Varangian guardsman generally reverts to a tall, heavily armored man bearing a huge ax rested on his shoulder. This imposing ax in question entailed the so-called Pelekys, a deadly two-handed weapon with a long shaft that was akin to the famed Danish ax. To that end, the Varangians were often referred to as the pelekyphoroi in medieval Greek. Now interestingly enough, while the earlier Pelekys tended to have crescent-shaped heads, the shape varied in later designs, thus alluding to the more ‘personalized’ styles preferred by the guard members. As for its size, the sturdy battle-ax often reached to an impressive length of 140 cm (55-inch) – with a heavy head of 18 cm (7-inch) length and blade-width of 17 cm (6.7-inch). And lastly, it should also be noted that the Varangians mostly played their crucial roles after the military peak of the Byzantine army (post 11th century) – an epoch that is not the focus of our article.