Our earliest notice of the Germans is found in the “Commentaries” by Julius Caesar, who twice invaded their country. About a century and a half later the Roman historian, Tacitus, wrote a little book called “Germany”, which gives an account of the people as they were before coming under the influence of Rome and Christianity. Tacitus describes the Germans as barbarians with many of the usual marks of barbarism. He speaks of their giant size, their fierce, blue eyes, and their blonde or ruddy hair. These physical traits made them seem especially terrible to the smaller and darker Romans. He mentions their love of warfare, the fury of their onset in battle, and the contempt which they had for wounds and even death itself. When not fighting, they passed much of their time in the chase, and still more time in sleep and gluttonous feasts. They were hard drinkers, too, and so passionately fond of gambling that, when a man’s wealth was gone, he would even stake his liberty on a single game. 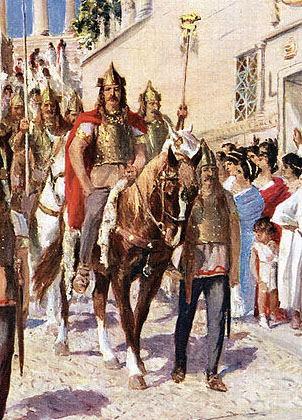 On the other hand, the Germans had certain attractive qualities not always found even among civilized peoples. They were hospitable to the stranger, they respected their sworn word, they loved liberty and hated restraint. Their chiefs, we are told, ruled rather by persuasion than by authority. Above all, the Germans had a pure family life. “Almost alone among barbarians,” writes Tacitus, “they are content with one wife. No one in Germany laughs at vice, nor is it the fashion to corrupt and be corrupted. Good habits are here more effectual than good laws elsewhere“.  The Germans, then, were strong and brave, hardy, chaste, and free.

Progress of the Germans

The Germans, during the three centuries between the time of Tacitus and the beginning of the invasions, had advanced somewhat in civilization. They were learning to live in towns instead of in rude villages, to read and write, to make better weapons and clothes, to use money, and to enjoy many Roman luxuries, such as wine, spices, and ornaments. They were likewise uniting in great confederations of tribes, ruled by kings who were able to lead them in migrations to other lands.

Reasons for the Germanic migrations

During this same period, also, the Germans increased rapidly in numbers. Consequently it was a difficult matter for them to live by hunting and fishing, or by such rude agriculture as their country allowed. They could find additional land only in the fertile and well cultivated territories of the Romans. It was this hunger for land, together with the love of fighting and the desire for booty and adventure, which led to their migrations.

The German inroads were neither sudden, nor unexpected, nor new. Since the days of Marius and of Julius Caesar not a century had passed without witnessing some dangerous movement of the northern barbarians. Until the close of the fourth century Rome had always held their swarming hordes at bay. Nor were the invasions which at length destroyed the empire much more formidable than those which had been repulsed many times before. Rome fell because she could no longer resist with her earlier power. If the barbarians were not growing stronger, the Romans themselves were steadily growing weaker. The form of the empire was still the same, but it had lost its vigor and its vitality.

North of the Danube lived, near the close of the fourth century, a German people called Visigoths, or West Goths. Their kinsmen, the Ostrogoths, or East Goths, held the land north of the Black Sea between the Danube and the Don. These two nations had been among the most dangerous enemies of Rome. In the third century they made so many expeditions against the eastern territories of the empire that Aurelian at last surrendered to the Visigoths the great province of Dacia. The barbarians now came in contact with Roman civilization and began to lead more settled lives. Some of them even accepted Christianity (*) from Bishop Ulfilas, who translated the Bible into the Gothic tongue.

The Visigoths cross the Danube, 376 A.D.

The peaceful fusion of Goth and Roman might have gone on indefinitely but for the sudden appearance in Europe of the Huns. They were a nomadic people from central Asia. Entering Europe north of the Caspian Sea, the Huns quickly subdued the Ostrogoths and compelled them to unite in an attack upon their German kinsmen. Then the entire nation of Visigoths crowded the banks of the Danube and begged the Roman authorities to allow them to cross that river and place its broad waters between them and their terrible foes. In an evil hour for Rome their prayer was granted. At length two hundred thousand Gothic warriors, with their wives and children, found a home on Roman soil.

The settlement of such a host of barbarians within the frontier of the empire was in itself a dangerous thing. The danger was increased by the ill treatment which the immigrants received. The Roman officials robbed them of their possessions, withheld the promised supplies of food, and even tried to murder their leaders at a banquet. Finally, the Germans broke out in open revolt. The emperor Valens misjudged their strength and rashly gave them battle near Adrianople in Thrace. The once invincible legions fell an easy prey to their foes, and the emperor himself perished.

Results of the battle

The defeat at Adrianople is considered one of the few really decisive battles in the world’s history. It showed the barbarians that they could face the Romans in open fight and beat them. And it broke, once for all, the Danube barrier. Swarms of fighting men, Ostrogoths as well as Visigoths, overran the provinces south of the Danube. The great ruler, Theodosius, saved the empire for a time by granting lands to the Germans and by enrolling them in the army under the high-sounding title of “allies.” Until his death the Goths remained quiet–but it was only the lull before the storm.

Theodosius, “the friend of the Goths,” died in 395 A.D., leaving the defense of the Roman world to his weakling sons, Arcadius and Honorius. In the same year the Visigoths raised one of their young nobles, named Alaric, upon a shield and with joyful shouts acclaimed him as their king. The Visigothic leader despised the service of Rome. His people, he thought, should be masters, not servants. Alaric determined to lead them into the very heart of the empire, where they might find fertile lands and settle once for all.

Alaric in Greece and Italy

Alaric at first fixed his attention on Constantinople. Realizing, at length, how hopeless would be the siege of that great city, he turned toward the west and descended upon Greece. The Germans marched unopposed through the pass of Thermopylae and devastated central Greece, as the Persians had done nearly nine centuries before. Then the barbarians entered the Peloponnesus, but were soon driven out by Stilicho, a German (**) chieftain who had risen to the command of the army of Honorius. Alaric gave up Greece only to invade Italy. Before long the Goths crossed the Julian Alps and entered the rich and defenseless valley of the Po. To meet the crisis the legions were hastily called in, even from the distant frontiers. Stilicho formed them into a powerful army, beat back the enemy, and captured the Visigothic camp, filled with the spoil of Greek cities. In the eyes of the Romans Stilicho seemed a second Marius, who had arisen in an hour of peril to save Italy from its barbarian foes.

The Visigoths before Rome

Alaric and his Goths had been repulsed; they had not been destroyed. Beyond the Alps they were regaining their shattered strength and biding their time. Their opportunity came soon enough, when Honorius caused Stilicho to be put to death on a charge of plotting to seize the throne. The accusation may have been true, but in killing Stilicho the emperor had cut off his right hand with his left. Now that Stilicho was out of the way, Alaric no longer feared to descend again on Italy. The Goths advanced rapidly southward past Ravenna, where Honorius had shut himself up in terror, and made straight for Rome. In 410 A.D., just eight hundred years after the sack of the city by the Gauls, Rome found the Germans within her gates.

The city for three days and nights was given up to pillage. Alaric, who was a Christian (*), ordered his followers to respect the churches and their property and to refrain from bloodshed. Though the city did not greatly suffer, the moral effect of the disaster was immense. Rome the eternal, the unconquerable, she who had taken captive all the world, was now herself a captive.

From Rome Alaric led his hosts, laden with plunder, into southern Italy. He may have intended to cross the Mediterranean and bring Africa under his rule. The plan was never carried out, for the youthful chieftain died suddenly, a victim to the Italian fever. After Alaric’s death, the barbarians made their way northward through Italy and settled in southern Gaul and Spain. In these lands they founded an independent Visigothic kingdom, the first to be created on Roman soil.

Romanization of the Visigoths

The possessions of the Visigoths in Gaul were seized by their neighbors, the Franks, in less than a century; but the Gothic kingdom in Spain had three hundred years of prosperous life. The barbarian rulers sought to preserve the institutions of Rome and to respect the rights of their Roman subjects. Conquerors and conquered gradually blended into one people.

(*) They were taught the Arian heresy