The German invasions of the fourth and fifth centuries were the principal cause of the differing fortunes of East and West, and the decisive factor was the geographical and strategic position of Constantinople, lying at the northern apex of the triangle which included the rich coast-line of the eastern Mediterranean.

The motive force which impelled the Germanic invaders across the frontiers of Rhine and Danube was the irresistible onrush of the Huns, moving westwards from central Asia along the great steppe-belt which ends in the Hungarian plains. This westward advance struck full at central Europe; but only a portion of the Byzantine territories was affected. Visigoths, Huns, and Ostrogoths successively ravaged the Balkans, dangerous but not fatal enemies, and passed on to dismember Rome’s provinces in the West. The weakness of Persia, likewise harassed by the Huns, and the timely concessions made to her by Theodosius I in the partition of Armenia (c. 384-7), preserved the Euphrates frontier intact, while the ascendancy of the barbarian magistri militum, commanders of the Germanized Roman armies, was twice broken at Constantinople, by the massacre of the Goths in 400, and again by the employment of Isaurian troops as a counter-force in 471. Very different was the fate of Rome. In 410 the city itself was held to ransom by the Visigoths, and during the course of the fifth century Britain, Gaul, Spain, and Africa slipped from the Empire’s weakening grasp. In 476 came the end of the series of puppet emperors, and the barbarian generals, who throughout this century had been the effective power, assumed the actual government of Italy.

In the economic sphere the contrast between East and West is yet more striking. Even under the earlier Empire, the preponderance of wealth and population had lain with the Eastern provinces. Banking and commerce were more highly developed in these regions, and through them passed the great trade-routes carrying the produce of Asia to the Western markets. The prosperous cities of Asia Minor, Syria, and Egypt were still, in the fifth century, almost undisturbed by the invader, and their contributions, in taxes or in kind, flowed in full volume to the harbours and Treasury of Byzantium. In western Europe the machinery of provincial government had broken down under the stress of anarchy and invasion. Revenues were falling off; longdistance trade was becoming impossible; the unity of the Mediterranean had been broken by the Vandal fleet, and even the traditional source of the corn-supply of the city of Rome was closed when the Vandals took possession of north-west Africa. With the establishment of the barbarian kingdoms, the organization of a civilized State disappears from the west of Europe. The centralized government of Byzantium could levy and pay its forces, educate its officials, delegate authority to its provincial governors, and raise revenue from the agricultural and trading population of its Empire. The German kings had only the plunder of conquered lands with which to reward their followers; standing armies were out of the question, and the complications of bureaucracy were beyond their ken, save where, as in the Italy of Theodoric, a compromise with Roman methods had been reached.

In 518 a Macedonian peasant, who had risen to the command of the palace guard, mounted the imperial throne as Justin I. His nephew and successor, Justinian the Great (527-65), dominates the history of sixth-century Byzantium. For the last time a purely Roman-minded Emperor, Latin in speech and thought, ruled on the Bosphorus. In him the theory of Roman sovereignty finds both its fullest expression and its most rigorous application. It involved, in his view, the reconquest of the territory of the old Roman Empire, and in particular of those Western provinces now occupied by German usurpers. It involved also the imperial duty of assuring the propagation and victory of the Orthodox faith and, as a corollary, the absolute control of the Emperor over Church affairs.

In pursuance of this policy Africa was retaken from the Vandals (534), Italy from the Ostrogoths (537). The south of Spain was restored to the Empire, and the whole Mediterranean was now open to Byzantine shipping. A vast system of fortifications was constructed on every frontier; the defensive garrisons were reorganized, and the provincial administration was tightened up. Public works and buildings of every description, impressive remains of which are still visible in three continents, owed their origin, and often their name, to the ambitious energy of Justinian.

The same principles inspired his two greatest creations, the codification of Roman law and the building of St. Sophia. Conscientious government required that the law, its instrument, should be so arranged and simplified as to function efficiently; and the immense expenditure incurred by the Western expeditions could be met only by the smoothest and most economical working of the fiscal machinery. Imperial prestige was no less involved in the magnificence of the Court and its surroundings; and the position of the Emperor, as representative of God upon earth, gave special emphasis to his responsibility for the erection of the foremost church in Christendom. The centralization of all the activities of the Empire -political, artistic, literary, social, and economic- in its capital city was now practically complete, and the first great period of Byzantine art is nobly exemplified in the Church of the Holy Wisdom.

The reverse of the medal, unhappily, stands out in higher relief when subsequent events are considered. The Western conquests, though striking, were incomplete, and ended by draining the resources of the Empire. Heavily increased taxation defeated the honest attempts of Justinian to remedy abuses in its collection, and alienated the populations of the newly regained provinces. The interests of East and West were now widely divergent, and to the Italian taxpayer the Byzantine official became a hateful incubus. Further, the main artery of communication between the Bosphorus and the Adriatic was threatened by the Slav incursions into the Balkan peninsula, which increased in frequency towards the end of the reign. 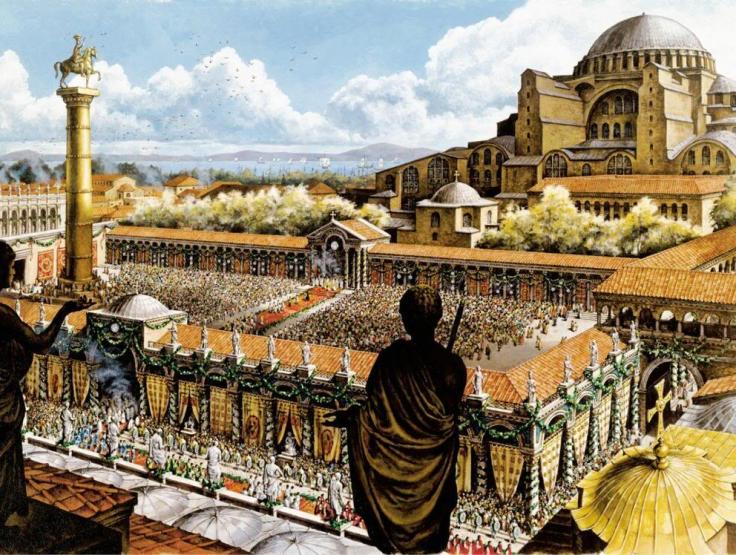 Even before his accession Justinian had departed from the conciliatory policy of Zeno and Anastasius with regard to the Monophysites, and with an eye to Western goodwill
had taken measures to close the schism between Rome and Constantinople caused by Zeno’s attempts to secure a working compromise in the dogmatic dispute. This, however, did not end all troubles with the Papacy, for Justinian’s ‘Caesaropapism’ demanded absolute submission of the pontiff to all pronouncements of the imperial will; and to enforce this, violent measures, moral and even physical, were required, as Pope Vigilius found to his cost. A more serious consequence was the persecution of Monophysites in Egypt and Syria. The influence of Theodora, the Empress, who possessed Monophysite sympathies and an understanding of the Eastern problem, prevented the policy from being consistently carried out; but enough was done to rouse the fury of the populace against the ‘Melchites’, or supporters of the Emperor, and the results of such disaffection were seen before long when Persian and Arab invaders entered these regions.

At the death of Justinian it became evident that the vital interests of Byzantium lay in the preservation of her northern and eastern frontiers, which guarded the capital and the essential provinces of Anatolia and Syria. The rest of the century was occupied by valiant and largely successful efforts to mitigate the consequences of Justinian’s one-sided policy. Aggression in the West had entailed passive defence elsewhere, supplemented by careful diplomacy and a network of small alliances. This had proved expensive in subsidies, and damaging to prestige, Justin II in 572 boldly refused tribute to Persia, and hostilities were resumed. The war was stubbornly pursued till in 591 the main objectives of Byzantium were reached. Persia, weakened by dynastic struggles, ceded her portion of Armenia and the strongholds of Dara and Martyropolis. The approaches to Asia Minor and Syria thus secured, Maurice (582-602) could turn his attention to the north. The Danube frontier -barely 200 miles from Constantinople- was crumbling under a new pressure. The Avars, following the traditional route of Asiatic nomad invaders, had crossed the south Russian steppes and established themselves, shortly after Justinian’s death, in the Hungarian plains. Dominating the neighbouring peoples, Slav and Germanic, they had exacted heavy tribute from Byzantium as the price of peace. Even this did not avert the fall of Sirmium (582), key-fortress of the Middle Danube, and the Adriatic coasts now lay open to barbarian attacks. After ten years of chequered warfare Maurice succeeded in stemming the flood, and in the autumn of 602 Byzantine forces were once more astride the Danube. Meanwhile the Lombards, ousted by Avar hordes from their settlements on the Theiss, had invaded Italy (568), and by 580 were in possession of more than half the peninsula. Byzantium, preoccupied with the East, could send no regular assistance, but efforts were made to create a Frankish alliance against the invaders, and with Maurice’s careful reorganization of the Italian garrisons a firm hold was maintained on the principal cities of the seaboard.

All such precarious gains won by the successors of Justinian were swept away by the revolution of 602, which heralded the approach of the darkest years that the Roman Empire had yet known. Angry at the prospect of wintering on the Danube, the troops revolted. Phocas, a brutal centurion, was elected Emperor, and Maurice and his family were put to the sword. A reign of terror ensued, which revealed the real weakness of the Empire. Internal anarchy and bankruptcy threatened the very existence of the central power, while Persian armies, in a series of raiding campaigns, captured Rome’s outlying provinces and ravaged even her vital Anatolian possessions. The ruinous heritage of Justinian was now made manifest, and the days of Byzantium were, it seemed, already numbered.