The army of Heraclius’ empire after demobilization in 629 and 630 was almost certainly smaller than that of Justinian’s reign, which the contemporary historian Agathias had speculated in estimating its strength at 150,000. The question is how much smaller were the total disposable Byzantine forces at the beginning of the 630s than they had been late in the reign of Justinian. Perhaps they were smaller by as much as one-third, although it is difficult to conceive how they could have been much less than two-thirds of the late Justinianic armies’ size, because of the remaining vast dimensions of the empire. 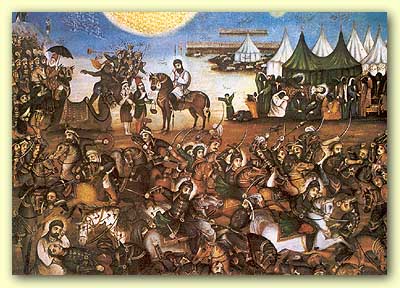 Heraclius’ armies on the eve of the Muslim conquests probably included approximately 10,000 to 20,000 elite mobile praesental expeditionary forces at and near Constantinople. Those troops were capable of fighting in pitched campaigns in the field. These were the best troops who could be sent against the Muslims, or against any other invader. Of varying but usually less reliable quality were other troops: 25,000 mostly mediocre soldiers in Egypt; 5-10,000 in Africa; 5-10,000 in what was left of Byzantine Italy; in the embattled Balkans under the magister militum per Thraciam a hypothetical 20,000, of whom probably an inadequate 8,000 to 10,000 or less were available for expeditionary campaigning elsewhere, 5,000 for fleet and island commands; under the magister militum per Armeniam hypothetically 12,000, but 5-8,000 or less could be spared from duties in Armenia and the rest of the Caucasus; under the critical magister militum per Orientem there were hypothetically 20,000, of whom 1,000 to 2,000 remained in Isauria and Cilicia for constabulary service, 8,000 in upper Mesopotamia, primarily facing the Persians but also to ward off any beduin incursions, 10,000 in Syria, especially northern Syria, of whom surely only 5,000 or less, including friendly but irregular Arab hired guards remained in the three Palestinian provinces and Arabia. The exact military command structure for these troops is unclear and any clarification depends on elucidating how long the system of late Roman magistri militum (Masters of the Soldiers) survived. It appears that magistri militum still existed on the eve of the Muslim conquests, and more specifically, that the magister militum per Orientem or Master of the Soldiers in the East was the military commander who still commanded the Byzantine troops in Syria and Mesopotamia. In addition to these regular troops, although some were essentially performing routine garrison duty, were friendly Arabs, whose numbers could easily match or double or triple, for a very short and specific campaign only, those of the regular Byzantine forces in Syria, Mesopotamia, and Palestine. These are only estimates, not secure figures.

The figures for non-Arab Byzantine soldiers in the Byzantine Empire in c. AD 630 would make a total of 113,000 to 130,000 troops at the higher end of a likely range of figures, or 98,000 or even less at the lower end. Fifty thousand or less of these might have been available for all forms of deployment against Arabs. Protection of logistical lines and garrison duties probably reduced the maximum potential strength of a regular force to 20,000 or 30,000, in addition to friendly Arab contingents. However, it is possible that the financial strains at the end of the Persian wars led to an even sharper reduction in the total number of effectives, but this is very conjectural. These troops varied greatly in quality. In any case, these totals were insufficient for internal security purposes and for proper defense of the empire’s borders after 630. But the logistical problems of supporting even these inadequate numbers of soldiers were formidable.

The relevance of these broader figures for defenses against potential Muslim invasion requires closer scrutiny. Probably only small postings of local regular units existed at scattered points in the three Palestinian provinces, Palestine I, Palestine II, Palestine III, and in Arabia. The largest posting probably was at Caesarea, with maybe 200 or 300 mobile troops available. Small garrisons, composed of Byzantine but in effect long assimilated indigenous troops, many of whom probably carried on some other occupation as well, existed probably of 100 or less to 200 soldiers, at sites on both sides of the Dead Sea and Jordan River valley. The quality of these troops was mediocre but not impossibly bad. Some of them drilled at least occasionally. It was difficult to coordinate these scattered garrisons if some serious external threat appeared. These garrison troops were inexperienced at fighting any open warfare of maneuver and pitched combat. They were best suited for passive, low-intensity stationary guard duty, or for defending well-fortified fixed positions. Individual towns may have held a garrison of the size of a numerus, whose numbers likely totalled 100 to 500 soldiers.

The largest garrisons were not in any of the three Palestinian provinces, but in northern Syria and upper Mesopotamia, facing greater traditional threats to security, namely, the Persians. A substantial garrison existed at and near Antioch, probably 1,500 or less, and a much smaller but important garrison at Chalkis (Qinnasrin) possibly a few hundred. Troops covering the Mesopotamian frontier with Persia may have fluctuated but after demobilization in 629, in peacetime, probably counted several thousand good troops, with additional thousands of troops, and perhaps one thousand or more, established at key points, including Melitene, along or near the Armenian frontier. The exact strength of these units is uncertain, but the government probably maintained some strength there to insure enforcement of the peace terms of the recent peace treaty with Persia and the agreement of Arabissos of 629. The threat might come not only from the Persian government, which was weakened by internal strife, but also from dissident Persian forces, irregulars and stragglers, and beduin. Even the Byzantine government’s fiscal pressures and the knowledge that Persia was no longer a major threat could not have allowed Heraclius to denude that region of all troops. But some were probably scattered at Callinicum, others at Nisibis and Dara and Edessa, Zeugma, Hierapolis, and Berrhoia. Modest-sized detachments of 100 or so may well have been the emplacements of regular soldiers, supplemented at some sites with encampments of friendly Christian (usually nominally Monophysitic) Arabs.

Local Arab garrisons probably equaled or exceeded the numbers of regular Byzantine soldiers. Likewise there appear to have been modest (hundred or more soldiers) detachments stationed at a few strategic points across the legal border inside Persia, at least at Hit and Takrlt, on the upper Euphrates and Tigris Rivers respectively. Defenses of areas east of the Jordan and east of the Golan Heights were another matter. The Byzantine army appears to have allowed local sheikhs of a friendly sort to handle security patrols and the guarding of passage through desert and semi-desert peripheral territories.

The mobile effectives among the theoretical 25,000 troops in Egypt were probably small in number, a few thousand, widely scattered and difficult to collect to send to Syria/Palestine, of poor quality, and normally needed for internal security needs in Egypt and Cyrenaica. Even less available were troops stationed west of Egypt, in Numidia, and the Exarchate of Africa, which was exposed to grievous Berber raids. Likewise, the Byzantine government was not defending its Balkan regions well against Avars and Slavs and could temporarily divert Thracian troops, under the command of the magister militum per Thraciam, from there to Syria or Egypt only at the risk of experiencing the devastation of those regions and their populations.

The best Byzantine troops, those who were stationed at Constantinople, were located more than 1,600 kilometers from the areas of earliest Muslim penetration. It was possible to shift them to Syria, but it was expensive and time-consuming, requiring several months at least to remove the bulk of them there. Most Byzantine troops who were already stationed in Syria were located in the north, about 800 to 1,200 kilometers away from areas of the earliest major clashes. Time, organization, money, logistical planning, and the risks of offending local population were involved in any shifts. Except for emergency short-term needs, troops other than cavalry could not move much more than 25 to 30 kilometers per day, and even that speed presented problems for transportation of some of their equipment and supplies. After such a lengthy and exhausting trip, moreover, the troops and their animals required some rest and adjustment before being truly ready for serious operations and combat. A basic reality was the government’s inability to concentrate all or even most of its potentially available troops for open campaigning or to raise expeditionary armies much larger than 20,000 soldiers, including foot and horse.

The recruitment of additional soldiers required time, money, much training, and could disrupt existing rural social and economic structures. It was easier to raise contingents from the ranks of friendly Arab tribes, who were located more conveniently and who knew the terrain and fighting techniques of the Muslim invaders at least to some extent, than to recruit troops of Greek and Latin stock. Friendly Arab forces may have numbered two to five times the size of the available regular and garrison troops of “Byzantine” (Greek, Armenian, or Latin) stock; by this time very few Germanic recruits were available. Armenians could be and were recruited, but it was hazardous to rely too heavily on them.