Around 7,600 years ago, the emergence of agricultural settlements in Southeastern Europe and subsequent progress of civilization suddenly came to a standstill. This was most likely caused by an abrupt sea level rise in the northern Aegean Sea. Researchers of the Senckenberg Biodiversity and Climate Research Centre, the Goethe University in Frankfurt and the University of Toronto have now detected evidence of this oceanographic event and an earlier sudden sea-level rise in the fossils of tiny calcifying marine algae preserved in seafloor sediments in the Aegean Sea.

The new evidence supports a conclusion of extensive flooding along the edges of the northeastern Mediterranean, coinciding with two standstills in the Neolithic revolution. The earlier change in sea-level approximately 8,400 years ago highlighted by the new salinity record coincides with archeological dates suggesting that settlement on low-lying areas had already been significantly impeded by rising sea levels and the subsequent climatic changes. The renewed rise in sea levels 800 years later likely further hampered the transition to agricultural communities. 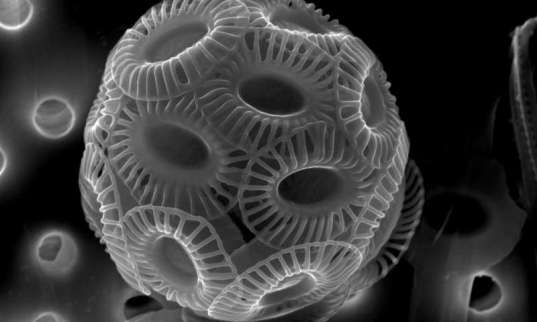 Abstract During the Holocene, North American ice sheet collapse and rapid sea-level rise reconnected the Black Sea with the global ocean. Rapid meltwater releases into the North Atlantic and associated climate change arguably slowed the pace of Neolithisation across southeastern Europe, originally hypothesized as a catastrophic flooding that fueled culturally-widespread deluge myths. However, we currently lack an independent record linking the timing of meltwater events, sea-level rise and environmental change with the timing of Neolithisation in southeastern Europe. Here, we present a sea surface salinity record from the Northern Aegean Sea indicative of two meltwater events at ~8.4 and ~7.6 kiloyears that can be directly linked to rapid declines in the establishment of Neolithic sites in southeast Europe. The meltwater events point to an increased outflow of low salinity water from the Black Sea driven by rapid sea level rise >1.4 m following freshwater outbursts from Lake Agassiz and the final decay of the Laurentide ice sheet. Our results shed new light on the link between catastrophic sea-level rise and the Neolithisation of southeastern Europe, and present a historical example of how coastal populations could have been impacted by future rapid sea-level rise.

The analysis of early Holocene episodes of rapid ice-sheet disintegration and meltwater release are highly relevant for our understanding of future sea-level change due to global warming and the associated societal effects on coastal populations. The final drainage of the glacial Lake Agassiz in North America at about 8.4 kiloyears (kyrs) cal BP triggered a rapid sea-level rise of >1.4 m within about 200 years. The freshwater outburst into the North Atlantic led to a reduced thermohaline circulation causing colder and drier climatic conditions over Europe, known as the 8.2 kyrs cal BP event. A similar massive meltwater event associated with a rapid sea-level rise, in the order of 4.5 m over the following <140 years in SW Sweden, has been reported at about 7.6 kyrs cal BP but did not result in any major climate changes over Europe.

The increased outflow of freshwater from the Black Sea interpreted from our new salinity record is interrupted from about 8.4 and 8.0 kyrs cal BP, as evidenced by an abrupt rebound of the SSS in our record. This SSS rebound corresponds to the regional expression of the cool and dry phase of the 8.2 kyrs cal BP event that was caused by a reduced thermohaline circulation well after the main Lake Agassiz’s freshwater outburst into the North Atlantic. The dry and cold climatic conditions presumably contributed to a drop in the Black Sea lake level, leading to a reduced outflow of low salinity water from the Black Sea into the Northern Aegean Sea.

The low SSS peaks in our record are a clear indication that the present-day density-driven, two-layer circulation of low salinity surface water outflow from the Black Sea into the Marmara Sea, and vice versa, high salinity inflow of marine water into the Black Sea, was fully established no younger than 8.4 kyrs cal BP. 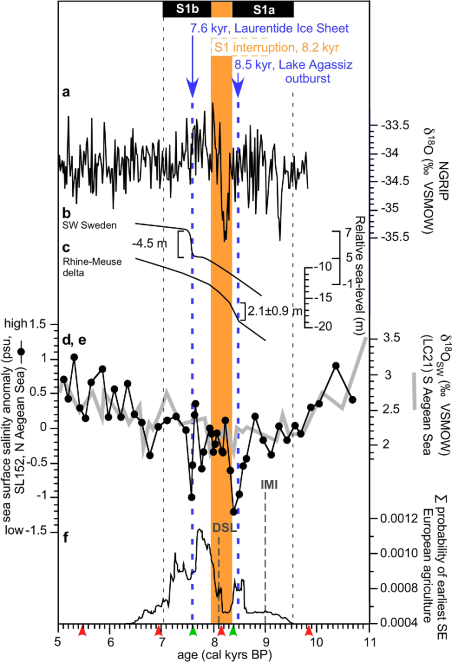 Our new data and the well constrained chronology of our core is crucial for reassessing the timing of early Holocene sea-level and climate change with the record of Neolithisation in southeastern Europe, which has been strongly debated over the last two decades. This debate is due, in part, to the uncertainties related to the reservoir effect on 14C ages from the Black Sea. The summed probability record of the earliest southeastern European agriculture, a commonly used method of demic migration of Neolithic settlements, shows four key features: a rapid decline of newly-established settlements at about 8.4 kyrs cal BP, followed by a low stasis until 8.2 kyrs cal BP, an increase in establishment from 8.2 to 7.7 kyrs cal BP, and a rapid decrease of settlement establishment at about 7.6 kyrs cal BP. The use of summed probability distributions of archaeological radiocarbon dates might have limitations and biases that may affect their comparison to paleoceanographic records and should therefore be used with caution. Nevertheless, the rapid decline and the low stasis of the summed probability distribution of refs between 8.4 and 8.2 kyrs cal BP has previously been interpreted as an absence of Neolithic site establishments and attributed directly to a rise of the Black Sea lake-level of about 130 m due to Lake Agassiz’s freshwater outburst at about 8.5 kyr cal BP, overtopping the Bosporus Sill and leading to catastrophic flooding of the Black Sea area. However, our data instead indicates that there was no catastrophic rise of the Black Sea lake level of about 130 m because the Black Sea lake level was already higher than the Bosporus sill depth as early as ~11.1–9.2 kyrs cal BP and well before Lake Agassiz’s freshwater outburst, as evidenced by sediments from the Marmara Sea, the Black Sea and the salinity decrease in our record around 8.8 kyrs cal BP.

Whilst the ~8.4 kyr cal BP event has been well-documented, the second interruption in Neolithic farming establishment at ~7.6 kyrs cal BP has been not reported by previous studies.

Our well-constrained chronology of rapid salinity changes in the Northern Aegean Sea might assist in unravelling the longstanding discussion of catastrophic sea-level changes impeding the Neolithisation of southeastern Europe.

Abstract Our knowledge of rate and processes in which semi-enclosed environments alternate from lacustrine to marine is commonly limited because of the paucity of specific proxies for sea level and salinity. Here we investigate the timing, rate, and key mechanisms involved in the transformation of the previously isolated Black Sea-Lake to the modern partly-enclosed marine sea using a suite of geophysical, geochemical, and geochronological methods.

Cores were collected in transects across shelves of Ukraine, Romania, Bulgaria, and Turkey. Biogenic carbonate from these cores was analyzed for radiocarbon and strontium, oxygen, and carbon isotopes. Strontium results indicate that the submergence of the Black Sea shelf at 9300 calendar years BP was caused by the ingress of Mediterranean water and was abrupt, taking < 40 years. The seismic reflection profiles show a uniform drape of subsequent sediment over aeolian dunes indicating a drowning with no time for erosion accompanying the submergence. Moisture measurements beneath the uniform drape indicate that the shelf was dry before submergence and the shoreline of the Preboreal lake may have regressed to beyond 120 mbsl. Mollusks colonized the newly submerged substrate of the inner shelf at the same time as they colonized the outer shelf. The succession of mollusk species with shells whose strontium isotope composition has a marine component indicates a rising salinity. The transformation of the lake to a sea is affirmed by increases in the shells’ strontium and oxygen isotopic ratios towards the external ocean value.

Radiocarbon years are calibrated to calendar years by tuning the oxygen and carbon isotope composition of the mollusk record to that of the U/Th dated Sofular Cave stalagmites. The match shows a reduction of the lake’s prior high reservoir age accompanying the inflow of the Mediterranean water. In 900 years the salinity reached a threshold that excluded all previous Black Sea lacustrine fauna. These results imply that any substantial postglacial submergence of the Black Sea shelves did not occur prior to entry of Mediterranean water.

2 thoughts on “A flood slowed the pace of Neolithisation across southeastern Europe?”