At Shubayqa 1, an archaeological site in northeastern Jordan, researchers have discovered the charred remains of a flatbread baked by hunter-gatherers 14,400 years ago. It is the oldest direct evidence of bread found to date, predating the advent of agriculture by at least 4,000 years. The findings suggest that bread production based on wild cereals may have encouraged hunter-gatherers to cultivate cereals, and thus contributed to the agricultural revolution in the Neolithic period. 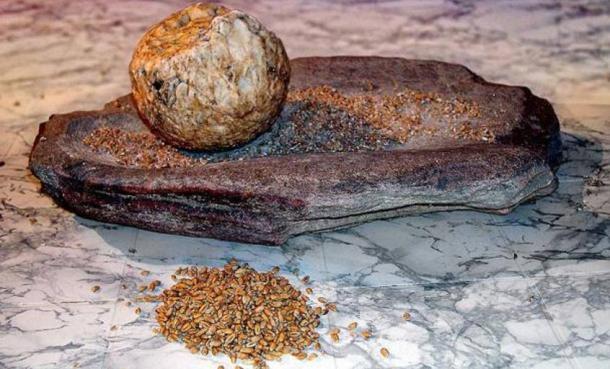 “The presence of hundreds of charred food remains in the fireplaces from Shubayqa 1 is an exceptional find, and it has given us the chance to characterize 14,000-year-old food practices. The 24 remains analysed in this study show that wild ancestors of domesticated cereals such as barley, einkorn, and oat had been ground, sieved and kneaded prior to cooking. The remains are very similar to unleavened flatbreads identified at several Neolithic and Roman sites in Europe and Turkey. So we now know that bread-like products were produced long before the development of farming. The next step is to evaluate if the production and consumption of bread influenced the emergence of plant cultivation and domestication at all,” said University of Copenhagen archaeobotanist Amaia Arranz Otaegui, who is the first author of the study.

“Bread involves labour intensive processing which includes dehusking, grinding of cereals and kneading and baking. That it was produced before farming methods suggests it was seen as special, and the desire to make more of this special food probably contributed to the decision to begin to cultivate cereals. All of this relies on new methodological developments that allow us to identify the remains of bread from very small charred fragments using high magnification,” said Professor Dorian Fuller (UCL Institute of Archaeology). 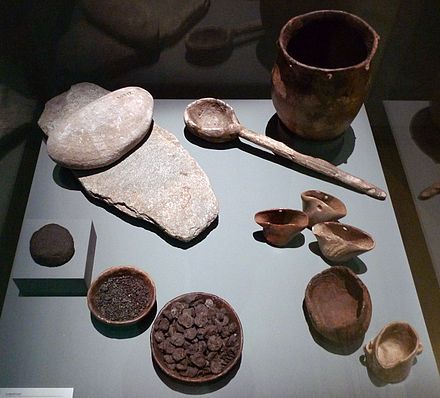 Abstract The origins of bread have long been associated with the emergence of agriculture and cereal domestication during the Neolithic in southwest Asia. In this study we analyze a total of 24 charred food remains from Shubayqa 1, a Natufian hunter-gatherer site located in northeastern Jordan and dated to 14.6–11.6 ka cal BP. Our finds provide empirical data to demonstrate that the preparation and consumption of bread-like products predated the emergence of agriculture by at least 4,000 years. The interdisciplinary analyses indicate the use of some of the “founder crops” of southwest Asian agriculture (e.g., Triticum boeoticum, wild einkorn) and root foods (e.g., Bolboschoenus glaucus, club-rush tubers) to produce flat bread-like products. The available archaeobotanical evidence for the Natufian period indicates that cereal exploitation was not common during this time, and it is most likely that cereal-based meals like bread become staples only when agriculture was firmly established.

Significance Despite being one of the most important foodstuffs consumed in the modern world, the origins of bread are still largely unknown. Here we report the earliest empirical evidence for the preparation of bread-like products by Natufian hunter-gatherers, 4,000 years before the emergence of the Neolithic agricultural way of life. The discovery of charred food remains has allowed for the reconstruction of the chaîne opératoire for the early production of bread-like products. Our results suggest the use of the wild ancestors of domesticated cereals (e.g. wild einkorn) and club-rush tubers to produce flat bread-like products. Cereal-based meals such as bread probably become staples when Neolithic farmers started to rely on the cultivation of domesticated cereal species for their subsistence. 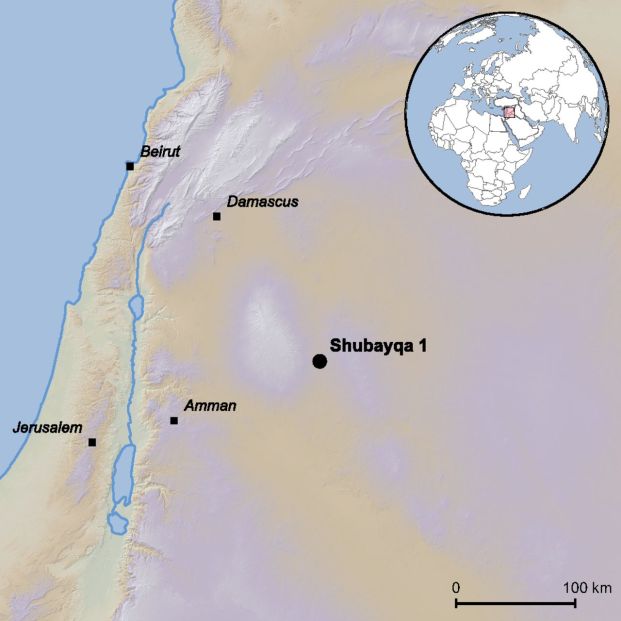 The origins of bread are still largely unknown. Early finds of bread in Neolithic sites in Europe and southwest Asia have inevitably related its invention to fully-fledged agricultural communities that exploited domesticated plant species [at least since circa (c.) 9.1 ka cal BP].

In southwest Asia (Near East), where the wild ancestors of domesticated crops such as wheat and barley occur naturally, hunter-gatherers of the Upper Paleolithic period (c. 23 ka cal BP) were already producing flour from wild grasses, and some authors claim that the invention of brewing, groats, porridge, and unleavened bread could have occurred as early as the late Epipaleolithic or Natufian period (14.6–11.7 ka cal BP). 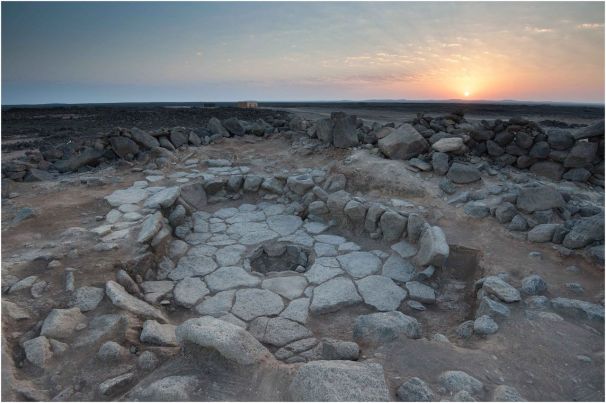 Shubayqa 1 is a hunter-gatherer site dated to the early and late Natufian (from 14.6 to 11.6 ka cal BP) located in northeast Jordan, in an area known as the Black Desert. Along with el-Wad Terrace, Shubayqa 1 represents one of the oldest Natufian sites so far discovered in southwest Asia. The site consists of two well-preserved superimposed buildings, the earlier one being Structure 1, which is a semisubterranean building with a carefully built flagstone pavement made of local basalt stones. This structure comprises exclusively Natufian deposits with a rich finds assemblage of chipped stones, ground stone tools, animal bones, and plant remains. Archaeobotanical investigations at Shubayqa 1 have thus far focused on the contents of two fireplaces built in sequential phases at the center of Structure 1.

The contents of the fireplace were left intact after its last use and were subsequently buried beneath a thick deposit that covered the building (approximately 0.5 m). In the next occupation phase of the site, the inhabitants built a new fireplace above the previous one in almost the same location, very similar in size and shape, using angular basal boulders. The contents of this fireplace were also left in situ after abandonment. Seven radiocarbon dates of short-lived charred plant remains from within the fireplaces indicate their use around 14.4–14.2 ka cal BP, which corresponds with the early Natufian period.

Systematic sampling and analyses of the full content of the fireplaces revealed an extraordinary archaeobotanical assemblage, with more than 65,000 well-preserved nonwoody plant macroremains belonging to at least 95 taxa.

Food remains are preserved in archaeological sites and provide empirical data on prehistoric plant-food selection, preparation, and consumption activities that would otherwise be very difficult to characterize. In this study we present the results of a total of 24 remains categorized as bread-like. The analyses carried out involved general description of the remains (i.e., size, texture, particles, and inclusions) using low-magnification microscopy, and their examination under scanning electronic microscopy (SEM) for the identification of plant particles (i.e., ingredients) and characterization of the matrix (number and types of voids). In addition to these, six specimens were subject to starch analyses.

The Identification of Prehistoric Bread At Shubayqa 1, a total of 24 food remains were categorized as bread-like products based on the estimation, quantification, measurement, and typological classification of plant particles and voids visible in the food matrix. From these, 22 were found in the oldest fireplace and 2 in the youngest. Macroscopically, all fragments showed a starchy, often vitrified, microstructure and irregular porous matrix, indicative of well-processed food components.

These results are in agreement with finds identified as “flat breads” from several Neolithic and Roman age sites in Europe and Turkey.

At least five of the bread-like remains showed the presence of noncereal components, including parenchyma cells, vascular tissue, and root-type starch.

Conclusions Previous studies have associated the production of bread with fully fledged agricultural groups of the Neolithic period. However, the discovery of charred food remains at Shubayqa 1 provides direct empirical data for the production of bread-like foodstuffs 4,000 y before agriculture emerged in southwest Asia. Our finds show the inhabitants exploited wild cereals, but also consumed root foods, plant resources whose economic value has largely been ignored due to their low archaeological visibility. Baking represents an important step forward in human subsistence and nutrition, and we here demonstrate that Natufian hunter-gatherers already practiced it. However, to explore when baking of foodstuffs such as bread developed the systematic analyses of charred food remains from contemporary, as well as previous Epipaleolithic hunter-gatherers sites should be carried out in the future.

Overall, our finds demonstrate that charred food remains are preserved in prehistoric sites in southwest Asia and their analysis provides firsthand and detailed information on the components of human diet and cooking technology very difficult to achieve by other means. The addition of these lines of evidence will enable a more critical and holistic evaluation of food consumption among hunter-gatherers and farmer-herders, providing unique insights to understand the transition from foraging to plant food production.