But Fortune, however, like a good umpire, unexpectedly shifted the scene and changed the nature of the contest, confining both in a narrower field, where the struggle grew even more desperate. The Romans, as I said, had garrisons at Eryx on the summit of the mountain and at the foot. Hamilcar now seized the town which lies between (244 B.C.) the summit and the spot at the foot where the garrison was. The consequence of this was that the Romans on the summit a thing they had never expected remained besieged and in considerable peril, and that the Carthaginians, though it is scarcely credible, maintained their position though the enemy were pressing on them from all sides and the conveyance of supplies was not easy, as they only held one place on the sea and one single road connecting with it. However, here again both sides employed every device and effort that the siege demanded: both endured every kind of privation and both essayed every means of attack and every variety of action. At length not, as Fabius Pictor says, owing to their exhaustion and sufferings, but like two uninjured and invincible champions, they left the contest drawn. For before either could get the better of the other, though the struggle in this place (243-248 B.C.) lasted for another two years, the war had been  decided by other means.

Such then was the condition of affairs at Eryx and as far as regarded the land forces.

So the Romans and Carthaginians, worn out by their exertions owing to the continual fighting, at length began to be despairing, their strength paralysed and their resources exhausted by protracted taxation and expense. But, in spite of all, the Romans, as if fighting for their lives, although they had for nearly five years utterly withdrawn from the sea owing to their disasters and their belief that they would be able to decide the war by the aid of their land forces alone, now, when they saw that chiefly owing to the bold action of the Carthaginian general they were not making the progress on which they had reckoned, decided for the third time to court the prospect of using sea-forces. They thought that this course, if they could but strike a deadly blow, was the only way of bringing the war to a favourable conclusion. And this they finally accomplished. It was yielding to the blows of Fortune that they had retired from the sea on the first occasion; the second time it was owing to their defeat at Drepana, but now they made this third attempt, and through it, by gaining a victory and cutting off the supplies from the sea of the Carthaginian army at Eryx, they put an end to the whole war. The attempt was indeed of the nature of a struggle for existence. For there were no funds in the public treasury for this purpose; but yet, owing to the patriotic and generous spirit of the leading citizens, enough was found to carry out the project; as either one, two, or three of them, according to their means, undertook to provide a quinquereme fully equipped on the understanding that they would be repaid if all went well. In this way a fleet of two hundred quinqueremes was rapidly got ready, all built on the model of the “Rhodian’s” ship. They then appointed Gaius Lutatius to the (242 B.C.) command and dispatched him at the beginning of summer. Suddenly appearing off the coast of Sicily, he seized on the harbour of Drepana and the roadsteads near Lilybaeum, the whole Carthaginian navy having retired to their own country. First of all he constructed works round the city of Drepana and made all preparations for its siege, but while continuing to prosecute this by every means in his power, he foresaw that the Carthaginian fleet would arrive, and was not forgetful of the original motive of the expedition, the belief that it was only by a sea battle that the war could be decisively finished. He did not, then, allow the time to pass uselessly and idly, but every day was spent in exercising and practising the crews properly for this purpose. He also paid unremitting attention to the matter of good food and drink, so that in a very short time he got his sailors into perfect condition for the anticipated battle.

When the unexpected news reached Carthage that the Romans were at sea with a fleet and were again disputing the naval supremacy, they at once got their ships ready, and filling them with corn and other provisions, dispatched their fleet on its errand, desiring that the troops at Eryx should be in no need (241 B.C.) of necessary supplies. Hanno, whom they had appointed to command the naval force, set sail and reached the so-called Holy Isle from whence he designed to cross as soon as possible to Eryx, unobserved by the enemy, and, after lightening the ships by disembarking the supplies, to take on board as marines the best qualified mercenaries together with Barcas himself and then engage the enemy. Lutatius, learning of Hanno’s arrival and divining his intentions, took on board a picked force from the army and sailed to the island of Aegusa which lies off Lilybaeum. There, after exhorting his troops as became the occasion, he informed the captains that the battle would take place next day. In the early morning, just as day was breaking, he saw that a brisk breeze was coming down favourable to the enemy, but that it had become difficult for himself to sail up against the wind, the sea too being heavy and rough. At first he hesitated much what to do under the circumstances, but reflected that if he risked an attack now that the weather was stormy, he would be fighting against Hanno and the naval forces alone and also against heavily laden ships, whereas if he waited for calm weather and by his delay allowed the enemy to cross and join the army, he would have to face ships now lightened and manageable as well as the pick of the land forces and above all the bravery of Hamilcar which was what they dreaded most at that time. He therefore decided not to let the present opportunity slip. When he saw the Carthaginian ships under full sail he at once got under weigh. As his crews easily mastered the waves owing to their good training, he soon brought his fleet into a single line with their prows to the enemy. 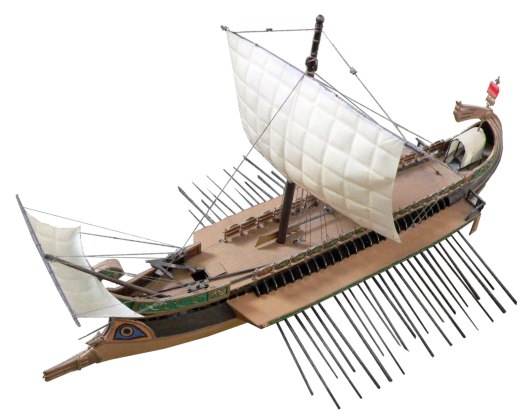 The Carthaginians, seeing that the Romans were intercepting their crossing, lowered their masts and cheering each other on in each ship closed with the enemy. As the outfit of each force was just the reverse of what it had been at the battle of Drepana, the result also was naturally the reverse for each. The Romans had reformed their system of shipbuilding and had also put ashore all heavy material except what was required for the battle; their crews rendered excellent service, as their training had got them well together, and the marines they had were men selected from the army for their steadfastness. With the Carthaginians it was just the opposite. Their ships, being loaded, were not in a serviceable condition for battle, while the crews were quite untrained, and had been put on board for the emergency, and their marines were recent levies whose first experience of the least hardship and danger this was. The fact is that, owing to their never having expected the Romans to dispute the sea with them again, they had, in contempt for them, neglected their naval force. So that immediately on engaging they had the worst in manyparts of the battle and were soon routed, fifty ships being sunk and seventy captured with their crews. The remainder raising their masts and finding a fair wind got back to Holy Isle, very fortunate in the wind having unexpectedly gone round and helping them just when they required it. As for the Roman Consul he sailed away to Lilybaeum and the legions, and there occupied himself with the disposal of the captured ships and men, a business of some magnitude, as the prisoners made in the battle numbered very nearly ten thousand.

Even on hearing of this unexpected defeat the Carthaginians, had they let themselves be guided by passion and ambition, would readily have continued the war, but when it came to a matter of cool calculation they were quite at a loss. For one thing they were no longer able to send supplies to their forces in Sicily as the enemy commanded the sea, and if they abandoned and in a manner betrayed them, they had neither other men nor other leaders with whom to pursue the war. They therefore at once sent a message to Barcas giving him full powers to deal with the situation. Hamilcar acted thoroughly like the good and prudent leader he was. As long as there had been some reasonable hope in the situation he had left no means, however perilous and venturesome it seemed, unemployed, and if there ever was a general who put to proof in a war every chance of success, it was he. But now that fortunes were reversed and there was no reasonable prospect left of saving the troops under his command, he showed his practical good sense in yielding to circumstance and sending an embassy to treat for peace. For our opinion should be that a general ought to be qualified to discern both when he is victorious and when he is beaten. Lutatius readily consented to negotiate, conscious as he was that the Romans were by this time worn out and enfeebled by the war, and he succeeded in putting an end to the contest by a treaty more or less as follows.

But when these terms were referred to Rome, the people did not accept the treaty, but sent ten commissioners to examine the matter. On their arrival they made no substantial changes in the terms, but only slight modifications rendering them more severe for Carthage: for they reduced the term of payment by one half, added a thousand talents to the indemnity, and demanded the evacuation by the Carthaginians of all islands lying between Sicily and Italy.

Such then was the end of the war between the Romans and Carthaginians for the possession of Sicily, and such were the terms of peace. It had lasted without a break for twenty-four years and is the longest, most unintermittent, and greatest war we know of. Apart from all the other battles and armaments, the total naval forces engaged were, as I mentioned above, on one occasion more than five hundred quinqueremes and on a subsequent one very nearly seven hundred. Moreover the Romans lost in this war about seven hundred quinqueremes, inclusive of those that perished in the shipwrecks, and the Carthaginians about five hundred. So that those who marvel at the great sea-battles and great fleets of an Antigonus, a Ptolemy, or a Demetrius would, if I mistake not, on inquiring into the history of this war, be much astonished at the huge scale of the operations. Again, if we take into consideration the difference between quinqueremes and the triremes in which the Persians fought against the Greeks and the Athenians and Lacedaemonians against each other, we shall find that no forces of such magnitude ever met at sea. This confirms the assertion I ventured to make at the outset that the progress of the Romans was not due to chance and was not involuntary, as some among the Greeks choose to think, but that by schooling themselves in such vast and perilous enterprises it was perfectly natural that they not only gained the courage to aim at universal dominion, but executed their purpose.