The events of the fifth century were decisive for the future of Europe. The general results of these events was the occupation of the western half of the Roman Empire, from Britain to North Africa, by German peoples. Now the Germans who effected this occupation were not, with one or two exceptions, the Germans who had been known to Rome in the days of Caesar and Tacitus. They were not West Germans. They were East Germans. The principal of the East German peoples were the Goths, the Vandals, the Gepids, the Burgundians, and the Lombards. There were also the Rugians, the Heruls, the Bastarnae, the Sciri.

Most of these peoples believed that they have reached the coast of East Germany from Scandinavia, and this tradition is confirmed by the evidence of names. The best students of German antiquity identify the name of the Goths with that of the Scandinavian Gauts. The Rugians who settled in Pomerania are explained by Rogaland in Norway. The Swedish Bornholm is supposed to be Burgundarholm, the holm of the Burgundians. Of these East German peoples, most were moving slowly through Europe in a generally southward direction, to the Black Sea and the Danube, in the third and fourth centuries. These East German barbarians were still in the stage in which steady habits of work seem repulsive and dishonourable. They thought that laziness consisted not in shirking honest labour but, to quote words of Tacitus, in “acquiring by the sweat of your brow that which might be procured by the shedding of blood“. Though the process is not revealed in our historical records, it seems very probable that the defensive wars in which the Emperor Marcus Aurelius, in the third quarter of the second century, was engaged against the Germans north of the Danube frontier- that these wars were occasioned by the pressure of East Germans beyond the Elbe driven by the needs of a growing population to encroach upon their neighbours.

The earliest great recorded migration of an East German people was that of the Goths, about the end of the second century. They moved from their homes on the lower Vistula to the shores of the Black Sea, where we find them in A.D. 214 in the reign of Caracalla.

Before this migration the Goths had formed one people, consisting like all German peoples, of a number of separate units or gaus. I do not think there can be much doubt that it was after their settlement there that they broke up into two great divisions, the Ostrogoths and the Visigoths, and that the motive of the division was geographical. It is easy to imagine how this could have happened, as there can be little doubt that they did not migrate all at once but rather in successive bands. The earlier comers, we might suppose, settled nearer the Danubian lands, in the neighbourhood of the Dniester, and they, in consequence of years of separation, felt themselves in a certain measure distinct when the later comers arrived; and the result was the formation of two groups, distinguished as East and West.

After the whole Gothic nation had been reunited on the shores of the Euxine, the ancient Greek cities of Olbia and Tyras seem to have soon fallen into their hands. We may infer this from the fact that the coinage of those cities comes to an end in the reign of Alexander Severus, who died in A.D. 235. Soon afterwards the Gothic attacks upon the Roman Empire begun.

The Gothic Attack in the third century A.D.

The recorded attacks of the Goths on the Roman Empire begun about A.D. 247. The success of these attacks was due to

1. the internal weakness of the Empire at the time; for it had sufferred from a succession of incompetent rulers since the death of Septimius Severus in A.D. 211, and

2. the simultaneous rise of the new Persian Empire, which had given it a very formidable enemy in the east.

The Goths now inflicted upon Rome the most grievous and shameful blow that had been struck by northern barbarians since the reign of Augustus when Arminius annihilated the legions of Varus in the forest of Teutoburg. They drew the army of the Emperor Decius into a swamp near the mouths of the Danube, destroyed the army, and slew the Emperor, A.D. 251. Soon afterwards they took to the sea, and sailing forth from the ports of south Russia they became the terror of the cities of the Black Sea, the Marmora, and the Aegean. These ravages did not cease till they attempted a great joint invasion by sea and land, which was decisevely repelled by the Emperor Claudius I (A.D. 269).

The achievement of Claudius -who is generally known, in consequence, as Claudius Gothicus- secured peace from the Goths for a long time in the regions south of the Danube; but it would not have done so if he had not been followed by a series of able rulers.

The Visigothic occupation of Dacia

But meanwhile the Goths were securing a success of a more abiding and important nature than their sensational victory in which a Roman Emperor had perished. They had in fact begun the actual dismemberment of the Empire by penetrating and ultimately occupying one of its provinces -the province of Dacia, north of the Danube, which had been conquered nearly a hundred and fifty years before by the Emperor Trajan. It was the last European province to be acquired by Rome; it was the first to fall away. No Roman coins, no Roman inscription of date later than about A.D. 256 have been found in Dacia. The Emperor Aurelian, who succeeded Claudius Gothicus in A.D. 270, withdrew the Roman officials and military garrisons from Dacia, and made the Danube once more the frontier of the Empire. Evidently the Goths had been gradually and steadily encroaching on Roman territory for fifteen or twenty years, and Aurelian simply decided to abandon a province which was already virtually lost. No doubt there was a considerable exodus of the provincials when the imperial government withdrew its protection; but we have no trustworthy evidence as to what exactly happened.

The Roman period of the history of Dacia or Transilvania comes to an end about A.D. 270 (having lasted for 150 years) and then the Gothic period begins.

Incursions of the Goths continued during the following sixty years. After the Emperor Constantine the Great became sole Emperor in A.D. 324, he gave his attention to the danger, and endeavoured to secure the lower Danube frontier by fortified camps and castles. He built a wall in the north-east corner of Thrace across the region which is now known as the Dobrudzha. Towards the end of his reign Constantine concluded a forced treaty with the Visigoths. They became federates of the Empire; that is, they undertook to protect the frontier and to supply a certain contingent of soldiers to the imperial army in case of wars. In return for this they received subsidies which, theoretically a supply of corn, was actually paid in money, and was technically called annonae foederaticae (federal corn supplies). Federal relations of this kind are a standing feature of the whole period during which the German people were encroaching upon the provinces of the Empire from the fourth to the sixth century. They were nearly all federates of the Empire, for a longer or shorter time, before they were independent masters of the lands which they have seized. Through this treaty Dacia, occupied by the Visigoths, became nominally a dependency of the Empire, and Constantine might boast that he had in a sense recovered Dacia. The peace lasted for a generation, and during this time the Visigoths, unable to press from the southward or westward, took to more settled habits and began to learn the arts of agriculture.

The territory of the Goths as a whole, including Visigoths and Ostrogoths, now, towards the middle of the fourth century, extended from the river Theiss or somewhere near it on the west to the river Dnieper on the east. The Visigoths held Dacia, and also parts of what are now Moldavia and Walachia; the Ostrogoths lived in the steppes beyond the Dniester, but we do not know the exact line of division between the two branches of the Gothic race.

These two peoples remained independent of each other. Our sources give us abundant proof that throughout the period up to the end of the fourth century the Visigoths had no king; their constitution was republican. The gaus acted in common, and some of the gau chiefs had a predominant influence in guiding the council of the nation and were recognised as natural leaders in the case of war; but we must not be misled by the occasional use of the term rex, instead of the more usual and proper judex, in Roman writers, into supposing that there was a king. Prominent leaders like Athanaric and Fritigern meet us, but they are only judices, gau chiefs; they are not kings.

On the other hand, royalty was adopted or maintained by the Ostrogoths. We meet an Ostrogothic king before the end of the third century, and in the fourth there arose the prominent figure of Hermanric.

After this peace in the reign of Constantine there is a pause for a generation in the hostilities between the Empire and the East Germans. For about fifty years the Germanic wars of Rome are almost wholly with the West Germans -the Franks and the Alamanni- who give a great deal of trouble on the Rhine frontier. The really grave dangers for Rome in the east will begin in A.D. 378; after which the Emperors will begin to realise how formidable the German peril is.

(Source: “The Invasion of Europe By the Barbarians”, by Bury, J.B.) 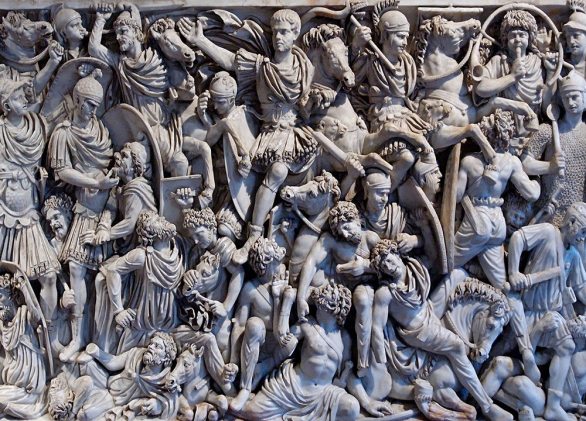