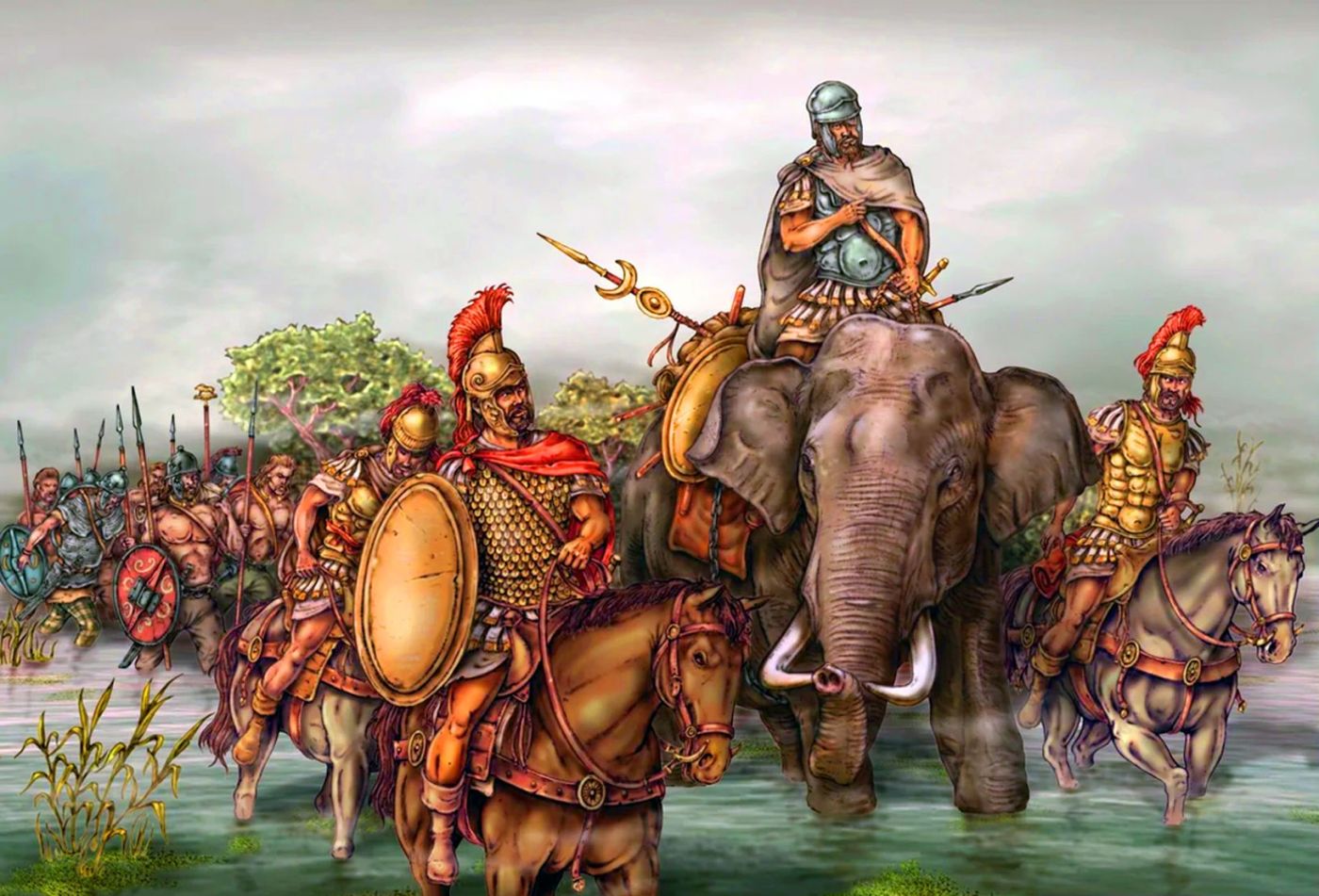 Publius bound for Iberia with sixty ships and Tiberius Sempronius for Africa with a hundred and sixty quinqueremes. With these he threatened such a redoubtable expedition and made such vast preparations at Lilybaeum, collecting all kinds of forces from everywhere, that it seemed as if he expected to sail up to Carthage and at once lay siege to it.

Publius, coasting along Liguria, reached the neighbourhood of Marseilles from Pisa in five days, and coming to anchor off the first mouth of the Rhone, known as the Massaliotic mouth, disembarked his forces there, having heard that Hannibal was already crossing the Pyrenees, but convinced that he was still at a distance of many days’ march owing to the difficulty of the country and the numbers of Celtic tribes between them Hannibal, however, who had bribed some of the Celts and forced others to give him passage, unexpectedly appeared with his army at the crossing of the Rhone, having marched with the Sardinian Sea on his right. Publius, when the arrival of the enemy was reported to him, being partly incredulous owing to the rapidity of their advance and partly desirous of ascertaining the exact truth while he himself was refreshing his troops after their voyage and consulting with his Tribunes in what place it would be wisest to offer battle to the enemy sent out three hundred of his bravest cavalry, giving them as guides and supports certain Celts who were in the service of the Massaliots as mercenaries.

Hannibal, on reaching the neighbourhood of the river, at once set about attempting to cross it where the stream is single at a distance of about four days’ march from the sea. Doing his best to make friends with the inhabitants of the bank, he bought up all their canoes and boats, amounting to a considerable number, since many of the people on the banks of the Rhone engage in maritime traffic. He also got from them the logs suitable for making the canoes, so that in two days he had an innumerable quantity of ferry-boats, every one doing his best to dispense with any assistance and relying on himself for his chance of getting across. In the meantime a large force of barbarians had gathered on the opposite bank to prevent the Carthaginians from crossing. Hannibal observing this and concluding that as things stood it was neither possible to force a crossing in face of such a strong hostile force nor to put it off, lest he should find himself attacked on all sides, sent off on the third night after his arrival a portion of his army, giving them native guides and placing them under the command of Hanno, the son of Bomilcar the Suffete.

Advancing up the bank of the river for two hundred stades they reached a place at which the stream divides, forming an island, and here they stopped. Using the timber they found ready to hand and either nailing or lashing logs together they soon constructed a number of rafts sufficient for their present need, and on these they crossed in safety, meeting with no opposition. Occupying a post of some natural strength they remained there for that day to rest after their exertions and at the same time to prepare for the movement which they had been ordered to execute. Hannibal, moreover, with the part of the army that remained behind with him, was similarly occupied. The question that caused him the greatest embarrassment was how to get the elephants, thirty-seven in number, across.

On the fifth night, however, the force which had already crossed began a little before dawn to advance along the opposite bank against the barbarians there, while Hannibal had got his soldiers ready and was waiting till the time for crossing came. He had filled the boats with his light horse and the canoes with his lightest infantry. The large boats were placed highest up stream and the lighter ferry-boats farther down, so that the heavier vessels receiving the chief force of the current the canoes should be less exposed to risk in crossing. They hit on the plan of towing the horses astern of the boats swimming, one man at each side of the stern guiding three or four horses by their leading reins, so that a considerable number were got across at once in the first batch. The barbarians seeing the enemy’s project poured out of their camp, scattered and in no order, feeling sure that they would easily prevent the Carthaginians from landing. Hannibal, as soon as he saw that the force he had previously sent across was near at hand on the opposite bank, they having announced their approach by a smoke-signal as arranged, ordered all in charge of the ferry-boats to embark and push up against the current. He was at once obeyed, and now with the men in the boats shouting as they vied with one another in their efforts and struggled to stem the current, with the two armies standing on either bank at the very brink of the river, the Carthaginians following the progress of the boats with loud cheers and sharing in the fearful suspense, and the barbarians yelling their war-cry and challenging to combat, the scene was in the highest degree striking and thrilling. At this moment, the barbarians having deserted their tents, the Carthaginians on the far bank attacked suddenly and unexpectedly, and while some of them set fire to the enemy’s encampment, the larger portion fell upon the defenders of the passage. The barbarians, taken quite by surprise, rushed some of them to save their tents, while others defended themselves against their assailants. Hannibal, all falling out favourably as he had purposed, at once marshalled those of his men who were the first to land, and after addressing some Avords of exhortation to them, led them to meet the barbarians, upon which the Celts, owing to their disordered condition and to their being taken by surprise, soon turned and turned to flight.

The Carthaginian general, having thus made himself master of the passage and defeated the enemy, at once occupied himself in fetching over the men who had been left on the other bank, and having in a very short time brought his whole army across encamped for that night beside the river.