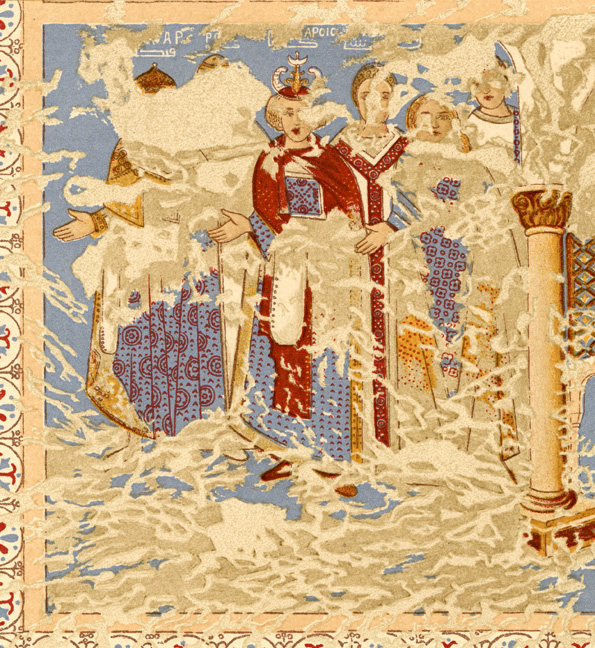 The evidence upon which a study of military service in Visigothic Spain must be based comes primarily from legal documents: the law-codes issued by the Visigothic kings and the acts of the regular church councils held at Toledo. In addition, we also have one of the most detailed, if highly rhetorical, accounts of an early medieval campaign, that contained in Julian of Toledo’s History of King Wamba. Study of these documents reveals some highly distinctive features of the army of the seventh-century Spanish kings, but it also reveals features and concerns which parallel those of the armies and kings of Merovingian Francia and Anglo-Saxon England. The provinces of the Spanish kingdom continued to be used as military districts, with provincial armies commanded by a dux exercitus provinciae (‘duke of the army of the province’). As in the sixth century, the army itself was divided into apparently decimally organised sub-units led by tiuphadi (apparently the equivalent of a millenarius: ‘commander of a thousand’), quingentenarii (commanders of 500), centuriones and decuriones. The army was raised by written summons sent out down the chain of royal officers. Interestingly, in his Rule for Monks, Isidore of Seville says that those entering a monastery should be entered into the ‘tables’ just as military recruits are. This is an intriguing reference and, unless a conscious classicism by Isidore, it would suggest that lists were kept of those who did military service. The existence of such lists is clearly implied by other sources in the post-Roman world, just as there were still tax-lists. This reference makes that clear. The late seventh-century Life of Fructuosus of Braga refers to lands being used as stipends for warriors, which may hint at a process whereby the army came to be made up of landholders, similar to that in Francia at the same time. On the frontiers royal officials obviously had the authority to call out their armies for local defence.

It has been suggested on the basis of a sixth-century ‘commissariat law’ that there was a small standing army in Visigothic Spain, based in cities and forts (castella). However, the law itself does not provide much support for this interpretation. It discusses the stockpiling of provisions (annonae) for the army by city and castellum but it does not specify that the troops so fed are permanent garrisons. It seems more likely that the law concerns the supply of the army in general, as it passed through, or was stationed in, the territories of those settlements. That there were permanent cadres of troops available in the royal bodyguard, and those of royal officers, is undoubtedly the case, but it is slightly misleading to describe such as a standing army.

By the later seventh century it would appear that all landowners and royal slaves were liable for military service. Wamba and his successor Ervig both issued laws about military service. That promulgated by King Ervig states that all men, ‘whether general, count or gardingus, Goth or Roman, freeman or manumitted slave, or any fiscal slave’, had to attend the summons. On the face of it, this would seem to mean that military obligation was universal, and sometimes this has been held to be the case. On reflection, however, this would seem to be unlikely. We might read it as operating down a chain of lordship and clientship. The provision of Ervig’s law, that all such men bring one in ten of their slaves, makes it clear that we are talking about a stratum of reasonably significant landowners. Ervig’s law was issued at a time of uncertainty in royal succession and this may very well have produced an increased concern to define and enforce the king’s claims on military manpower.

That we should see this law in terms of aristocrats and their retinues is strengthened by a consideration of the broader context. Visigothic law was very much concerned with ties of lordship and patronage. Legislation repeatedly tried to deal with violence committed by lords’ followings, and with the abuse of patronage to protect clients from the workings of the law. Furthermore, from at least the later sixth century, the law had tried to regulate how an aristocrat’s bucellarii were remunerated; this concern appears to have been stepped up in the later seventh century; as in Francia and England only a few years later, there was a concern to define what exactly a lord could expect from his followers, and what of their property was his if they changed patron. It seems that Ervig expected all landlords to perform military service, and to bring all those who were dependent upon them.

Possibly the most interesting aspect of Ervig’s military law is the specification that all those who were summoned to the army bring one tenth of their slaves (if they failed to do so, the crown would take those left behind!), and that these slaves be equipped with at least some body armour, shields, swords, spears, bows and arrows and slings. This use of slaves as soldiers is very interesting but seems to be peculiarly Spanish, perhaps going back to King Theudis’ recruiting of a slave army, allegedly 2,000 strong. There are no references to slave soldiers from anywhere else in post-Roman Europe, and even mentions of the semi-free and poor free with the army seem on balance to refer to the servants of warriors, or to a supply role rather than a military one. The reasons for the Visigoths’ use of slaves may relate to a shortage of manpower for the royal armies. A slightly later law of Egica called up all slaves who had been freed by royal intervention, on pain of their return to servile status.

The case of Visigothic Spain reveals certain similarities with areas north of the Pyrenees in that the army had become one based upon aristocratic retinues. In the Spanish case this takes on particular importance because of the debate on the nature of the later Visigothic kingdom. Some have argued that the kingdom had entered a destructive spiral of civil war, usurpation and repression. Others have countered that the Visigothic state, on the contrary, was strong and centralised. In the mid-sixth century and again in the first half of the seventh, dynastic instability in Spain was legendary, even amongst contemporaries, as kings were repeatedly faced with revolts by their more powerful magnates. In the central decades of the seventh century Chindasvinth and his son Reccesvinth seem to have maintained a strong hold on the throne, but nevertheless had to deal with repeated rebellions. Reccesvinth’s successor Wamba was faced with a rebellion in Septimania, which he soon quelled, but it is noteworthy that his legislation followed this war, and equally significant that, unlike Chindasvinth, Wamba did not feel able or willing to punish his opponents too severely, commuting the death sentence to decalvation. There are further hints of instability at the end of the period, just before the Arab conquest but it is nevertheless possible that the instability of the late Visigothic state might have been overplayed.

On the other hand, it seems that significant efforts were made to unify the kingdom ideologically. A fixed capital was established at Toledo, and royal regalia developed from the late sixth century. Periodic councils of the Spanish church were also convened.  Archaeologically, the study of artefacts shows the introduction of new, Byzantine styles replacing earlier Gothic forms in the seventh century, again perhaps to underpin Spanish unity. Analysis of funerary customs might also question the real strength of the local and regional aristocrats. Even if one follows the ‘downward spiral’ view of the Visigothic kingdom, the situation would still have the positive results, firstly, that the current king was almost always, ipso facto, the most powerful warrior in the land, and, secondly, that kings and rebels fought for control of the whole kingdom,
thus preserving the importance and unity of the Iberian state. The period did see attempts to enforce increasingly repressive legislation against Jews and slaves, which might be viewed as reflecting insecurity, and late Visigothic military legislation might be seen in this context.

It seems that the Visigothic kings failed to create the independent coercive force to penetrate local society from above and create a situation where local social pre-eminence was dependent upon royal favour. The late seventh-century laws calling up royal slaves and freedmen may be an attempt to create such an army, but it was not to succeed. Instead kings, and successful usurpers, relied upon their factions to maintain them in power. The penalties for failed usurpation were severe; the rewards for success were equally huge: a king could deploy all of his kingdom’s resources, in patronage and lands, especially those confiscated from enemies, to pay his followers. Dynastic insecurity led to repeated strengthening of the ideological and theological underpinnings of the royal office, and concomitantly to a hiking up of the penalties for threatening the king’s person. At the same time, support for a deposed king could be equally fatal; Fredegar describes the veritable blood-bath which followed Chindasvinth’s seizure of the throne in 642. Consequently, it is difficult to avoid the conclusion that, in Visigothic internal politics, the stakes seem to have spiralled. Whether such a spiral was inevitable or irreversible is, of course, a separate matter.

It has long been pointed out that after the final unification of the Iberian peninsula in 624 the Spanish kings could neither reward their followers with conquered loot and land nor carry out the functions of the war-leader king in the old way. It can be argued that Visigothic politics began to look inwards and armies had to be raised for defence against Basque attacks, or for the quelling of aristocratic unrest. In this situation the relationship between a king and his magnates, and the difficulties of raising a royal coercive force, were highlighted. These, and the inexperience of Visigothic armies, probably go a long way towards explaining the rapid collapse of the kingdom when faced in 711 by the battle-hardened armies of the Arab caliphate and its Berber subjects. On the other hand, Basque wars were frequent but are not well documented, and Wamba marked his accession with a campaign in the Pyrenees. Arab sources suggest that the last Visigothic king of Spain, Roderic, did this too after he seized the throne. Other kings may well have done the same, assembling the army and demonstrating their military abilities. Nevertheless, harrying warfare in the Pyrenean valleys, compelling Basque chieftains to submit, was probably not the sort of warfare which would have given the Spanish warriors the sort of experience of pitched battle they needed when faced by the Arab armies.