Chipped stone tool analysis is an essential aspect of prehistoric archaeological research throughout Europe, especially in regard to reconstructing developments in technology, dietary and subsistence practices, and socio-economic systems of exchange. Intensive studies on chipped stone tools from Neolithic sites throughout the Great Hungarian Plain have been used to understand individual site use, and until more recently, fewer studies focused on synthesizing these results to model chipped stone tool variation at the regional scale. Moreover, ascertaining provenance of chipped stone tools in the region has been traditionally determined through macroscopic analysis. However, when dealing with a very homogenous material that has a large visual spectrum, such as obsidian, visual analysis can be misleading, which in turn can result in misinterpretations regarding material access, acquisition, and exchange. 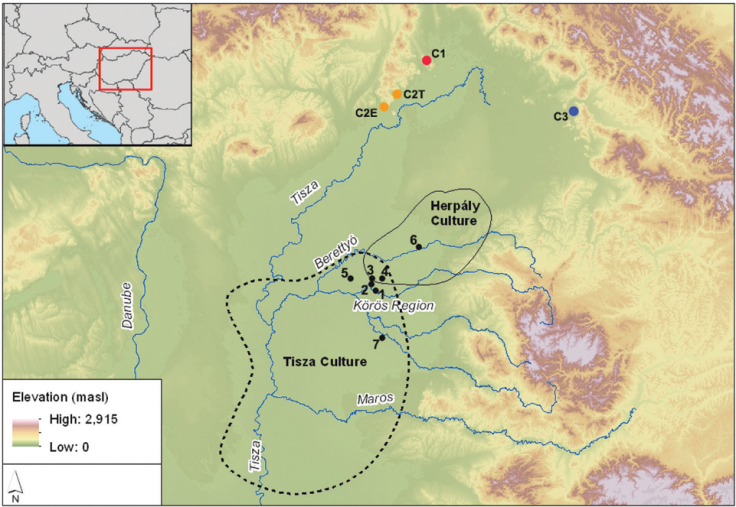 Since the 1970s, compositional studies on Carpathian obsidian sources have made it possible to geochemically differentiate the sources. Four major sources are known in the region: Carpathian 1, Carpathian 2E, Carpathian 2T, and Carpathian 3 (Figure 1).

The focus of this study is on sites located in the Körös and Berettyó River Valleys. Between these two rivers, previous research has successfully modeled the presence of a strongly enforced boundary between the Herpály and Tisza cultural units.

Exceptional research has been carried out on the lithic assemblages from many prehistoric sites in Hungary and while it is commonly accepted that exchange of some sort (i.e., down-the-line, direct procurement, and/or central redistribution) occurred in order for Late Neolithic inhabitants on the Plain to acquire geological materials for chipped stone tools, modeling this exchange has been limited in execution.

*[The Lithotheca collection of the Hungarian National Museum contains samples of geological sources from all over the world, and also samples from each of the four Carpathian sources]

The chipped stone assemblages for the seven Late Neolithic sites (Csökmő-Káposztás Domb, Szeghalom-Várhely, Szentpéterszeg-Kovadomb Szeghalom-Kovácshalom, Vésztő- Mágor, Dévaványa-Réhely-Dűlő, and Gyula-Köztisztasági Vállalat) include a total of 611 archaeological specimens. From these assemblages, Dr. Tibor Marton macroscopically identified 223 pieces as obsidian (approximately 36.49%). Twenty samples were determined to be too small for analysis resulting in the analysis of 203 obsidian archaeological samples (approximately 33.22% of the overall chipped stone tool assemblage).

Closer attention to the distribution of Carpathian 2E and 2T archaeological materials revealed that the Carpathian 2E specimens were found at the Tisza sites of Szeghalom- Kovácshalom and Vésztő-Mágor, while the Carpathian 2T samples were recovered from the Herpály sites of Csökmő-Káposztás Domb and Szeghalom-Várhely. These four sites happen to be in relatively close proximity to one another Because the sites are closely located, it stands to reason that distance to the geological locales was not a causal factor for the variation in source exploitation. Rather, the variation may be related to socio-cultural differences between the Herpály and Tisza cultural units.

Based on the predominance of obsidian from Carpathian 1, it appears that the material from this source was more accessible and/or more desirable to inhabitants at sites in the study. Previous compositional studies in the region have noted that the Carpathian 1 source was by far the more heavily exploited source in prehistory; however, what remains unclear is why the Carpathian 2E and 2T sources were exploited to a lesser extent across the Great Hungarian Plain.

Contrary to what is illustrated with Carpathian 1, the overall number of pieces from the other sources suggests that either access was limited to the Carpathian 2E and 2T sources or the Carpathian 2 sources were less desirable. Notwithstanding, the exclusivity of the Carpathian 2E materials at Tisza sites and Carpathian 2T materials at Herpály sites demonstrates a potential sociocultural preference for or limited access to these secondary sources. This exclusivity combined with the argument of limited access suggests that obsidian might have been a material that was used to actively reinforce sociocultural boundaries during the Late Neolithic.