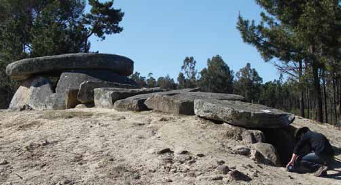 In this post we present selected parts of the very informative paper titled: “Landscape and Astronomy in Megalithic Portugal: the Carregal do Sal Nucleus and Star Mountain Range“, by Fabio Silva, 2012.

“The Mondego platform of central Portugal is bordered by the Central Massif to the southeast, the Marginal Massif to the west and northwest, and the Douro basin to the north. The area covers most of the drainage basins of the upper Mondego, the Vouga and part of the Douro rivers. The Central Massif, especially Star Mountain Range, offers good pastures during the spring and summer seasons and has evidence of human usage since the fifth millennium BC. Shortly after this early Neolithic occupation, megalithic dolmens and tumuli began to punctuate the surrounding landscape and are especially concentrated around the most important rivers of the region.

Passage graves, dolmens and other megaliths throughout the Atlantic façade of Europe are located and oriented according to the landscape, but also towards particular astronomical events. In the 1980s Michael Hoskin surveyed dolmens in this region of Portugal and concluded them to be loosely oriented towards sunrise/climb at the moment they were built.

Evidence for the occupation of the Mondego platform prior to the Neolithic is scarce. To the northeast, in the Coa valley, famous for its Upper Palaeolithic open-air rock art sites, a few microliths, possibly Mesolithic, were discovered underneath levels with ceramics and polished stone. These levels have been radiocarbon dated to about 6400-6100 BC. In Oliveira do Bairro, in the Vouga basin, and close to where the coastline would have been at the onset of the Holocene, microblade finds have been attributed to the Mesolithic, at about 6500-5500 BC. Based on these finds Cruz (2001) considers that the Mondego platform was not devoid of Mesolithic occupation but that most settlements in the Vouga and Mondego basins would most likely be now submerged or destroyed by the rising water levels.

Discoveries of the past twenty years, especially of Neolithic settlements in the Mondego basin, have allowed a picture of local life during the fifth millennium BC, the Early Neolithic, to emerge. Pottery fragments attributed to this period show characteristics belonging to the traditions of the Early Neolithic from Estremadura, to the southwest, and Andalusia, to the southeast. Based on this, Senna-Martinez and Ventura (2008) suggest the possibility of a dual origin. However, considering the scarce but increasing evidence for pre-Neolithic occupation of the region, continuity cannot be discounted and the pottery evidence might simply indicate the existence of trade.

Radiocarbon dates indicate that the first megaliths were built roughly a thousand years after the first Neolithic communities showed up in the region. Senna-Martinez and Ventura (2008) suggest a division between Middle and Late Neolithic monuments. The first phase (4,000-3,500 BC) would be characterized by tumuli with a small polygonal chamber and a short corridor or none at all. Megaliths of the second phase would have been built during the Late Neolithic (3,500-3,000 BC). These are generally bigger and possess developed corridors with heights that are different to those of the chambers, usually composed of 7 or 9 orthostats, and include more complex and differentiated scenic spaces.

Throughout the vast region and time period under consideration the depositional assemblages are quite limited. Microliths, blades, polished stone axes and beads are universally present, whereas ceramic is notable for its absence, even though it shows up in other contexts. Arrowheads are also found in the younger and more complex monuments, of about 4,000 BC, once again in-line with the introduction of this artifact in the Iberian northwest.

The Late Neolithic is thus not so much characterized by new architectural styles but by the presence of new depositional artifacts, suggesting an increase in complexity of the funerary rites. New elements include novel pottery styles, projectile points, blade sickles and flint daggers, which are also found in known settlements that have been radiocarbon dated to the same period.

Settlements in the Mondego basin appear in close proximity to the dolmens and suggest an autumn and winter occupation, as evidenced by the presence of central hearths and earth ovens where acorns were roasted.

The archaeoastronomical survey of the orientations of the dolmens conducted by Hoskin lends further credence to this seasonal model (Senna-Martinez et al. 1997). The measured orientations were interpreted as solar alignments to either sunrise or sun-climb (that is, alignments to the sun shortly after sunrise) (Hoskin 2001). For the Mondego dolmens, which exhibit a preference for south-easterly orientations, and thus for autumn/winter sunrises, this seems to fit the hypotheses of the archaeologists. However, the dolmens in the other basins of the region exhibit a preference for slightly north-of-east directions, which can only fit an early spring/late summer sun.

Carved face of the backstone of Dolmen 2 do Chão Redondo

During the spring of 2010, thirty-one dolmens of the Mondego platform were surveyed for the orientation of their entrances and/or corridors. Five more sites were surveyed in 2011, bringing the total to 36 monuments.

With the azimuths and horizon altitudes it is convenient and standard in archaeoastronomy to convert these measurements to a single value, the declination. The declination is the equivalent of latitude on the celestial sphere: it is an angular measure of how far from the celestial equator the point being considered is, measured along a line that is perpendicular to this equator. Objects lying on the celestial equator will have zero degrees of declination, whereas those at the celestial poles will have ninety (positive for north, negative for south). This simplifies the search for astronomical events along those orientations as well as allowing the comparison of monuments in different geographical regions, as the conversion takes care of the differences in latitude between the sites.

The survey finds good agreement with previous measurements by Hoskin (Silva 2010). Differences in architectural style and depositional assemblages suggest that the regions of central-north and central-south Portugal, defined by the Vouga, Paiva, Torto and Coa rivers and the Mondego river basin respectively, were inhabited by different people.

The nucleus of Carregal do Sal is located on the northern bank of the Mondego valley, a mere kilometre and a half from the riverbed. It is composed of eight of the measured dolmens, as well as several as of yet unsurveyed smaller ones and other tumuli.

By looking at the horizon profiles of the eight surveyed dolmens of Carregal do Sal it quickly became clear that only Orca da Palheira didn’t have a distant horizon -the view was obstructed by local topography. Out of the remaining seven, Ameal 1 and Ameal 2  are small dolmens without corridors, and there are still open questions regarding the orientation of their entrances, whereas the window of visibility of Orca das Pramelas  could not be surveyed at the time. This leaves only four dolmens: Orca de Santo Tisco, Orca do Outeiro do Rato, Orca do Santo and Dolmen da Orca. The entrances of all of these are oriented towards a particular mountain range in the SE direction: Serra da Estrela (Star Mountain Range), which contains the highest peak in continental Portugal.

Besides having potentially ritual and funerary functions, the dolmens of the Mondego valley also marked the winter territories of their builders, whereas Star Mountain Range, in the horizon, marked their summer pastures. It seems that both man-made and natural landscape markers were anchoring the seasonal movement. The orientation of the Carregal do Sal dolmens towards Star Mountain Range, then, makes sense from a landscape/spatial perspective.

This, however, does not preclude the possibility of an astronomical event marking the seasonal movement temporally. Considering the lack of well-defined solar or lunar explanations for the peak of the distribution one can explore whether, at the time of the megalith builders, any bright stars would rise in that range.

The only bright stars that, around 4,000 BC, rose in the neighbourhood of the mysterious -11º peak are Betelgeuse and Aldebaran, in the modern constellations of Orion, the Hunter, and Taurus, the Bull, respectively. Both stars are the brightest in their respective constellations (apparent magnitudes of 0.45 and 0.87 respectively) and both are coloured red even to the naked eye.

Axial precession, also known as precession of the equinoxes, is a wobble of the Earth’s axis against the celestial sphere, over very long periods of time. For an Earth-bound observer it would look like the background of stars, as a whole, is moving very slowly. But the stars themselves also have an intrinsic movement, called proper motion, which is different for different stars. These two factors conspire to move the stars around over periods of thousands of years so that today they do not rise and set where they rose and set six thousand years ago.

Both Betelgeuse and Aldebaran, in the period 4,300-3,500 BC would thus be seen to rise from within the chambers of the four dolmens, even though only a glimpse of Betelgeuse would be possible from Orca do Santo, as the star would have risen very close to the right-hand side of the window.

Generally, one can say that Aldebaran reappeared in the eastern sky in late April/early May, whereas Betelgeuse did so in late May/early June.

The seasonal model states that, in the spring and summer, the dolmen builders would take their ovicaprids to the high pastures of Star Mountain Range to take advantage of its grazing grounds. If the dolmen-builders were observing the heliacal rise of these stars, as is here proposed, they could have used it as a temporal marker for their transhumant movement to high pastures. The period of invisibility of the stars would provide the perfect amount of time to make preparations for whatever rituals were going to be enacted in the dolmens, as well as for the move to higher grounds. Although both identified stars can fit this picture, it can be argued that Aldebaran, with its earlier heliacal rising, just a month after the Vernal Equinox, fits this picture better than Betelgeuse.

Although not as monumental as Stonehenge, Avebury or Newgrange, the Iberian dolmens still demonstrate some level of cultural unity across vast areas, as well as regional diversity in both architectural elements and in the orientation of their chambers and corridors.”

2 thoughts on “Megalithic Portugal: Possible astronomical orientation of the Carregal do Sal dolmens”