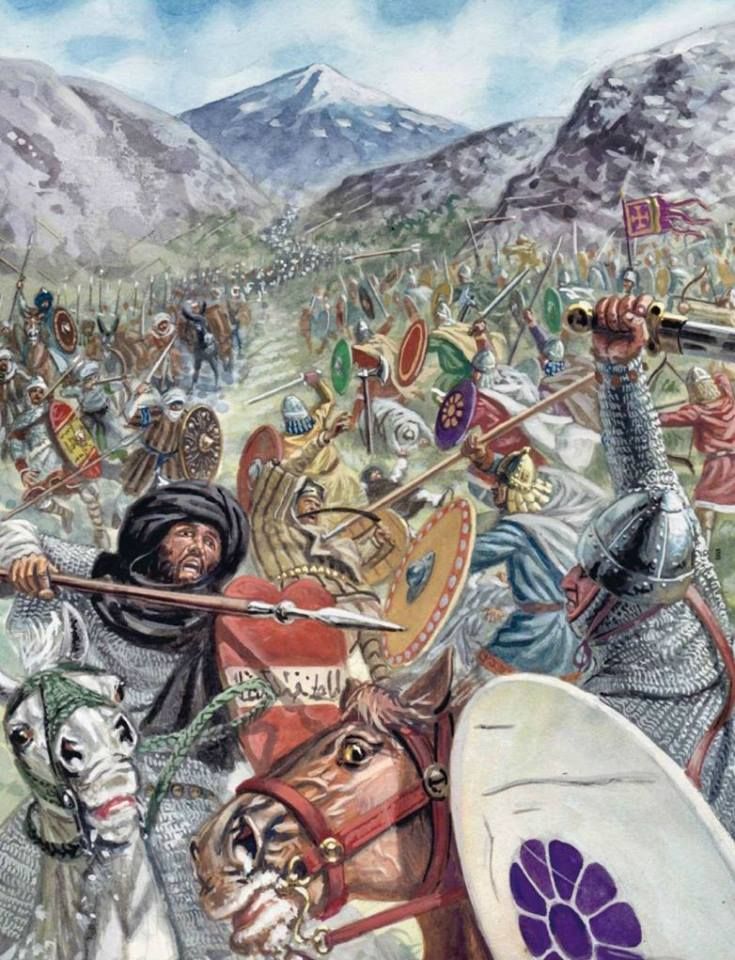 After the peace of 628 the Roman and the Persian Empires, drained of men and money, and ravaged from end to end by each others marauding armies, sank down in exhaustion to heal them of their deadly wounds.

Never before had either power dealt its neighbour such fearful blows as in this last struggle: in previous wars the contest had been waged around border fortresses, and the prize had been the conquest of some small slice of marchland. But Chosroes and Heraclius had struck deadly blows at the heart of each other’s empire, and harried the inmost provinces up to the gates of each other’s capitals. The Persian had turned the wild hordes of the Avars loose on Thrace, and the Roman had guided the yet wilder Chazars up to the walls of Ctesiphon. Hence it came to pass that at the end of the war the two powers were each weaker than they had ever been before. They were bleeding at every pore, utterly wearied and exhausted, and desirous of nothing but a long interval of peace to recover their lost strength.

Precisely at this moment a new and terrible enemy fell upon the two war-worn combatants, and delivered an attack so vehement that it was destined to destroy the ancient kingdom of Persia and to shear away half the provinces of the Roman Empire.

The politics of Arabia had up to this time been of little moment either to Roman or Persian. Each of them had allies among the Arab tribes, and had sometimes sent an expedition or an embassy southward, into the land beyond the Syrian desert. But neither of them dreamed that the scattered and disunited tribes of Arabia would ever combine or become a serious danger.

But while Heraclius and Chosroes were harrying each other’s realms, the turbulent polytheists of Arabia had been converted, into a compact band of fanatics, burning to carry all over the world by the force of their swords their new faith.

In 629 the first collision between the East-Romans and the Arabs took place, a band of Moslems having pushed a raid up to Muta, near the Dead Sea. But it was not till three years later that the storm fell on the Roman Empire. Caliph Abu Bekr prepared two armies, and launched the one against Palestine and the other against Persia.

In the early engagements between the East-Romans and the Saracens the superior discipline and more regular arms of the one were not a sufficient counterpoise to put against the mad recklessness of the other. The Moslem wanted to get killed, that he might reap the fruits of martyrdom in the other world, and cared not how he died, if he had first slain an enemy. The Roman fought well enough; but he did not, like his adversary, yearn to become a martyr, and the odds were on the man who held his life the cheapest.

The moment of the Saracen invasion was chosen most unhappily for Heraclius. He had just paid off the enormous debt that he had contracted to the Church, and to do so had not only drained the treasury but imposed some new and unwise taxes on the harassed provincials, and disbanded many of his veterans for the sake of economy. Syria and Egypt, after spending twelve and ten years respectively under the Persian yoke, had not yet got back into their old organization. Both countries were much distracted with religious troubles; the heretical sects of the Monophysites and Jacobites who swarmed within their boundaries had lifted up their heads under the Persian rule, being relieved from the governmental repression that had hitherto been their lot. They seem to have constituted an actual majority of the population, and bitterly resented the endeavours of Heraclius to enforce orthodoxy in the reconquered provinces. Their discontent was so bitter that during the Saracen invasion they stood aside and refused to help the imperial armies, or even on occasion aided the alien enemy.

The Saracen horde under Abu Obeida emerged from the desert in the spring of 634 and captured Bostra, the frontier city of Syria to the east, by the aid of treachery from within. The Romans collected an army to drive them off, but in July it was defeated at Aijnadin [Gabatha] in Ituraea. Thoroughly roused by this disaster Heraclius set all the legions of the East marching, and sixty thousand men crossed the Jordan and advanced to recover Bostra. The Arabs met them at the fords of the Hieromax, an Eastern tributary of the Jordan, and a fierce battle raged all day. The Romans drove the enemy back to the very gates of their camp, but a  last charge, headed by the fierce warrior Khaled, broke their firm array when a victory seemed almost assured.

All Syria east of Jordan was lost in this fatal battle. Damascus, its great stronghold, resisted desperately but fell early in 635. Most of its population were massacred. This disaster drew Heraclius into the field, though he was now over sixty, and was beginning to fail in health. He could do nothing; Emesa and Heliopolis were sacked before his eyes, and after an inglorious campaign he hurried to Jerusalem, took the “True Cross” from its sanctuary, where he had replaced it in triumph five years before, and retired to Constantinople. Hardly had he reached it when the news arrived that his discontented and demoralized troops had proclaimed a rebel emperor, though the enemy was before them. The rebel—his name was Baanes—was put down, but meanwhile Antioch, Chalcis, and all Northern Syria fell into the hands of the Arabs.

Worse yet was to follow. In the next year, 637, Jerusalem fell, after a desperate resistance, protracted for more than twelve months. The inhabitants refused to surrender except to the Caliph in person, and the aged Omar came over the desert, proud to take possession of the city. The Caliph did not confiscate any of the great Christian sanctuaries, but he took the site of Solomon’s Temple, and erected on it a magnificent Mosque, known ever since as the Mosque of Omar.

The tale of the last years of Heraclius is most melancholy. The Emperor lay at Constantinople slowly dying of dropsy, and his eldest son Constantine had to take the field in his stead. But the young prince received a crushing defeat in 638, when he attempted to recover North Syria, and next year the Arabs, under Amrou, pressed eastward across the Isthmus of Suez, and threw themselves upon Egypt. Two years more of fighting sufficed to conquer the granary of the Roman Empire; and in February, 641, when Heraclius died, the single port of Alexandria was the sole remaining possession of the Romans in Egypt.

The ten years’ war which had torn Syria and Egypt from the hands of the unfortunate Heraclius had been even more fatal to his Eastern neighbour. The Arabs had attacked the Persian kingdom at the same moment that they fell on Syria: two great battles at Kadesia [636] and Yalulah [637] sufficed to place all Western Persia in the hands of the Moslems. King Isdigerd, the last of the Sassanian line, raised his last army in 641, and saw it cut to pieces at the decisive field of Nehauend. He fled away to dwell as an exile among the Turks, and all his kingdom as far as the borders of India became the prey of the conquerors.