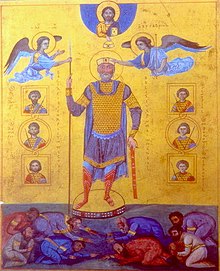 Basil II, called “Bulgar-Slayer” (Bulgaroktonos), reigned from 976–1025 as the greatest of the Macedonian emperors. This was not apparent at the beginning of his long reign. His first military expedition (in 986) against Samuel of Bulgaria, ended in total defeat at a narrow pass called Trajan’s Gate. This encouraged two rebellions, those of Bardas Skleros and Bardas Phokas. Only with the help of 6,000 Varangians (q.v.) sent by Vladimir I of Kiev were the revolts suppressed. In return, Basil gave his sister Anna to Vladimir in marriage, requiring that he convert and be baptized, which he did. Basil II tried to curb the expansion of the landed estates of great landowners (including monasteries), the dynatoi, in an effort to preserve peasant land, especially military holdings. Among his decrees (the first in 996) was one forcing the great magnates to pay the unpaid taxes (allelengyon) of their poorer neighbors. Basil further reduced the power of the provincial armies, the themes, which the military magnates controlled, by commuting army service into a money payment. The revenues he used to create a standing army, the elite forces of which were his Varangian Guard. With such troops, Basil II set out to subjugate the Bulgars while at the same time defending Antioch and Aleppo in Syria. Total victory against the Bulgars was achieved only in 1014, after a great victory in which Basil II captured 14,000 Bulgarian soldiers. Basil II blinded them and sent them back to Tsar Samuel, who was struck senseless and died two days later (on 6 October 1014). Former Bulgaria became a part of Byzantium. Toward the end of his reign he intervened in Armenia, annexing Vaspurkan and part of Iberia. At his death in 1025, there were no serious external threats on the horizon. Indeed, Byzantium seemed invincible. But Basil II was a hard act for future 11th-century emperors to follow, one that demanded harsh fiscal and foreign policies that few emperors could emulate.

Basil II, byname Basil Bulgaroctonus (Greek: Basil, Slayer of the Bulgars), (born 957/958—died Dec. 15, 1025), Byzantine emperor (976–1025), who extended imperial rule in the Balkans (notably Bulgaria), Mesopotamia, Georgia, and Armenia and increased his domestic authority by attacking the powerful landed interests of the military aristocracy and of the church.

The reign of Basil II, widely acknowledged to be one of the outstanding Byzantine emperors, admirably illustrates both the strength and the weakness of the Byzantine system of government. His indomitable and forceful personality and his shrewd statesmanship were offset by the inherent weakness of an imperial autocracy that depended so much on the character of the ruler.

Basil was the son of Romanus II and Theophano and was crowned co-emperor with his brother Constantine in 960, but as minors both he and his brother remained in the background. After their father’s death in 963, the government was effectively undertaken by the senior military emperors, first by Nicephorus II Phocas, their stepfather, and then by John I Tzimisces. On the latter’s death (976) the powerful great-uncle of Basil II, the eunuch Basil the chamberlain, took control. His authority—and that of Basil II—was challenged by two generals who coveted the position of senior emperor. Both related to emperors, they belonged to powerful landed families and commanded outside support from Georgia and from the Caliph in Baghdad. After a prolonged struggle both were defeated by 989, though only with the help of Russians under Vladimir of Kiev, who was rewarded with the hand of Basil II’s sister Anna on condition that the Kievan state adopted Christianity. Certain Russian soldiers remained in Basil II’s service, forming the famous imperial Varangian guard. Eventually, Basil II asserted his claim to sole authority by ruthlessly eliminating the dominating grand chamberlain, who was exiled in 985.

Basil II aimed solely at the extension and consolidation of imperial authority at home and abroad. The main fields of external conflict were in Syria, Armenia, and Georgia on the eastern front, in the Balkans, and in southern Italy. He maintained the Byzantine position in Syria against aggression stirred up by the Fāṭimid dynasty in Egypt and on occasion made forced marches from Constantinople across Asia Minor to relieve Antioch. By aggression and by diplomacy he secured land from Georgia and from Armenia, with the promise of more to come on the death of the Armenian ruler. He is, however, best known for his persistent and ultimately successful campaigns against a revived Bulgarian kingdom under its tsar Samuel. This ruler centred his activities in Macedonia and established his hegemony in the west Balkans. From 986 until 1014 there was warfare between Byzantium and Bulgaria, interrupted from time to time by Basil II’s intermittent expeditions to settle crises on the eastern front. Basil II enlisted Venetian help in protecting the Dalmatian coast and Adriatic waters from Bulgarian aggression. Year by year he slowly penetrated into Samuel’s territory, campaigning in winter as well as summer. Finally, holding northern and central Bulgaria, he advanced toward Samuel’s capital, Ochrida, and won the crushing victory that gave him his byname, “Slayer of the Bulgars.” It was then that he blinded the whole Bulgarian army, leaving one eye to each 100th man, so that the soldiers might be led back to their tsar (who died of shock shortly after seeing this terrible spectacle). Thus the revived Bulgarian kingdom was incorporated into the Byzantine Empire. Basil II then looked further west and planned to strengthen Byzantine control in southern Italy and to regain Sicily from the Arabs. He attempted to establish a Greek pope in Rome and to unite in marriage the German (though by birth half Byzantine) ruler Otto III with Basil II’s favourite niece, Zoe. Both schemes failed, but he was more successful in southern Italy, where order was restored, and at his death preparations were being made for the reconquest of Sicily.

The ruthlessness and tenacity that served Basil II in his military and diplomatic activities were displayed in his domestic policy as well. Its keynote was the strengthening of imperial authority by striking at his overpowerful subjects, particularly the military families who ruled like princes in Asia Minor. The by-product of this policy was the imperial protection of the small farmers, some of whom owed military service to the crown and paid taxes to the central exchequer. Title to land was rigorously inspected, and vast estates were arbitrarily confiscated. Thus, in spite of his costly wars, Basil left a full treasury, some of it stored in specially constructed underground chambers.

Both in near-contemporary history and in manuscript illustrations, Basil II is pictured as a short, well-proportioned figure, with brilliant light-blue eyes, a round face, and full, bushy whiskers, which he would twirl in his fingers when angry or while giving an audience. He dressed plainly and even when wearing the purple chose only a dark hue. An abrupt speaker, he scorned rhetoric yet was capable of wit. He has been described as mean, austere, and irascible, spending most of his time as though he were a soldier on guard. He knew only too well the danger of any relaxation. He showed no obvious interest in learning, but he did apparently commission works of religious art, and he had churches and monasteries rebuilt or completed in Boeotia and in Athens, though this may be accounted for by conventional piety. He seems never to have married or had children. On his death there was no able military aristocrat or other leader to take the situation in hand, and thus Basil II’s work was rapidly undone.