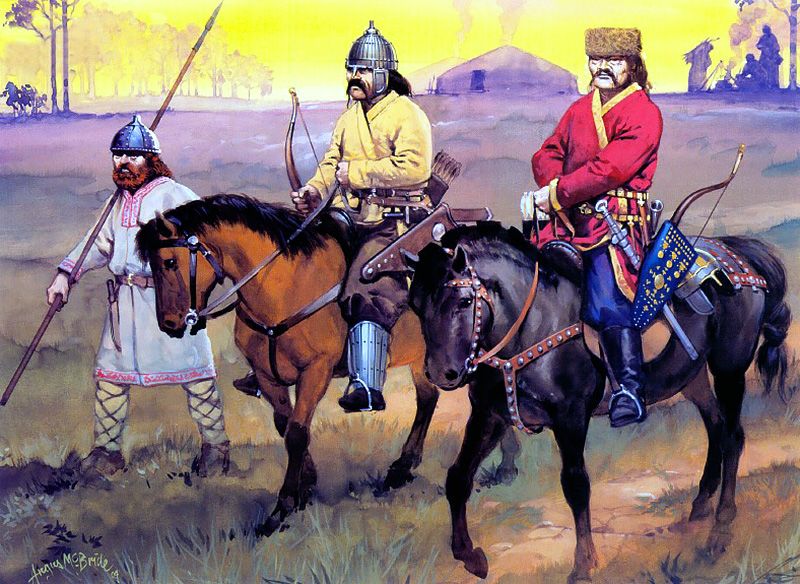 Avars were a Turkic people from the Asia steppe who settled in the plain of Hungary in 568, wresting away from Byzantium much of the Balkan Peninsula.

Strong allegiance to a single ruler, the khagan, helped to create an empire in central Europe that was a solid base from which to launch attacks on Byzantium.
Mastery on horseback gave them mobility, and their use of the iron stirrup (which they introduced to the West), often gave them the edge in battle. Their knowledge of siegecraft was such that city after city fell to them. Finally the Slavs, who the Avars dominated
and used in their raids, ended up settling in great numbers in the Balkan Peninsula, changing much of its ethnic composition. The Avars were particularly threatening in the reign of Herakleios, when in 626 they coordinated with the Persians a massive assault by land and sea on Constantinople. After that their empire declined. They were finally destroyed by Charlemagne between 791 and 795.

Avar, one of a people of undetermined origin and language, who, playing an important role in eastern Europe (6th–9th century), built an empire in the area between the Adriatic and the Baltic Sea and between the Elbe and Dnieper rivers (6th–8th century). Inhabiting an area in the Caucasus region in 558, they intervened in Germanic tribal wars, allied with the Lombards to overthrow the Gepidae (allies of Byzantium), and between 550 and 575 established themselves in the Hungarian plain between the Danube and Tisza rivers. This area became the centre of their empire, which reached its peak at the end of the 6th century.

The Avars engaged in wars against Byzantium, almost occupying Constantinople in 626, and against the Merovingians; they also were partly responsible for the southward migration of the Serbs and the Croats. In the second half of the 7th century, internal discord resulted in the expulsion of about 9,000 dissidents from the Avar empire. The state, further weakened by a revolt precipitated by the creation of the Bulgarian state in the Balkans (680), survived until 805 when it submitted to Charlemagne.