«I first met Byzantium in a pleasant little salt marsh on the north shore of Long Island. I had paused there to read a book about what was innocently called the “later Roman Empire,” prepared to trace the familiar descent of civilization into the chaos and savagery of the Dark Ages. 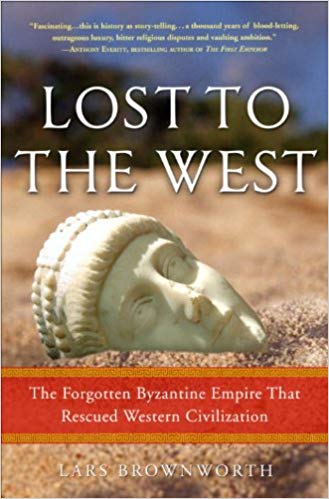 Instead, nestled under my favorite tree, I found myself confronted with a rich tapestry of lively emperors and seething barbarian hordes, of men and women who claimed to be emperors of Rome long after the Roman Empire was supposed to be dead and buried. It was at once both familiar and exotic; a Roman Empire that had somehow survived the Dark Ages, and kept the light of the classical world alive. At times, its history seemed to be ripped from the headlines. This Judeo-Christian society with Greco-Roman roots struggled with immigration, the role of church and state, and the dangers of a militant Islam. Its poor wanted the rich taxed more, its rich could afford to find the loopholes, and a swollen bureaucracy tried hard to find a balance that brought in enough money without crushing everyone.

And yet Byzantium was at the same time a place of startling strangeness, alluring but quite alien to the modern world. Holy men perched atop pillars, emperors ascended pulpits to deliver lashing sermons, and hairsplitting points of theology could touch off riots in the streets. The concepts of democracy that infuse the modern world would have horrified the Byzantines. Their society had been founded in the instability and chaos of the third century, a time of endemic revolts with emperors who were desperately trying to elevate the dignity of the throne. Democracy, with its implications that all were equal, would have struck at the very underpinnings of their hierarchical, ordered world, raising nightmares of the unceasing civil wars that they had labored so hard to escape.

The Byzantines, however, were no prisoners of an oppressive autocratic society. Lowly peasants and orphaned women found their way onto the throne, and it was a humble farmer from what is now Macedonia who rose to become Byzantium’s greatest ruler, extending its vast domains until they embraced nearly the entire Mediterranean. His successors oversaw a deeply religious society with a secular educational system that saw itself as the guardian of light and civilization in a swiftly darkening world. They were, as Robert Byron so famously put it, a “triple fusion”: a Roman body, a Greek mind, and a mystic soul.

It’s a better definition than most, in part because the term “Byzantine” is a thoroughly modern invention, making the empire attached to it notoriously difficult to define. What we call the Byzantine Empire was in fact the eastern half of the Roman Empire, and its citizens referred to themselves as Roman from the founding of Constantinople in 323 to the fall of the city eleven centuries later. For most of that time, their neighbors, allies, and enemies alike saw them in this light; when Mehmed II conquered Constantinople, he took the title Caesar of Rome, ruling, as he saw it, as the successor of a line that went back to Augustus. Only the scholars of the Enlightenment, preferring to find their roots in ancient Greece and classical Rome, denied the Eastern Empire the name “Roman,” branding it instead after Byzantium—the ancient name of Constantinople. The “real” empire for them had ended in 476 with the abdication of the last western emperor, and the history of the “impostors” in Constantinople was nothing more than a thousand-year slide into barbarism, corruption, and decay.

Western civilization, however, owes an incalculable debt to the scorned city on the Bosporus. For more than a millennium, its capital stood, the great bastion of the East protecting a nascent, chaotic Europe, as one after another would-be world conqueror foundered against its walls. Without Byzantium, the surging armies of Islam would surely have swept into Europe in the seventh century, and, as Gibbon mused, the call to prayer would have echoed over Oxford’s dreaming spires. There was more than just force of arms to the Byzantine gift, however. While civilization flickered dimly in the remote Irish monasteries of the West, it blazed in Constantinople, sometimes waxing, sometimes waning, but always alive. Byzantium’s greatest emperor, Justinian, gave us Roman law—the basis of most European legal systems even today—its artisans gave us the brilliant mosaics of Ravenna and the supreme triumph of the Hagia Sophia, and its scholars gave us the dazzling Greek and Latin classics that the Dark Ages nearly extinguished in the West.

If we owe such a debt to Byzantium, it begs the question of why exactly the empire has been so ignored. The Roman Empire fractured—first culturally and then religiously—between East and West, and as the two halves drifted apart, estrangement set in. Christianity was a thin veneer holding them together, but by 1054, when the church ruptured into Catholic and Orthodox halves, the East and West found that they had little to unite them and much to keep them apart. The Crusades drove the final wedge between them, engendering lasting bitterness in the East, and derision in the West. While what was left of Byzantium succumbed to Islamic invasion, Europe washed its hands and turned away, confident in its own growing power and burgeoning destiny. This mutual contempt has left Byzantium consigned to a little-deserved obscurity, forgotten for centuries by those who once took refuge behind its walls.

Most history curricula fail to mention the civilization that produced the illumination of Cyril and Methodius, the brilliance of John I Tzimisces, or the conquests of Nicephorus II Phocas. The curtain of the Roman Empire falls for most with the last western emperor, and tales of heroism in Greece end with the Spartan king Leonidas. But no less heroic was Constantine Dragases, standing on his ancient battlements in 1453, or Belisarius before the walls of Rome. Surely we owe them as deep a debt of gratitude»

(Source: the ‘Introduction’ of the book “Lost to the West; The forgotten Byzantine Empire that rescued Western civilization”, by Lars Brownworth)