Inconsistencies and contradictions accumulated, inhibited governmental efficiency, and intensified strains. Slow institutional change contrasted with the extreme undulations of popular moods. The institutional mechanisms through which the Byzantines developed their responses to external military challenges in the early decades of the seventh century remained essentially late Roman, modified slightly from their character in the Justinianic era, but strains were appearing.

The titulature of offices and ranks was no exception to the slow rate of change in late Roman institutions. Even more important, Heraclius probably retained or restored parts of the old administrative structure that existed before the hiatus of the Persian occupation in some eastern provinces such as Palestine and Syria. Older provincial nomenclature persisted, as did older nomenclature for some military units like the equites lllyriciani and other nutneri. Byzantine commanders continued to bear traditional late Roman titles and offices: patricius, drungarius, buccinator\ cubicularius, sacellarius, and vicarius, among others. Old recruiting practices continued in parts of the empire, and at least one section of the old imperial post was still operating in October, 610.

The government continued the late Roman practice of concentrating troops in and around towns where warranted, although there had been a tendency already in the late fourth and early fifth centuries in Syria to distribute many of them in the north Syrian countryside to avoid potential friction with townspeople. This rural distribution of troops in northern Syria anticipated what happened when precisely the same troops moved north into Anatolia in the wake of the Muslim conquest of Syria and Byzantine Mesopotamia.

Money was used in Byzantine recruiting in the 620s, but whether that was on an exceptional or regular basis is uncertain. Imperial excubitors were exercising their traditional role of scrutinizing and organizing military recruitment, while employing some kind of monetary payment or bounty as an inducement, although it is impossible to state confidently whether this was the case throughout the empire. It was also necessary to provide funds or ration allotments in kind to support expeditionary forces on campaign. Governmental land grants were not yet the instrument for raising and financing such armies. What can be established about the use of money enhances our understanding of Heraclius’ relations with the Arabs since it complements other information on the importance of money for the recruitment and the maintenance of Arabs in Byzantine service. It makes more comprehensible the significance of the payment and nonpayment of money for the mobile armies of Arabs and non-Arabs alike whom Heraclius raised to fight the invading Arab tribes from the peninsula. Problems in paying soldiers had long wracked the Byzantine armies and bureaucracy. Now they complicated and hindered the efforts to find and develop a coherent and effective defense of the provinces that the Muslims threatened. The old system was still in place but it was strained to the utmost, and urgent expedients were being taken in the effort to make it still function.

Another indication of financial trouble was Heraclius’ appointment of a sakellarios (σακελλάριος) or treasurer, whose name was Theodore Trithourios, to command the Byzantine armies in Syria. It underlines the Byzantine government’s need to assure its soldiers of its commitment to their regular and full payment of promised funds, although there was a sixth century precedent. Monetary payments were still crucial in the raising and maintenance of soldiers. There had been problems in assuring the prompt, regular, and full payment of what soldiers expected. The appointment sought to assure tight fiscal control in a situation of potentially risky and even uncontrollable outflows of money for soldiers, some standard of fiscal accountability, and Heraclius’ commitment to prompt and full payment of the soldiers for their services, as well as smooth distribution of provisions and fodder to their mounts. Although extant sources do not criticize Heraclius for appointing fiscal bureaucrats to positions of such important responsibility it is questionable whether such bureaucrats were the best choices to lead military operations at the time of the empire’s greatest external military threat to date. In the immediate wake of the catastrophic Byzantine defeat in Syria, by 640, it will be the sakellarios who oversees a general tax reassessment of remaining Byzantine lands, but whether he had gained such a role on the eve of those invasions is uncertain.

Ration allotments of grain, oil, wine, vinegar, and meats, as well as capitus or fodder, survived into the seventh century although their ultimate fate in the Byzantine period is obscure. Officials of the praetorian prefecture might determine the need and issue an order, but the unhappy responsibility for procurement and distribution of the rations to the soldiers lay with local provincial and municipal officials. It frequently was converted or commuted into monetary payments in gold or other coin, during and after the fourth century, by a process known as adaeratio. The norm for soldiers’ revenues was not exclusively monetary payment. Ration allotments in kind continued, as sources from Egypt testify. Nevertheless, there was a continuing role for money in the financing of Heraclius’ mobile armies, including those Arabs who were recruited to help to defend Byzantine Palestine and Syria. They needed funds to help defray the costs of their upkeep while under mobilization and on maneuvers during the conduct of military operations. 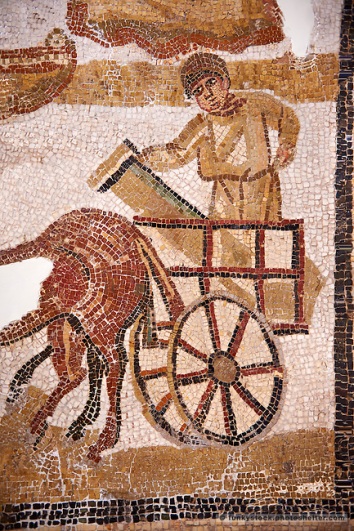 The precise relationship between Byzantine tax payments in specie and payments in kind is controversial. Large proprietors, in their role as local officials or curiales, participated in and probably profited from converting taxes calculated in gold into compulsory purchases of actual goods for the sake of the Byzantine army. Those conclusions about the fourth through sixth centuries have relevance for the conversion of money taxes into taxes in kind in the early seventh century, including the understanding of the collection and distribution of adaeratio, annonae (ration allotments), and coemptio (compulsory purchases). It is likely that large proprietors in Byzantine Syria were also profiting from distributing stipulated tax payments in kind to soldiers on the eve of the Muslim invasions. This may help us to understand more of their role in the repair of city walls and their role in the defense (and failure to defend) of certain provinces against raids and invasions. Reports of assignments of specific amounts of territory for defense responsibilities to individual families are not evidence for granting these lands to support specific soldiers; thus far there was no creation of any “soldiers’ properties” or ‘στρατιωτικά κτήματα’ of the middle Byzantine period, but instead they are symptomatic of the weakening of central governmental power, and a “privatization” of military and civilian responsibilities because of the weakening central power of the government. Privatization was no panacea and was inconsistent with some other governmental policies, such as prohibitions and restrictions on private ownership, sale, and production of weapons.

Ration allotments in kind were not always commuted by adaeratio to monetary payment. It was a mechanism by which Heraclius expected to pay and supply the soldiers whom he raised. In the 620s and 630s the Byzantine – and allied Christian Arab – soldiers who concentrated for the defense of Syria expected the localities, their municipal officials, and their inhabitants to furnish them with actual provisions, as did the Muslims to whom the same inhabitants soon capitulated. Naturally, the Muslim recipients of such payments in kind at that early date were soldiers. No thorough alteration of the late Roman fiscal and distribution system had taken place by the early 630s, for even the optio, or paymaster, of the traditional payment system still existed in Palestine in approximately 631 as a component of the essentially late Roman Byzantine army. But the harbinger of change and shakeup was the general reassessment of land by the sakellarios Philagrios immediately before Heraclius died in 641.

The payments in kind that the ninth-century Muslim historian Baladhurl mentions in his Kitab Futilh al-Buldan at the time of the Muslim conquests survived because they descended from older late Roman fiscal and logistical institutions for the maintenance of the Roman (Byzantine) army. When examined from the perspective of Islamic traditions, these appear to be authentic and represented continuity with late Roman fiscal institutions, for that is why they receive mention in Egypt, Syria, and areas of former Byzantine Mesopotamia. The late Roman system of taxation, distribution of military pay, and supplies was under strain, but it had not yet disappeared in the 630s. The very strains under which the old system labored probably contributed to its demise after the Byzantine withdrawal to Anatolia. The system was not functioning well as the melting of church plate and bronze monuments at Constantinople and Egyptian grievances testify. The existence of payments in kind and older systems of military recruitment does not itself indicate that the entire older system of military and fiscal institutions was still operating, let alone operating smoothly. There was no single coherent system. By the beginning of the seventh century many inconsistent, inefficient, and contradictory practices somehow coexisted.

How much recourse there was in the early seventh century to payments in kind is far from clear. Perhaps the Byzantine government’s shortage of money and precious metals contributed to the greater use of this system of payment in kind that still remained nominally the legally authorized system of accounting. Local officials were unready to handle unprecedentedly large numbers of Byzantine and allied soldiers and supply them with payments in kind in an area (Syria south of Chalkis, or Qinnasrln, and in Palestine) where no such large Byzantine armies had previously held exactly comparable positions in the late Roman and early Byzantine periods. Their unpreparedness and lack of cooperation explain the logistical crisis and breakdown that developed into military indiscipline and unrest on the eve of the battle of the Yarmuk in 636, which contributed to the destruction of the cohesion of the Byzantine soldiers and their eventual disintegration as fighting units. Arabs who served in groups as Byzantine allies had been entitled to allotments of rations late in the sixth century.

Financial strain was a reality. Contemporary sources do refer to financial shortages, in particular to the government’s difficulty in finding funds to pay troops, irrespective of the ethnic origin of those troops. In the short term, Byzantium was able to raise soldiers to resist the Muslims. But many of the civilian population and their leaders were very unhappy with and unwilling to assume the fiscal burden of supporting those troops even to help defend themselves and their own region.