“The influence of Byzantine culture in medieval Dalmatia was neither sporadic nor isolated, but deeply embedded in the history of this region. The province, later theme Dalmatia, was part of the Byzantine Empire during the Early Middle Ages. Eastern and Western influences together marked the development of early medieval Dalmatia. 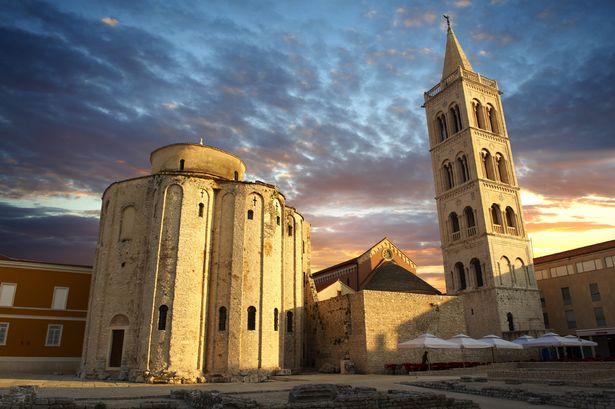 Byzantine rule in Dalmatia, with greater or lesser intensity, lasted over half a millennium. The beginning of the end was marked by the death of Emanuel Komnenos (1180), the last emperor who wanted to restore the universal Empire, and therefore focused on what once were the Western provinces: Croatia, Dalmatia and Bosnia. After the fall of Constantinople into the hands of the Crusaders in 1204, Byzantine rule in Dalmatia came to an end. However, Dalmatia remained under Eastern influence well after the twelfth century, despite its political, ecclesiastical, cultural and ethnic orientation towards the West. Byzantine Church tried to win jurisdiction of Dalmatian dioceses. However, the tradition of Latin Church in Dalmatia proved too strong for such attempts to achieve permanent results. Since the jurisdiction areas of the Eastern and Western Church had been separated earlier, the schism of 1054 had no impact upon Dalmatia. Slavonicization of Dalmatian cities, including Dubrovnik, was completed by the thirteenth century. Indigenous Romans and Byzantines, inhabitants of the settlements from Roman times and later subjects of the Eastern Empire, were outnumbered by the Slavs. However, the process of Slavonicization and the weakening of the political influence of the Empire did not imply the withering of Byzantine cultural influence. On the contrary, Byzantine legal and institutional heritage, as well as Roman cultural tradition, was built into the foundations of Dalmatian medieval communes. Roman tradition was particularly well preserved by the urban elite, but during the Middle Ages other urban strata also identified with it to a large degree. In the cultural respect, it assimilated Slavic population and distinguished the cities from their Slavic hinterland.

More than any other Dalmatian city, Dubrovnik was the meeting-point of two medieval worlds (of Europe): Western and Eastern. Dubrovnik embraced the classical Roman heritage that prevailed in Byzantium, and later its specific cultural and spiritual achievements of the Middle Ages. As a result, the city’s unique identity blends Western Christian values with the political, legal, artistic, religious and other influences of Byzantium. Similar to the rest of Dalmatia, Ragusan commune remained under dominant influence of the Roman Church throughout the Middle Ages. Newly-acquired Ragusan territories (Ston, Peljeπac, Konavle) were somewhat more exposed to the influence of the Orthodox Church, but explicit Catholic policy of the Dubrovnik administration led to a very quick restoration of Catholicism. But this Westernoriented, Catholic Dubrovnik, undoubtedly loyal to the pope, did not close its gates to the spiritual influences of the East. This is well evidenced by a succession of Eastern saints led by the patron saint of Dubrovnik himself, St. Blasius. Trade also played an important role in the ties between Dubrovnik and the Eastern Empire. Even after the Fourth Crusade, the citizens of Dubrovnik managed to maintain better relations with the Empire than with the Latin states in the East. Yet as late as 1451, when Constantinople, “a large head on a small body”, was facing its fall sealed off by Ottoman territory, the Ragusans still considered this “hope and joy of all the Greeks” an important commercial centre to have privileges in trade with. According to the bull granted by the Emperor, the Ragusans could settle in Constantinople, run their own business, have a consular representative, as well as their own jurisdiction. They could trade freely, paying only two percent customs duty on the value of goods, while they were exempt from all other tolls. However, the Empire was living its final years, trying hard to keep up former reputation based on universalistic heritage, imperial title and the importance of Constantinople as an international centre of commerce. The reality behind the dazzling façade was quite different: having lost its authority, the Empire became politically, militarily and economically dependent, primarily on Venice and Genoa.

After the fall of Constantinople, the Ragusans maintained relations with the despocies on the Peloponnese until their fall in 1460. Despots Demetrius and Thomas Palaeologus issued the Ragusans silver bulls and by doing so granted trading privileges on their territories. They traded most with the land of Despot Thomas. Ragusans were employed in his service, and he also hired Ragusan ships. In 1459, via a Ragusan Juraj Radovanović, Thomas Palaeologus sent to the Ragusans the holy relics of the right hand of their patron St. Blasius, pro remunerationem sententiorum per ipsum Georgium cum nave sua prestitorum dicto domino despoto dum ipse dominus despot infestaretur et premeretur a Turcis. Upon arrival in Dubrovnik, the ship was greeted by the Rector, nobility and citizens who, having joined in the holy procession with candles and honours, carried the relics to the church of St. Mary. The name of Despot Thomas was recorded on the reliquary, in honour of this great gift. It is worth noting that Dubrovnik prided with the possession of the reliquary of St. Blasius’ right hand as early as 1026, while in the middle of the fourteenth century the city also acquired the reliquary of the patron’s left hand. The feast of the hand of St. Blasius was then introduced, celebrated on 5 July.”

(Source: “On the influence of Byzantine culture on Renaissance Dubrovnik and Dalmatia“, by Zdenka Janeković -Römer)

One thought on “Foundations of Byzantine tradition in medieval Dalmatia”