Exercises that aimed at maintaining and promoting health are found in the Byzantine literature under the terms physiotherapeutic and training gymnasiums. Rubbing, massage and smearing are referred to as physiotherapeutic gymnastics, while a variety of physical exercises are included in the range of training gymnasiums, where in each of them indications and contraindications are mentioned. The training gymnasiums, which were recommended for health restoration and promotion, were: Walking (βάδην), running (τρέξιμο), hammock (αιώρα), horse riding, hooping (κρικηλασία), swimming (νήξις), wrestling, shadow fighting (fighting moves without an opponent – σκιαμαχία), jumps on the spot (επί τόπου αναπηδήσεις), jumping on the go (άλμα εν κινήσει), exercise with ball, boxing bag (άσκηση σε κώρυκα), lifting dumbbells (άρση αλτήρων), exercise with full warfare (οπλομαχία). Exercise as a means of promoting health is often mentioned in the context of military training, while exercise in the modern sense existed only in the army.

During the Byzantine Empire, the term sport is a peculiar term that contains a variety of motor activities with a dual meaning: Entertaining and practical. The recreational form relates to sport whose aim is to entertain, while its practical form served specific purposes, such as military training, nutrition, and health. Because of the acceptance of Hellenistic medicine by the Byzantines, healthy practices and theories of health and well-being of the body were also adopted. In this way, many of the older hygienic methods found application in the Byzantine state. The relationship that sport had as a means of promoting health was something familiar to the Byzantines, differentiated from the ancient Greek ideal, adapted in the context of their relationship with the human body. Scholars and ecclesiastical Fathers have converged views on sports as a means of promoting health.

Maurice (Byzantine Emperor, 582–602) in the Strategicon (Στρατηγικόν) emphasizes the value of sport in maintaining the strength and health of the body “… continuous training is of great benefit to the soldier…”. Going even further, he argues that “… in times of peace, hunting is necessary for soldiers …” to maintain physical preparedness and strength. According to Meletius the Monk (8th century), health is defined as the combination of wellness, beauty and completeness of the body. In the context of military training, sport is considered a prerequisite for the health and strength of the military. Leo VI the Wise (886–912) mentions in the Tactics (Τακτικά) that exercise promoted the health of soldiers, while another scholar, Nikephoros Vlemmidis (1197–1272), correlated the benefits of sport with health. Maximus Planoudis (1255–1305) argues that exercise promotes health and increases the well-being of the body. Later writers, such as Joseph the Philosopher (1280–1330), recognize that physical movement has a direct impact on biological activity. The monks’ kneecap, in the context of their spiritual activity, is an aerobic exercise exercise that has been proven to promote health and longevity.

The practical form of disease recovery was maintained and developed in Byzantium. These practices (adopted by ancient Greece) are found in the Byzantine medical texts, which are distinguished in gymnastic and physiotherapeutic methods. The latter included scrubbing, massaging and smearing, while a wide range of physical exercises were used for the gymnastic ones.

Exercise data show a continuum from ancient Greek to Byzantine times, with differences directly related to the Byzantine perception of the body.

As it emerged from the bibliographical research and review of the texts of that period, the medical texts describe therapeutic exercises which are recommended for the recovery and restoration from specific diseases. Special emphasis is given to military exercise, whose secondary benefit is the health of the army, which is an essential lever for the protection and prosperity of the state. The benefits of military training are emphasized by writers and physicians, who recommend exercise in peacetime as well, to improve the readiness and robustness of the military and promote the health of soldiers.

The exercises mentioned for the prevention and rehabilitation of diseases are strongly influenced by the Graeco-Roman tradition, since Byzantine medicine and therapeutics are based on texts from this period, at least until the 10th century. Thus, the exercises are governed by ancient Greek logic, following the orders of Philostratus, Hippocrates and Galen. Subsequent medical writers copy the original texts which they present on their epitomes, reproducing the original exercises with their indications and contraindications. Even the physiotherapeutic methods that assist in the recovery are based on such earlier scriptures and are applied without particular variations in Byzantine therapeutics.

The authors who recommend sports as health promotion and rehabilitation gymnasiums have as a basic literary reference the writings of Oribasius, who was bibliographically based on Galen, who in turn embraced and accepted Hippocrates. Many of these sport activities that are referred to as health promoters are also mentioned by Philostratus. The ancient Greek continuity is smooth and fully accepted by the Byzantine doctors.

(Source: “The therapeutic use of sport during the byzantine period”, by Nikos Stavrakakis, Evangelos Albanidis) 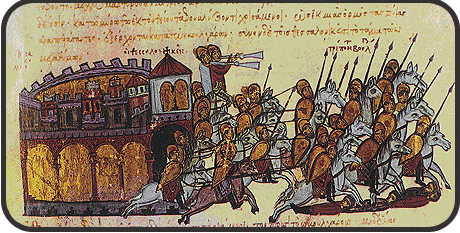