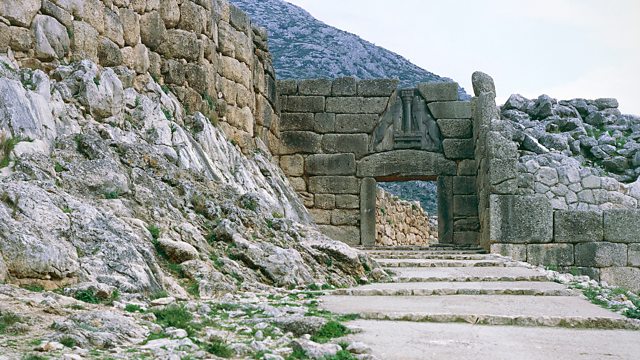 At the end of the Late Bronze Age (LBA) most Eastern Mediterranean urban centers were either destroyed or abandoned throughout the Near East and Aegean. This period of dissolution begins in the Late Helladic (LH) IIIB (1315-1190 BCE) and is complete by the end of the LH IIIC (1050 BCE). The following four centuries are typified by rural settlements, population migration, and limited long-distance trade, a period termed the ‘Greek Dark Ages’ for the Aegean region. For decades theorists have developed hypotheses to explain the drastic changes in settlement patterns at the end of the LBA. They can be divided into three broad classes: economic, military, and climatic explanations.

The collapse of Palatial Civilization at the end of the Bronze Age (1315-1190 BCE) occurred in different places at different times over the course of two centuries. Many of these destructions have been attributed to human-causes. Large population migrations took place, most famously with the incursions of the ‘Sea Peoples’ into the Nile Delta and the Levant. Following this period, societies of the Eastern Mediterranean enter into a long-term decline. By 1050 BCE, most urban centers had been abandoned. In the Aegean region the following 350 years are known as the ‘Greek Dark Ages’, where low population levels lead to little archaeological visibility.

In Egypt, several inscriptions detailed wars with ‘Sea People’ from the Nile Delta to the Levant beginning in the reign of Ramses II (1279-1213 BCE). In the southern Levant, pottery began to resemble Mycenaean types, but analysis suggests that they were locally produced, suggesting a population migration from the Aegean region to the coastal Levant. While the population movements of the ‘Sea People’ were better documented in Egypt and the Levant, they have been tied to destabilization of the Aegean region as well. The label of ‘Sea People’ is broad, and likely covered many ethnic groups, including many that were of Greek origin. Large population movements and the possible use of mercenary military forces had a destabilizing effect on the economy. Economic decline resulted in the widespread dissolution of polities. Once the polities were dissolved it was impossible to re-establish a central authority.

While economic systems collapse continues to be the dominant perspective of the collapse of Palatial Civilization in the Bronze Age, climatic/environmental explanations have also been proposed. An important consideration is the effect of earthquakes in the region. Schaeffer (1948, 1968) proposed that tectonic instability in the area could have been responsible for the simultaneous abandonment of cities in the Eastern Mediterranean. Earthquakes in the region tend to occur in clusters, and a series of earthquakes over one or two generations could have contributed to the destabilization of several polities. Many destruction layers indicate earthquake-caused damage.

Discussions of climate and the end of Palatial Civilization in Greece have focused on Carpenter’s (1966) proposed drought event. Kaniewski et al. (2010) were the first to identify a shift in climate as a factor in the changes at the end of the Bronze Age. At the site of Giala-Tell Tweini in Syria they identified the period between 1200 and 850 BCE as one of prolonged drought through pollen and alluvial records. Issar (2003) also argued that the migrations of the Late Bronze Age/Early Iron Age were the consequence of heightened aridity. More recent work also suggests arid conditions for the same time period (Mayewski et al., 2004; Finné et al., 2011)

Three additional lines of evidence suggest a prolonged arid period in the Eastern Mediterranean at the end of the Late Bronze Age and into the Early Iron Age. The first comes from oxygen-isotope speleothem data from Soreq Cave in Northern Israel  which indicates low annual precipitation during the Late Bronze Age/Early Iron Age (LBA/EIA) transition. The second is derived from stable carbon isotope data in pollen cores from Lake Voulkaria in Western Greece which record a drop in ¹³C discrimination during this period. The third is a series of Mediterranean sediment cores that record a drop in surface sea temperatures (SST) and a reduction in warm-species dinocysts.

Bayesian change-point analysis was employed to provide a statement of significance regarding the changes observed in paleoclimate records. High posterior probabilities are associated with the decline of warm-species dinocysts/foraminifera in the Adriatic and Aegean seas by 1197 BCE. Evidence for aridity through terrestrial paleoclimate proxies follows by 1050 BCE, though with low posterior probabilities. The Ionian SST record indicates a drop in temperature after 1011 BCE, after the beginning of the Greek Dark Ages. While not all records align in a straightforward manner, most are consistent with the interpretation of cooler, more arid conditions during the Greek Dark Ages. Furthermore, terrestrial records identify a known climatic event, the Roman Warm Period, to 1CE/1BCE. It is important to remember that the paleoclimate proxies that indicate this period of aridity are low-resolution records, adding uncertainty to their interpretation.

Multiple climate indices from across Europe, Asia, and Africa indicate arid conditions in the last millennium BCE as well. The period has been broadly characterized as the “Iron Age Cold Epoch” by Van Geel et al. (1996). Low lake levels suggest warm, arid conditions in Italy, the Swiss Alps and France, with the low levels occurring from 1150 to 850 BCE. Lake sediments in the Swiss Plateau and timberline fluctuations in the Swiss Alps suggest a warm period from 1250 to 650 BCE. Lowering lake levels in the peri-Adriatic region and an expansion of Quercus ilex suggest a shift to arid conditions after 1050 BCE in the Balkans. In Africa low lake levels occurred in Lake Turkana from 1050 to 150 BCE. The Sahara in Mali appears to stabilize as a severe arid climate around 1050 BCE. The dry conditions of the Chad Basin start around 1050 BCE after an earlier wet period. In East Asia, cold and arid conditions occurred at this time. A cold, arid period occurred on the Tibetan Plateau from 1050 to 550 BCE, while heightened aridity is identified in the Loess Plateau from 1150 to 250 BCE. Finné et al. (2011), in a review of 18 paleoclimate proxies, also identify cold and arid conditions in the Eastern Mediterranean at the close of the LBA.

Low Mediterranean evaporation rates would have had negative impacts on dryland agricultural systems in Mainland Greece and Crete. The long-lasting nature of these climatic changes would have put a severe stress on the ability to produce food for large populations. The collapse of LBA Palatial Civilization and the ensuing centuries of low population levels were possibly influenced by these changes in climate. Low sea surface temperatures and arid conditions let to a drop in precipitation across the Eastern Mediterranean, resulting in drops in agricultural productivity as hypothesized by Kaniewski et al. (2010).

Whatever the cause of some or all site destructions, the broader question is why these centers were not rebuilt and reoccupied following catastrophic events. The changes at the end of the LBA/EIA were far more pervasive and persistent – suggesting that longterm external processes underlie the synchronous cultural and economic decline.

The changes at the end of the Bronze Age could be better characterized as a ‘gear shift’ in Mediterranean climate. This shift in precipitation would not have been a crises event, but rather a continual stress put on human societies in the region for several generations. Climate pressure began during the LBA, and didn’t reach its nadir until the heart of the Greek Dark Ages. This change in average precipitation fits better with the economic and military interpretations of the decline in Mycenaean civilization. It provides a key external pressure for long-standing economic decline, and a motivation for population migrations such as that of the ‘Sea People’. Climate-influenced drops in food production could have destabilized Aegean Palatial Centers, resulting in internal uprisings as proposed by Andronikos (1954).

As Palatial centers fell, migrations began across the Eastern Mediterranean, leading to further destabilization of the Late Bronze Age economy. With continued declines in dry-land agricultural productivity and migration-influenced disruptions in trade, a point was reached where complex palatial center economies were untenable given the environmental and social conditions, thus resulting in a system’s collapse. Larger population migrations led to military conflict, particularly the incursions of ‘Sea Peoples’ into Egypt and the Levant. In the Levant, urban centers such as Hazor and Megiddo are destroyed by the end of the Bronze Age at 1150 BCE. However, many urban centers are reoccupied after brief periods of abandonment, indicating that the events of the Levant may have been less severe than in Anatolia or Mainland Greece. Nonetheless, Early Iron Age settlements had greater architectural affinities with pastoralist tents than Bronze Age Palatial Centers. This suggests an increase in nomadism and a punctuated break from previous urban centers.

Importantly, the collapse of LBA Palatial Civilization and the following ‘Greek Dark Ages’ may have been linked by the same climatic changes in the region. The collapse of complex social institutions at the end of the Bronze Age was in part the consequence of declines in precipitation and its cascading effects through the economy. However, the peak of aridity is not reached until well into the Greek Dark Ages. At this time populations were much lower than they were during the Bronze Age, resulting in a paucity of archaeological data for occupation relative to other periods.

The recovery of populations and the re-urbanization of Greece may have been related to innovations in agriculture. While the decline of Bronze Age Palatial civilization may have been strongly influenced by climate, the recovery of urban society in Greece appears to be more dependent upon human innovation.

(Source: “The influence of climatic change on the Late Bronze Age Collapse and the Greek Dark Ages”, by Brandon L. Drake, 2012) 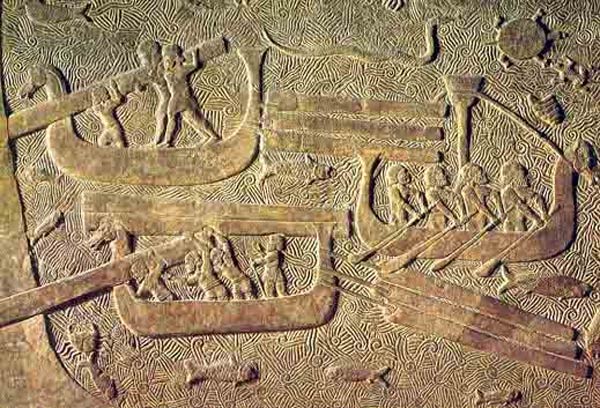 2 thoughts on “The Late Bronze Age Collapse and the ‘Greek Dark Ages’ have economic, military, and climatic explanations”