Heraclius, a very gifted and active emperor, seemed practically a model ruler after the tyrannical Phocas. He proclaimed that “power must shine more in love than in terror”,  reported the poet George of Pisidia, a contemporary, who described in good verse the emperor’s Persian campaigns and the invasion of the Avars. “Heraclius was the creator of Mediaeval Byzantium”, Ostrogorsky said, “whose state conception is Roman, whose language and culture are Greek, whose faith is Christian”. Heraclius’ achievements are the more noteworthy because at the time of his accession the position of the Empire was extremely dangerous. The Persians were menacing it from the east, the Avars and Slavs from the north, and internal affairs, after the unfortunate reign of Phocas, were in a state of complete anarchy. The new Emperor had neither money nor sufficient military force, and profound disturbances shook the Empire during the early part of his reign.

In the year 611 the Persians undertook to conquer Syria and they occupied Antioch, the main city of the eastern Imperial provinces. Soon after they seized Damascus. Upon completing the conquest of Syria, they moved on to Palestine, and in the year 614 began the siege of Jerusalem, which lasted for twenty days. Then the Persian towers and battering-rams broke through the city wall, and, as one source put it, “the evil enemies entered the city with a rage which resembled that of infuriated beasts and irritated dragons“. They pillaged the city and destroyed the Christian sanctuaries. The Church of the Holy Sepulcher, erected by Constantine the Great and Helen, was robbed of its treasures and set on fire. The Christians were exposed to merciless violence and slaughter. The Jews of Jerusalem sided with the Persians and took active part in the massacres, during which, according to some sources, 60,000 Christians perished. Many treasures from the sacred city were transported to Persia, and one of the dearest relics of Christendom, the Holy Cross, was taken to Ctesiphon. Numerous prisoners were sent to Persia, including the Patriarch of Jerusalem, Zacharias.

This devastating Persian conquest of Palestine and the pillage of Jerusalem represent a turning point in the history of this province.

According to N. P. Kondakov (“An Archeological journey through Syria and Palestine”, 173-74):

This was a disaster unheard of since the occupation of Jerusalem in the reign of Titus, but this time the calamity could not be remedied. Never again did this city have an era similar to the brilliant epoch under Constantine, and the magnificent buildings within its walls, such as the Mosque of Omar, never again created an epoch in history. From now on the city and its buildings constantly declined, step by step, and even the Crusades, so abounding in results and various spoils for Europe, caused only trouble, confusion, and degeneration in the life of Jerusalem. The Persian invasion immediately removed the effects of the imported artificial Graeco-Roman civilization in Palestine. It ruined agriculture, depopulated the cities, destroyed temporarily or permanently many monasteries and lauras, and stopped all trade development. This invasion freed the marauding Arabian tribes from the ties of association and the fear which had controlled them, and they began to form the unity which made possible their general attacks of a later period. From now on the cultural development of the country is ended. Palestine enters upon that troubled period which might very naturally be called the period of the Middle Ages, were it not for the fact that it has lasted to our own times.

The ease with which the Persians conquered Syria and Palestine may be explained partly by the religious conditions in these provinces. The majority of the population, particularly in Syria, did not adhere the official orthodox faith supported by the central government. The Nestorians, and later the Monophysites, of these provinces were greatly oppressed by the Imperial government; hence they quite naturally preferred the domination of the Persian fire-worshipers, in whose land the Nestorians enjoyed comparative religious freedom.

The Persian invasion was not limited to Syria and Palestine. Part of the Persian army, after crossing all of Asia Minor and conquering Chalcedon on the Sea of Marmara near the Bosphorus, encamped near Chrysopolis, opposite Constantinople, while another Persian army set out to conquer Egypt. Alexandria, fell, probably in the year 618 or 619. In Egypt, just as in Syria and Palestine, the Monophysitic population heartily preferred Persian to Roman domination. The loss of Egypt was a heavy blow to the  Empire, for Egypt was the granary of Constaninople. Stoppage of the supply of Egyptian grain had heavy repercussions on economic conditions in the capital.

With the heavy losses in the south and east caused by the Persian wars, there appeared another great menace in the Empire from the north. The Avaro-Slavonic hordes of the Balkan peninsula, headed by the Khagan of the Avars, moved southward, pillaging and destroying the northern provinces and reaching as far as Constantinople, where they broke through the city walls. This expedition was not a campaign, but rather a series of raids, which furnished the Khagan with numerous captives and rich spoils which he carried off to the north. These invaders are mentioned in the writings of Heraclius’ western contemporary, Isidore, bishop of Seville, who remarked in his chronicle that “Heraclius entered upon the sixteenth (fifth) year of his reign, at the beginning of which the Slavs took Greece from the Romans, and the Persians took Syria, Egypt, and many provinces“. At about this time (624) the Empire was losing its last possessions in Spain, where the Visigoths‘ conquest was completed by King Suinthila (Swinthila). The Balearic Islands remained in the hands of Heraclius.

In 622 Heraclius crossed to Asia Minor, where he recruited a large number of soldiers and trained them for several months.

Modern historians think it probable that Heraclius conducted three Persian campaigns between the years 622 and 628. All three were brilliantly successful. A contemporary poet, George of Pisidia, composed an Epinikion (Song of Victory) for the occasion, entitled the Heraclias; and in another poem, the Hexaemeron (“The Six Days”), on the creation of the world, he alluded to the six-year war in which Heraclius vanquished the Persians. A twentieth-century historian, Th. I. Uspensky, compared Heraclius’ war with the glorious campaigns of Alexander the Great. Heraclius secured the aid of the Caucasian-tribes and formed an alliance with the Khazars. The northern Persian provinces bordering the Caucasus formed one of the main arenas of military action for this reign.

While the Emperor was absent leading the army in distant campaigns, the capital became exposed to very serious danger. The Khagan of the Avars broke the agreement with the Emperor and in the year 626 advanced toward Constantinople with huge hordes of Avars and Slavs. He also formed an agreement with the Persians, who immediately sent part of their army to Chalcedon. The Avaro-Slavonic hordes besieged Constantinople to the extreme apprehension of the population, but the garrison of Constantinople was successful in repelling the attack and putting the enemy to flight. As soon as the Persians heard of this repulse, they withdrew their army from Chalcedon and directed it to Syria. The Roman victory over the Avars before Constantinople in 626 was one of the main causes of the weakening of the wild Avar kingdom.

Meanwhile, at the end of 627 Heraclius completely routed the Persians in a battle which took place near the ruins of ancient Nineveh, and advanced into the central Persian provinces, collecting rich spoils. He sent to Constantinople a long and triumphant manifesto, describing his successes against the Persians and announcing the end of the war and his brilliant victory. According to Pernice: “In 629 Heraclius’ glory was complete; the sun of his genius had dissipated the darkness which hung over the Empire, and now to the eyes of all a glorious era of peace and grandeur seemed opening. The eternal and dreaded Persian enemy was prostrated forever; on the Danube the might of the Avars was rapidly declining. Who could then resist the Byzantine armies? Who could menace the Empire?“. At this time the Persian king Chosroes was dethroned and killed, and his successor, Kawad Sheroe, opened peace negotiations with Heraclius. According to their agreement the Persians returned to the Empire the conquered provinces of Syria, Palestine, and Egypt, and the relic of the Holy Cross. Heraclius returned to the capital in great triumph, and in 630, with his wife Martina, he left for Jerusalem, where the Holy Cross was restored to its former place to the great joy of the entire Christian world.

This Persian war marks a very significant epoch in the history of the Empire. Of the two main world powers of the early Middle Ages, the Roman Empire and Persia, the second definitely lost its former significance and became a weak state soon to cease its political existence because of the attacks of the Arabs. The victorious Roman Empire dealt the death blow to its constant enemy, reclaimed all the lost eastern Imperial provinces, restored the Holy Cross to the Christian world, and at the same time freed its capital of the formidable menace of the Avaro-Slavonic hordes. The Empire seemed to be at the height of its glory and power. The sovereign of India sent his congratulations to Heraclius on his victory over the Persians, together with a great quantity of precious stones. The king of the Franks, Dagobert, sent special ambassadors to make a perpetual peace with the Empire. Finally in 630 the queen of the Persians, Borane, apparently also sent a special envoy to Heraclius and made formal peace.

Heraclius officially assumed the name basileus for the first time after the successful outcome of the Persian war, in the year 629. This name had been in use for centuries in the East, particularly in Egypt, and with the fourth century it became current in the Greek-speaking parts of the empire, but it had not previously been accepted as an official title. Up to the seventh century the Greek equivalent of the Latin “emperor” (imperator) was the term “autocrator” (αυτοκράτωρ), that is, an autocrat, which does not correspond etymologically to imperator. The only foreign ruler to whom the Roman emperor consented to give the title of basileus (with the exception of the distant king of Abyssinia) was the king of Persia. Bury wrote: “So long as there was a great independent Basileus outside the Roman Empire, the emperors refrained from adopting a title which would be shared by another monarch. But as soon as that monarch was reduced to the condition of a dependent vassal and there was no longer a concurrence, the Emperor signified the events by assuming officially the title which had for several centuries been applied to him unofficially.” 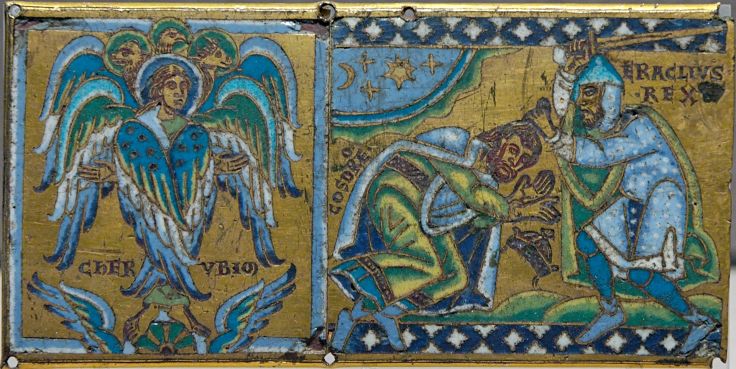 Note: For historical accuracy reasons, we have replaced the word ‘Byzantine‘ of the original Vasiliev text with ‘Roman‘ or ‘Imperial‘ or simply ‘the Empire‘.