In this post we present selected parts of the very interesting paper titled “Greco-Roman and Byzantine views on obesity“, by Niki Papavramidou & Helen Christopoulou-Aletra. 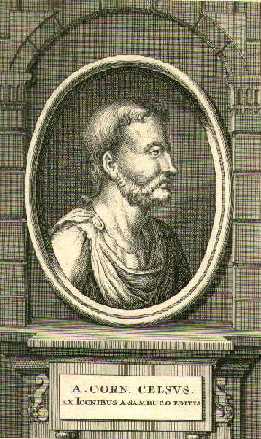 Celsus believes that a square-fit frame, neither thin nor fat, is best; a thin frame is weak while a fat one is sluggish. There is a difference between strong and obese bodies, since the former ones have more flesh and are distressed by depletion.

Celsus is more interested in treating obesity and establishing a way of doing so. He states that the body may be thinned “by hot water if one bathes in it and especially if the water is salty; by bathing on an empty stomach, by a scorching sun, by heat of all kinds, by worry, by late nights; by sleep unduly short or overlong, by a hard bed throughout the summer; by running or much walking or any violent exercise; by vomiting, by purgation, by sour and harsh things consumed; by a single meal a day; by the custom of drinking wine, not too cold, upon an empty stomach”

Celsus suggests the use of vomiting for the treatment of obesity. He specifically suggests vomiting during winter, since winter provokes the generation of phlegm and severe “stuffiness” in the head. He believes that the plethoric people and those who are bilious because of over-eating or imperfect digestion will benefit from vomiting.

Dioscorides only suggests certain food and other substances capable of emaciating obese bodies. He proposes “Asian meadow”, cheese and mustard. The flower of the “Asian meadow”, if dried, may suppress the great amount of flesh. It emaciates obese and super-obese bodies if used as a cataplasm in bathing facilities, after baths. Apart of the “Asian meadow”, the fresh and salted cheese is not as nutritious as the unsalted one, and it is suitable for emaciation of the flesh. Finally, mustard has the ability of removing phlegm from the body and emaciating it. 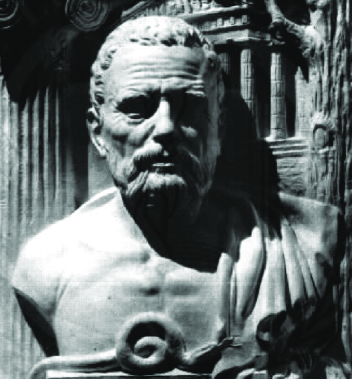 Soranus is extremely interested in the matter of obesity, which he specifies using the Greek word “polysarcia”, verifying a previously published research on Galen and obesity that stressed out the difference between “polysarkia” and “efsarkia”, where obesity may only be identified through the word “polysarkia”.

Soranus believed that obesity was a chronic disease in immediate need for treatment. He suggests a specific treatment with a combination of diet and exercise, baths, venesection, purging and a radical change in the way of living. Furthermore, he believes that difficulties in birth may also be caused by obesity, since fat narrows the passages used during childbirth.

Aelianus included (Varia historia) a very interesting description of obesity. The obese person described in the text is Dionysius of Heraclea, who lived in the 4th century BC. The reason for his obesity was his extravagant way of life and his gluttony. Aelianus reports that Dionysius was ashamed of himself and lived secluded in a small tower where he developed a huge body. Aelianus writes that Dionysius suffered from difficulty in breathing for which the physicians went on to an operation. 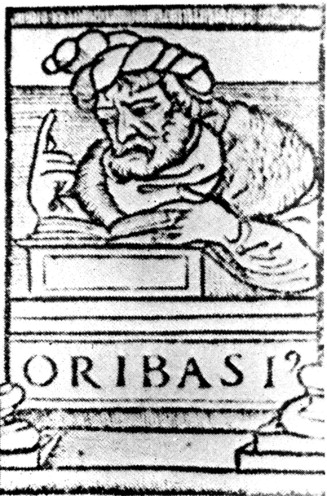 Oribasius believes that obesity results from a moist temperament accompanied by flabbiness. Extreme moisture may cause obesity not only in the case it appeared through birth but also due to wrong habits and way of life. Obesity is considered by Oribasius as a pathological condition in need for treatment through emaciation and fat reduction. He suggests altering the temperament from moist to warm, since the warm temperament renders the body lean. Then, exercise, diet, medications, baths, massage and provocation of “mental anxiety” may dry the temperament up and emaciate the body.

Aetius believes that temperaments are extremely important for health. The better temperament has as a result a healthier person. For him, the best temperament of the body is when it is in a medium between all extremes: of leanness and obesity, of softness and hardness, of heat and cold and of moisture and dryness. As with other authors, Aetius states that obesity is a strong sign of moist temperament, which, by the way, is not only congenital but can be acquired due to faulty habits.

Theophilus Protospatharius refers to obesity in his comments with respect to the Hippocratic Aphorisms. He recounts that the gymnasts tell athletes that obesity is the extreme of well-being. This is an unhealthy situation because the natural faculties do not “calm down” and such a situation equates to death, because they become jellied, having as a result hypertension and sudden digestion. So, when there is no nourishment, there can be no adhesion of the food on the tissues and when there is no adhesion of the food there can be no assimilation and death results. The faculties are harmed due to blood excess and this is why venesection should be used against “well-being”, so that the body starts the process of nourishment from the beginning. Such a process should take place in a quick pace, so as to avoid the influence of blood to the faculties and all diseases resulting from this situation, like pleurisy and sore throat. Obesity is thought to be responsible for the corruption of the natural faculties. The condition does not always have an immediate fatal result but it usually leads to death.

It is apparent that the Greco-Roman and Byzantine writers had a clear understanding of the condition that resulted from the excessive consumption of food i.e. fatness and they conceived overeating as an acquired behavior.

Generally speaking, the Greco-Roman and Byzantine views concerning the treatment of obesity adopt the Hippocratic and Galenic theories. However, these ancient ideas set the foundations for the application of the modern, conservative methods in the management of obesity where the Mediterranean diet is fully advisable with the aid of other alternative methods such as massage, baths and purgation.”