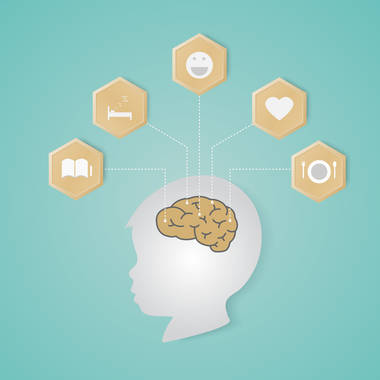 Experiences early in life have an impact on the brain’s biological and functional development, shows a new study by a team of neuroscientists. Its findings, which centered on changes in mice and rats, reveal how learning and memory abilities may vary, depending on the nature of individual experiences in early life.

“The implications of this are many, including environmental influences on mental health, the role of education, the significance of poverty, and the impact of social settings,” says Cristina Alberini, a professor in New York University’s Center for Neural Science and the senior author of the paper, which appears in the journal Nature Communications.

“These results also offer promise for potential therapeutic interventions,” add Alberini and Benjamin Bessieres, an NYU postdoctoral researcher and the paper’s co-lead author. “By identifying critical time periods for brain development, they provide an indicator of when pharmaceutical, behavioral or other type of interventions may be most beneficial.”

In general, very little is known about the mechanisms that underlie the development of learning and memory abilities. The Nature Communications study sought to shed new light on this process studying the biological elements linked to episodic memories — those of specific events or experiences — in infants by using rats and mice.

In their experiments, the scientists tested whether and how different types of experiences mature learning and memory abilities.

In one experience, infant mice and rats were placed in a small compartment — a procedure paired with a mild foot shock (a commonly used method to test memory for a context). Their memory was tested by placing them back in these compartments; if they revealed a hesitation, it indicated that they had formed a memory of previously being in the compartment.

The authors then asked two questions.

The first was: Does learning mature memory abilities?

The results showed that it does as both context and object location experiences matured the brain at both biological and functional levels. Overall, in fact, researchers found that the episodic experiences of the young mice and rats led to unique biological changes, specifically indicating maturation in the hippocampus — a region critical for episodic memory formation. However, they did not find the same changes in older mice and rats.

Furthermore, they saw that with each type of learning, context or object location, the infant animal matured its performance and became capable of remembering long-term, more like an older animal does.

“Because the biological maturation changes no longer occurred with episodic learning at later ages, it’s clear that the infant brain employs distinct biological mechanisms to form and store episodic memories,” write Alberini and Bessieres. “We found that this biological maturation is paralleled by and required for the functional maturation of memory — that is, the ability to express memory long-term.”

“Our results indicate that specific experiences during the infantile developmental period make a major contribution to individual differences in learning and memory abilities,” they add. “Although all individuals are exposed to general learning of facts, people, things, time, and spaces, and therefore must develop a wide range of abilities and competences processed by the hippocampal memory system, our data suggest that the individual history shapes the maturation of selective abilities.”

“Memory formation is important for thinking, future learning, planning, decision-making, problem-solving, reflecting, imagining, and the overall capacity to form a sense of self,” the authors note. “This means that what infants learn and experience is crucial for their later development.”