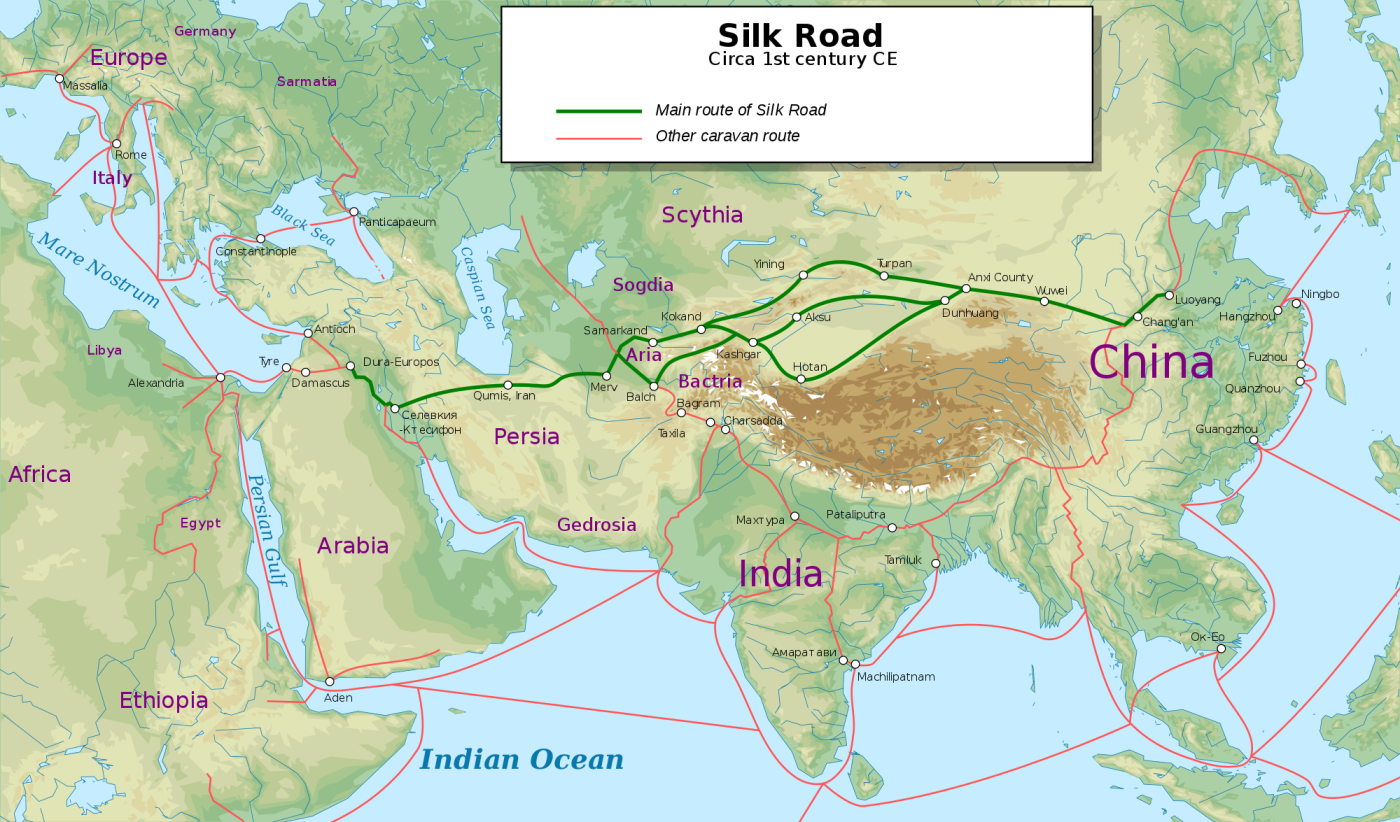 In this post we present selected parts from the excellent and very informative paper titled “Beyond frontiers: Ancient Rome and the Eurasian trade networks“, by Marco Galli (2016).

“From a historiographical perspective, it must be stressed that ‘the invention of the Silk Roads’ was from the very beginning deeply associated with the History of the Roman Empire.”

“The contacts and exchanges between the Roman Provinces and the political entities of Central and Eastern Asia are the unequivocal proof of the extraordinary activity of the trans-Eurasian networks. Moreover, these contacts prove the exceptional mobility and the great success in terms of economic profitability throughout the history of the Silk Roads.”

“The focus here is on the two opposite poles of this geographical and political system: the ancient Rome of the early centuries of the Empire (1st to 3rd century CE) and the Han dynasty in China.”

“The reconstruction of the trading routes represented a central theme in the history of the relationship between the Roman Empire and the Far East, but identifying the exact routes and trade itineraries was not an easy task.

A fundamental element for the historical reconstruction of the trans-Eurasian ‘Silk Roads’ has been the archaeological documentation coupled with the comparative analysis of the written sources, that is to say, those of the Roman and the Chinese authors. With regard to the neat distinction between overland and sea routes, we should imagine a plurality of itineraries and combinations of such routes. Chinese historians were fully aware of existing commercial sea routes linking Ta-Ch’in (the Roman Empire), Anhsi (Parthia) and T’ien-chu (India).

The most famous case of a trans-Eurasian expedition carried out on an overland route from the Mediterranean via the Tarim Basin to Chinese North-West Province is that of the well-known mission of Maes Titianos, according to the detailed account of geographer Marinus of Tyre. This journey took two years and covered an itinerary of more than 10.000 km.

Maes Titianos was most probably a Roman merchant, but of Greek descent born in Asia Minor, who moved to the city of Hierapolis in Roman Syria. Around 100 CE, Maes Titianos sent a number of agents in a mission towards the East that passed through Central Asia. The final destination of the expedition was the city of Sera Metropolis, most probably to be identified with the ancient city of Wu-Wei. It was assumed that Maes Titianos’s main objective was to streamline the traffic in Chinese Silk, so the mission’s main motive was economic.

These types of documented initiatives from the Western side have their corresponding counterparts in the Eastern: from Chinese sources (almost contemporaries of Maes) we learned of a similar expedition that took place in 97 CE during the rule of Emperor Ho (89–104 CE). Several Chinese texts concur on the existence of a trade envoy guided by Kan Ying that was sent to the West lands. The main objective of this mission was to reach Ta-Ch’in (the Roman Empire). The Chinese mission of 97 CE travelled mostly overland from Gandhara to Parthia, but did not reach its destination. The expedition stopped at the Western frontier of Persia, in front of the Persian Gulf, where Kan Ying renounced crossing the Indian Ocean.

Regarding both the Eastern and Western historical documentation, it is safe to say that regardless of the difficulty and the length of the journey, there are important episodes that clearly prove that there were attempts to establish contacts between the opposite poles of the Silk Roads, during the 1st and 2nd century CE.”

“at the end of the 2nd century BCE the Ptolemaic dynasty gave a strong impulse to the commercial relationship with the East by intensifying the maritime trade through the Indian Ocean; however, there is no doubt that the largest expansion (in terms of contacts) happened at the beginning of the Roman Empire.

As a matter of fact, during Augustan principate many political and military decisions are strategically aimed at promoting and protecting trade itineraries between Rome and the East. Diplomatic relationships were established especially with peoples like Parthians, Nabateans, some African and Arabian kingdoms that could act as intermediaries for exchanges between the West and the East; there are clear evidence of direct contacts with India and the Island of Taprobane (ancient Sri Lanka). Apart from Greek-Egyptians, Syrians and Microasiatic merchants, the trans-continental trade networks involved also rich businessmen from Campania and central Italy, as well as slaves or freedmen connected with the Imperial family.

The reception and consumption of Eastern goods as expression of luxuries in Roman society is widely reflected in the Latin Early Imperial literature. It is quite significant that the poets of the Augustan court mentioned many times India and the ‘Silk people’, that is, the Chinese.”

“When attempting an overall evaluation of Rome’s trade with the East,  historians have always tried to diminish its quantitative dimension. For example, the considerations of Roman authors like Pliny the Elder have been frequently underestimated. Pliny described a considerable financial deficit because of Rome’s trade with the East. The Empire had been running a trade deficit of 100 million sesterces per year for the import of luxury goods (half of that astonishing figure was destined to India alone!)”

“For a more general quantitative evaluation, we must not forget what Strabo wrote about the famous port of Myos Hormos on the Red Sea, from there 120 ships – every year – used to sail heading towards the Indian coasts.”

“We cannot conceive describing the trade relationship between Rome and the Far East without considering silk, one of the most legendary goods of the Eurasian networks. If it is true that the Romans tended to identify goods with their supposed places of origin (for example pepper is associated with India, etc.), this identification is particularly evident in the case of China: the Latin word Seres used to designate the Chinese people. The same word was used as an adjective to identify the silk: sericum ‘silk’, serica meant ‘silk garments’ or also ‘from the land of the Seres’. Finally the word sericum in the plural form serici was also a noun for ‘merchants of silk’.

It is only at the beginning of the Roman Empire that this material becomes a widespread luxury good. Hardly a coincidence then to find silk mentioned in the poems of Martial –the poet of the Roman ‘daily life’– who, at the end of the 1st century CE, speaks of silk products in Rome, as such pillows or clothes, to convey an image of wealth and sophisticated lifestyle.”

“The Silk roads to the Mediterranean combined maritime and overland itineraries. From the production centres in the territories of North-Western China, the caravans moved westward through the overland roads of the Tarim basin. From the Pamir Mountains, silk passed through Bactria, avoiding Parthia, and then down the Hindu Valley to the Northern India ports. The Periplus testifies the existence of silk and silk products in the Indian ports of the Western and Eastern coasts of India. From Muziris different routes could be taken: the most direct was crossing the Indian Ocean to reach the Egyptian ports on the Red Sea, then across the desert up to Alexandria. Another possible route was leading carriers to the port of Charax Spasinou on the Persian Gulf, and then across the desert to Palmyra. From this important city (a key hub for the caravan trade), the silk was then taken to the Syrian cities of Tyre, Sidon, Antiochia, famous centres for textile manufacturing.”

“The textile products made of Chinese silk reached the West as finished goods with typical original decorations and embroidered Chinese letters. But we know from ancient Classical sources and from the Chinese ones that once arrived in the Western cities, the Chinese silk finished products were completely unravelled and rewoven.

The new textile was extremely thin, shiny and transparent: this new creation was something that much more suited the Roman taste. It is highly significant that the beauty of these new ‘Chinese’ textiles, (re)manufactured in the Roman cities, could generate great interest and attraction in the very places from which that silk was originally being made, i.e. China.”

“According to Chinese sources, the general idea was that the Romans knew and used not only wild silkworms (i.e. different species of Mediterranean silkworms), but also ‘silkworm mulberry tree’ (i.e. the Himalayan-Chinese domesticated silkworm). Even if this last information is not true (this happened first only from the 6th century CE), the authors are aware of the unravelling and reweaving of Chinese Silk by the Romans. This last example gives us an important clue on how complex and evolving, absolutely not mono-directional were the interactions and the exchanges in the Eurasian networks during the first centuries of the Roman Empire.”